Action Figure Review: Crystal Man-At-Arms from Masters of the Universe by Super7 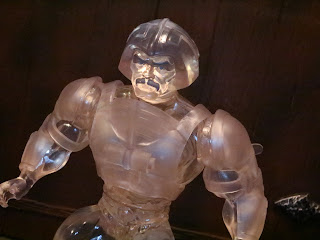 Is this the Invisible Man-At-Arms? Nope! It's Crystal Man-At-Arms from Super7's vintage styled Masters of the Universe line. I just finished looking at series 3 at the beginning of the week and now I'm checking out the small series of "statue" figures that were released between series 3 and series 4. This is really just a translucent version of the Filmation styled Man-At-Arms figure released earlier this year, but it's not just a variant for the sake of being a variant: Man-At-Arms did actually get turned into a crystal statue in the He-Man and the Masters of the Universe episode "The Dragon's Gift" (he also got turned into a crystal statue in the minicomic based on the episode). It's a slightly obscure variant, but it is kind of fun and the figure looks really cool. Let's take a look at this crystal clear version of Duncan after the break... 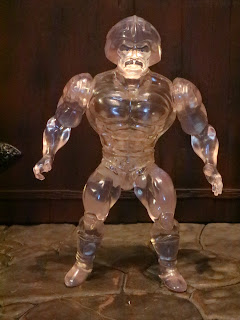 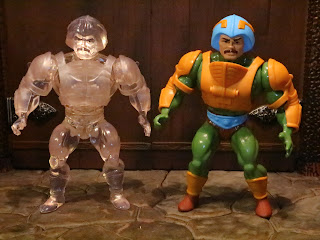 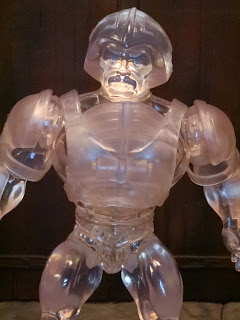 
* What you see is what you get! Well, you're also getting what you don't see, since this is a transparent Man-At-Arms. The figure is molded in a very clear plastic looks excellent. Seriously, this is a pretty cool looking figure and it definitely seems like something that folks who make customs would like to have. I could see lots of cool customs using this body. Like the standard figure, the body armor and arm guards are removable. They're not as crystal clear as the figure but they are translucent, which is quite a nice touch. 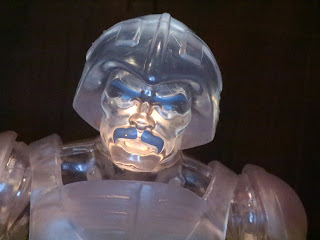 * I really like that Super7 added a touch of grey paint to Duncan's eyes, eyebrows, and mustache. While this is supposed to represent Man-At-Arms after he was turned into a crystal statue by Skeletor, the face paint applications do give the figure a bit more life. 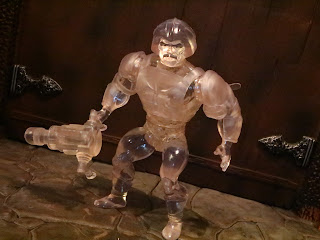 * I think this version of Man-At-Arms feels a bit smoother than the first Super7 release. Overall, the articulation is extremely similar to the vintage toys with the exception of his swivel/hinge hips (these take the place of the rubber bands of the vintage toys). Crystal MAA stands well, feels solid and sturdy, and looks great. He's definitely very eye catching! He also has the battle turn waist, and now I can see how it's done! There's a big spring inside! 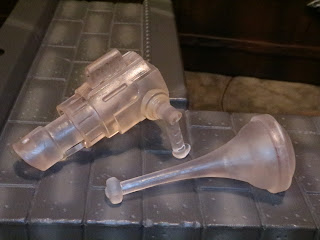 * Man-At-Arms come with both accessories from the previous release, though they're transparent, too! He has both his mace and his Stasis Ray device. 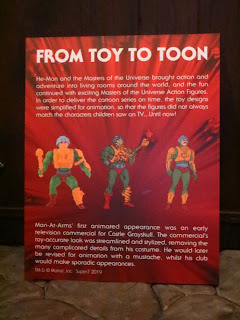 *  I really am quite fond of the art cards included with these figures. They kind of mimic the look of the minicomics in the vintage packaging but they're a simple cardstock art print. On the front is a really cool image of Man-At-Arms from Emiliano Santalucia while the back features three images of the evolution of the character from toy to cartoon star. 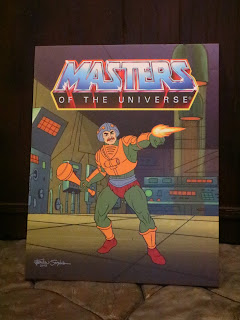 * My only complaint about this figure that's different from the regular figure is that I wish the illustration on the art card really featured Crystal Man-At-Arms. If you're going to sell a variant, go all the way and give us some new art, too! 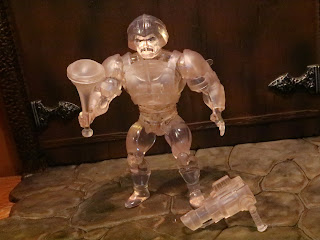 You know what? I really, really like this guy. In fact, as odd as it might seem, I think I like him a little bit more than the standard figure. If I had to pick just one for my collection I'd definitely take the standard Man-At-Arms for sure, but the coolness of the translucent appearance here just impresses me a bit more, perhaps even a bit more than it should. For being a very strange variant, this has turned out to be a Great and a 1/2 figure. It's fun, looks great, and definitely will stand out on your shelf, Seriously, this guy is worth your attention, particularly if you're just a fan of cool looking toys.