Action Figure Review: Faker (Mondo Exclusive) from Masters of the Universe by Mondo 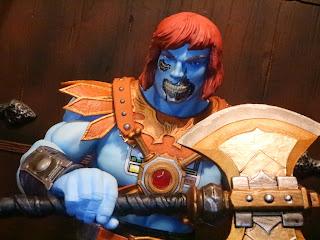 Variants and repaints are just a part of action figure collecting. Whether you're giving a character a different look or you're creating a new character out of existing parts, variants and repaints allow a company to get more mileage out of molds, which are the most expensive part of action figure production. While some repaints are often looked on with disdain, some grow to legendary status. While the Masters of the Universe line relied quite heavily on reusing parts and variants, Faker is one character who is largely just a repaint, and yet he's nearly treated as another A-list character at this point. I've previously reviewed the first two figures in Mondo's 1/6th scale Masters of the Universe line (He-Man and Skeletor) but this is the first time I'm getting to review one of the Mondo exclusive figures. Yes, this version of Faker has a new headsculpt that is unique to him. Let's take a look at the Mondo exclusive Faker after the break... 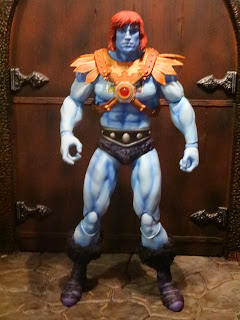 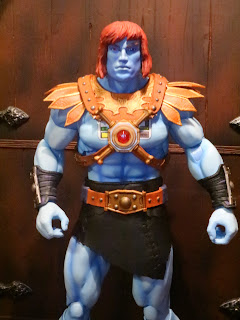 * As you would expect, Faker is mostly a repaint of the previously released He-Man figure who is now sporting Skeletor's chest armor. I've always loved Faker's blue and orange color scheme and that's exactly what you're getting here. The Mondo MOTU line definitely has the feel of a very large action figure rather than your traditional 1/6th scale figure, so Faker looks appropriately bulky and ready for action, just like you'd expect from a MOTU figure. The proportions look good and the figure has an excellent aesthetic that reminds me of what you would expect/ hope to see in a really good live-action MOTU adaptation. There are even lots of paint effects on the base body, adding definition to those robotic muscles! 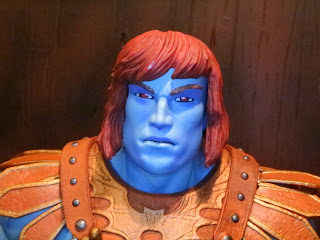 * Faker has the same headsculpt as He-Man (obviously) but I actually kind of like it more here than I did on He-Man himself. The dour expression works better with a villainous character like rather than the heroic and kind He-Man. The red hair and red eyes add another welcome splash of color to the figure, drawing your eyes to them almost immediately. 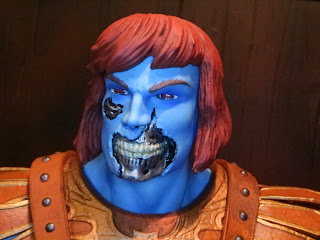 * What separates the Mondo exclusive Faker from the standard Faker is the presence of this amazing robotic headsculpt. It's very Terminator-ish, showing off the robotic skull of Faker underneath his flesh exterior. The MOTUC Intergalactic Skeletor figure came with a similar headsculpt for Faker back in 2014 and its nice to see the look catching on. The visible teeth and metal bits are really nicely done, giving something Faker something that's all his own. 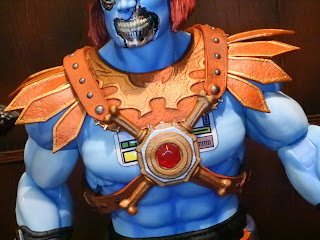 * Faker comes with Skeletor's chest armor and, boy oh boy, does it look good in orange. The multiple shades used here are gorgeous and I love the work on the rivets and the translucent red gem in the middle of the bones. So far as I can tell it isn't removable, but you can see Faker's robotic chest panel peaking out from underneath. 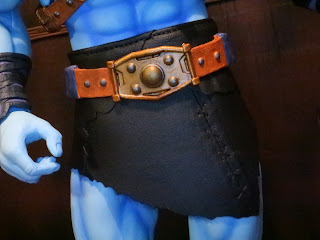 * Like He-Man, Faker has a belt around his wait which holds in place a faux-black leather loincloth. Guess what? if you like this look then you're in good shape. If you don't? It turns out that both of these are removable. Faker's waist can separate at the joint there, allowing you to take off the loincloth and the belt. 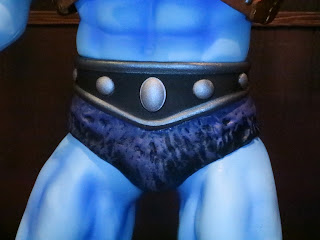 * Underneath is the traditional fur briefs with the classic metal belt. I like the other look better but 1. At least Mondo gave us an option and 2. How cool that they went with the vintage design underneath the pleather loincloth. 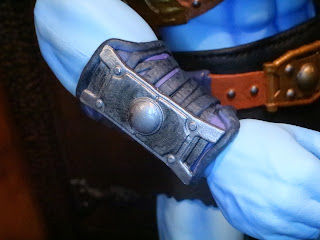 * Faker's bracers look are darker (they've got a Skeletor approved black and purple color scheme going on) and appear as if they're made of a mixture of metal and leather strips (the pieces are really just plastic, though). Remove the hands and they slide off easily. 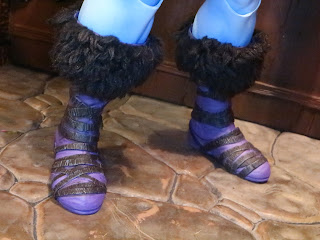 *  Just like He-Man's boots, Faker's are also incredible. Holy smokes, the paintwork really supports the sculpt to make these look incredibly realistic. What's even cooler is that the furry cuffs are actually furry! Yes, the furry cuffs are really made of soft goods to give them a realistic fur lining. I still love this! It's insane! 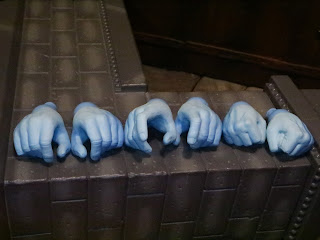 * Faker's hands swap out rather easily (they have really thick wrist pegs so no worries about breakage) and you can swap out between three pairs: Pistol grips, fists, and standard grips. The hands are actually fairly rubbery, too, making putting weapons in the hands much easier. 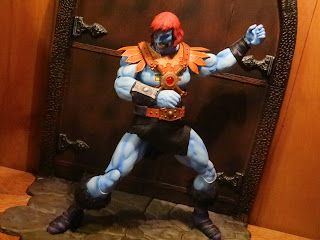 * Mondo's MOTU figures do not feel like your traditional 1/6th scale figures but more like oversized Masters of the Universe Classics figures. Faker is very heavy, but he also feels very durable. I love how sturdy this guy feels. This is a very high quality line and the toys are incredibly fun to pose and outfit with different accessory complements. Mondo definitely is doing a great job with the quality here which should inspire confidence in buyers. I've already got the exclusive Mer-Man preordered and I'm planning to order whatever they release on Halloween this year (there's a special figure drop coming!) 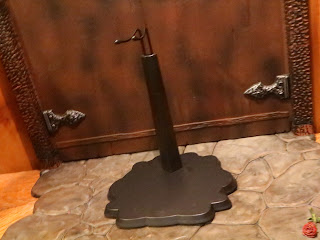 *  While you probably won't "need" it, Faker comes with the same black plastic display stand with a metal display hook that the other figures have. The hook rests under Faker's crotch to keep him standing. Aesthetically it's not the best design for a stand but it works quite well for a heavy figure like this. 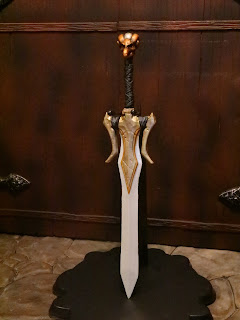 * Rather than having a copy of He-Man's sword, Faker comes with a copy of Skeletor's sword. It's more worn looking and features a ram skull pommel rather than the spiked skull of He-Man's pommel. 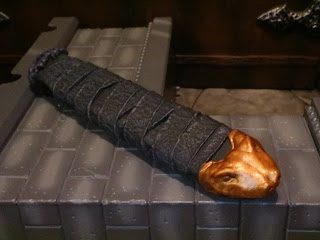 * Faker's copy of the Power Sword also comes with Skeletor's scabbard. The blade easily fits inside. The scabbard follows the design cues of the sword  and other elements of the figure by looking like a mixture of metal, wood, and leather with the bottom of the scabbard appearing to be a metal decorative element that resembles a snake! The rear of the scabbard features two removable plastic clips that can attach the scabbard to Faker's chest armor. 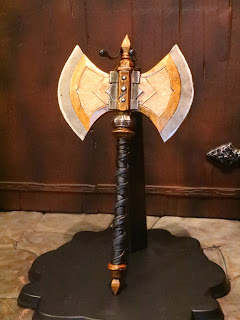 * Faker may have gotten Skeletor's sword and scabbard, but he gets He-Man's ax, only this time redone in a really cool paint scheme with orange highlights. 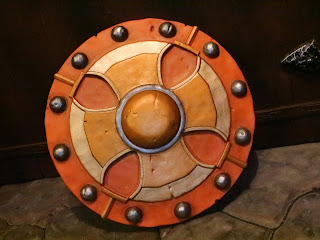 * Faker also comes with a copy of He-Man's shield, this time in an orange color scheme. While it certainly draws inspiration from the vintage toy the shield looks much grimier with a handmade appearance. I love this! It even looks like the front has some extreme weathering. I guarantee you that each accessory in this set probably has more paint applications than a standard action figure you would pick up at the store. 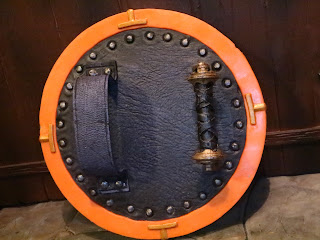 * The rear of the shield is impressive, too, as it continues to look like it's made of a variety of materials. The handle is removable, allowing you to slide the loop over Faker's arm and then place the handle in his hand, afterwards attaching the handle to the shield. This makes it easy to fit him with the shield and keep anything from breaking. Mondo did some excellent design work here as this was a brilliant way to handle this piece. 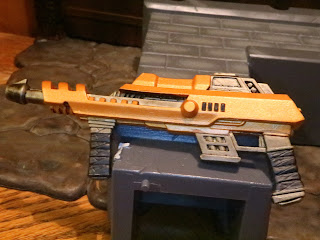 * Faker also comes with the same laser rifle that He-Man came with but now it has a variety of orange paint applications, too! Hey, that kind of makes this look like Webstor's rifle, doesn't it? 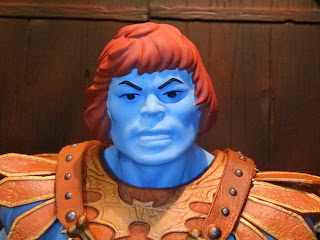 * So far each of Mondo's MOTU releases has come with a vintage styled head. While these are clearly just for fun (I really can't see anyone actually using these as their primary display portrait), I didn't really care for the look of He-Man's portrait. What can I say? I'm picky about He-Man's appearance? I do, however, like the Faker portrait. I'm OK with Faker looking a bit off and something about the blue skin makes me overlook the slightly different from the vintage face design. 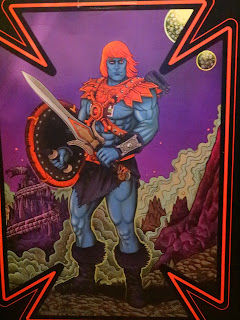 * The packaging is incredible and very collector friendly. It features a Snake Mountain themed slipcover and a magnetic five panel window box with new artwork of Faker. The packaging design is by Brent Ashe while the artwork is by Florian Bertmern. 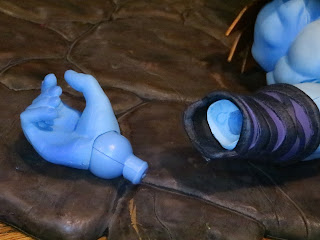 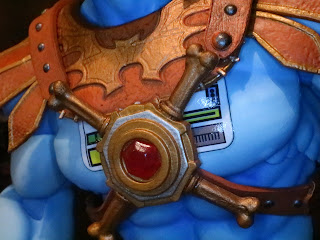 * I really like Mondo's design as they're faithful to the vintage design, but not just straight redos. That's why I was a bit disappointed that Faker's chest panel is just simply a tampographic stamp here. Also, it's not even fully visible as the armor isn't removable. I really would have liked to have seen Faker with a sculpted chest panel (maybe even a "tear away" chest panel) but we've got the stamp again, which seems far too simple for this line. 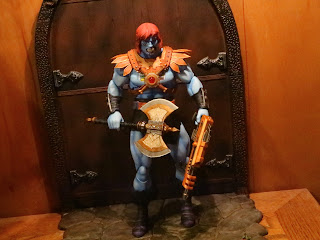 I really like this line and Faker is an incredibly cool figure but it does need to be mentioned that he comes with fewer extras than both He-Man and Skeletor. He-Man came with two extra weapons while both He-Man and Skeletor came with a companion figure. Faker is definitely a repaint, though, but it would have been nice to see a few more unique elements included with him. He's still a Great figure, though, particularly if you're getting the Mondo exclusive with the battle damaged headsculpt. Mondo has been teasing another MOTU figure dropping on Halloween and, apparently, it's not Scareglow. Who do you think it could be?


For more Faker reviews I've also reviewed the M.U.S.C.L.E. Faker from the Series 3 Pack C, the Ultimates He-Man (which came with a Filmation Faker head), the Mega Construx Faker from the Battle for Eternia Collection and Faker from Battle Bones, the ReAction Faker and Leo Faker, and the VYNL Faker.

For more Masters of the Universe from Mondo, check out the following:
He-Man
Skeletor
Posted by Barbecue17 at 10/17/2019