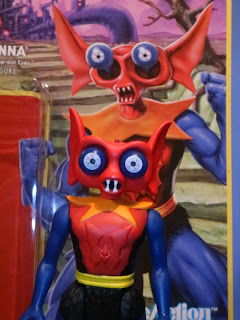 For PowerCon 2019 Super7 released a few variant of members of the Evil Horde based on their vintage toy counterparts. I looked at Grizzlor on Friday and today I'm checking out Mantenna! The Filmation based Mantenna ReAction figure was released a few months ago but now we've got one based on the vintage toy. Mantenna is one of two vintage Masters of the Universe toys that I somehow owned two of as a kid. I feel like I somehow stumbled upon a second one at a playground or something as my second vintage Mantenna has always been very, very rough looking (my original Mantenna is not, as I took pretty good care of my toys). Let's take a look at this repaint of Mantenna and see how he measures up over the break. 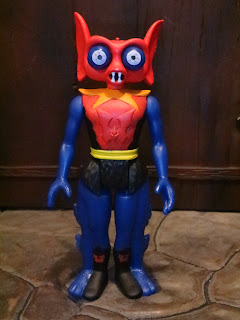 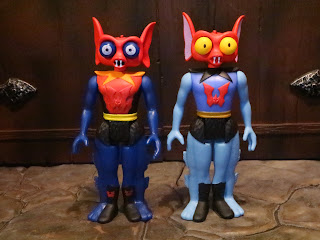 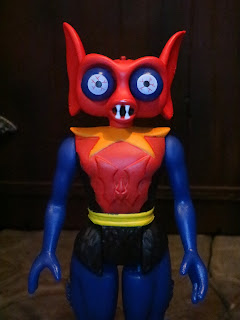 * Just like the regular figure, this Modulok is still a really nice looking figure. Whether you like the old Kenner style of action figure or just like the vintage toy inspired paintjob, Mantenna is a pretty big success. He might look a little more modern than figures from the original Star Wars line but I could see Mantenna being a figure from the mid-late 1980s, more along the actual time of the MOTU line series. The collar, Horde emblem, and furry trunks are all sculpted that are accurate to the Filmation version of the character but not really to the vintage toy. The paintwork goes a long way towards making this guy resemble his vintage counterpart, though. 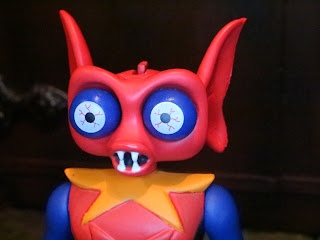 * Even though the headsculpt is based on the Filmation model for Mantenna, it still works here and I love the shape of the head and the subtle details on the ears. Of course, the eyes are also just killer.Rather than being yellow this time, now they're given the veiny look of the vintage toy. 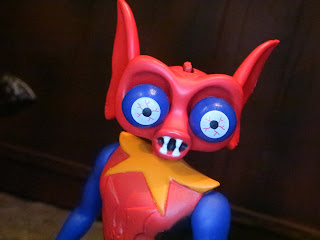 *  Here's where the action feature comes in: Mantenna has a small tab on the top of his head which allows you to slide his eyes in and out. It's amazing how fun such a little feature is! I think action features get a bad wrap because so many of them in the 90s devolved into punches and kicks that ruined a figure's articulation or unnecessarily huge missile launchers, but it's amazing how addictive a fun, non intrusive action figure can be on an action figure. 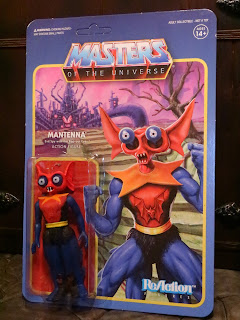 *  The card art on most ReAction figures released by Super7 is beautiful and their Masters of the Universe line is no exception. Mantenna features an awesome illustration from Jason Edmiston of the character with a new Fright Zone background.  I like how the Evil Horde got their own unique backers. To preserve the card I actually made a slit in the top of the blister so I can slide the figure in and out. It work great and allows the figure to be displayed inside and outside of the card. I've got mine hanging on a metal pegboard similar to what you'd see in a retail store! 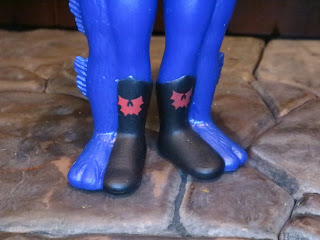 * Mantenna is supposed to have four legs but, like the vintage Mantenna, the ReAction versions legs are sculpted so that it looks like he has two legs, but each leg is actually supposed to be two separate legs. It's a cool effect and definitely seem accurate to how a hypothetical Kenner styled MOTU figure would have turned out. This version also has Horde emblems on his boots, which look fantastic (though all his legs should have the boots and Horde emblems on them). It makes me want boot with the Horde emblem on them! 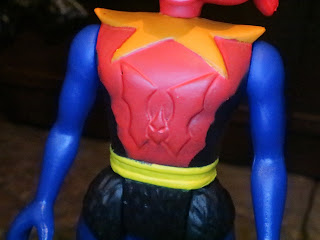 
* Super7 tried to use the paint to capture the right colors for Mantenna's torso, as the torso design itself is very different from the vintage toy. The red used here has some very messy applications, though, and you can see black peaking through at the bottom. 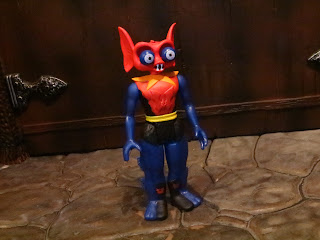 The vintage toy variant of Matenna is still a very, very nice retro styled action figure, but he's not quite a good as the Filmation Mantenna. Honestly, its the messy paintwork on his torso that kind of drops him down a little bit. He's still a Great figure, though. I really wish Super7 were giving the Horde their crossbows. What gives? I wonder why they opted to leave them out? I know the vintage crossbows were fairly large, but wouldn't smaller, Kenner inspired crossbows have been an easy solution? There's one more PowerCon exclusive toy variant coming up in the next couple of days and guess what? It's not a straight repaint! Stay tuned!


If you're a fan of Mantenna, go stand over there and check out the MOTUC Mantenna, the Filmation inspired Club Grayskull Mantenna, and the ReAction Mantenna.