The Scream of 31 Days of Toy Terror: Ultimate Michael Myers (Halloween 2) from Halloween by NECA 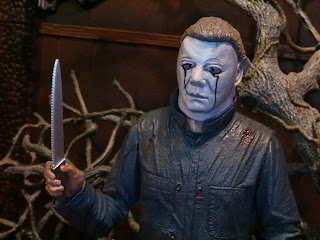 Happy Halloween 2019! I hope you have some incredible plans today and make the most of this fun, spooky day! Today I'm very excited to check out not just one of my most anticipated action figures of the Halloween 2019 season but one of my most anticipated figures of 2019 overall: Michael Myers from Halloween II! Back in the mid 2000s NECA did release a few action figures based off of the original Halloween and Rob Zombie's 2007 remake, but between then and 2019 NECA has been pretty quiet on the Halloween front. Things have changed, though, and now we have action figures from 2018's Halloween an 1981's Halloween II with figures coming from Halloween III: Season of the Witch. NECA has been very faithful here, definitely ensuring that this is a Halloween II Michael Myers and not a figure from the original film (although I hope they are able to release some figures from that film soon). With two more sequels scheduled for Halloween 2020 and 2021, the Halloween franchise is in a great place right now and NECA can hopefully get busy bringing us some more Ultimate goodness. Let's check out this version of Michael Myers after the break... 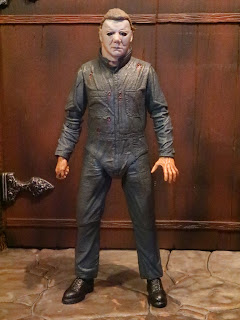 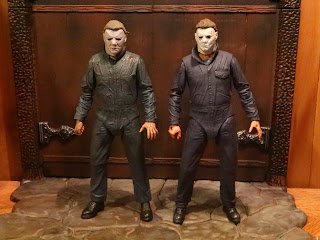 * On the left is the Halloween 2 Michael while the Halloween 2018 Michael is on the right. There actually is a little bit of reuse here, but it makes sense and still keeps both figures accurate. They share the same upper legs and upper arms. Everything else is new. Looking at these two together, it's also easy to see the difference in the colors of the suits. Michael Myers' suit in the original films looks blue but is probably green in actuality. The newer suit is definitely the more recognizable blue color, though. 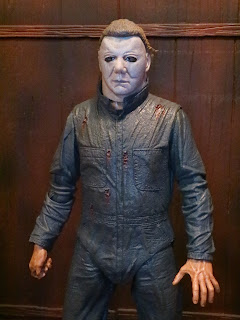 
* Michael Myers looks very physically imposing, as he should! His suit is wonderfully detailed and features bullet holes and blood stains from were he was shot by Dr. Loomis at the end of the original film/ beginning of the second. The color of his suit, while definitely still blue, is a bit more bluish green. In reality, that's probably a bit closer to the actual color of the suit but the lighting in the film definitely makes it look blue. 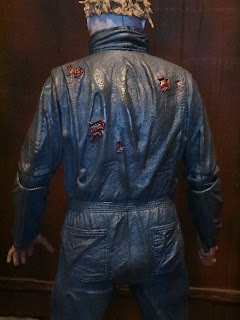 * The rear of the suit not also continues the excellent details in the wrinkles and creases on the suit but it also shows the exit holes of the bullet wounds Michael suffers. Nice detail! 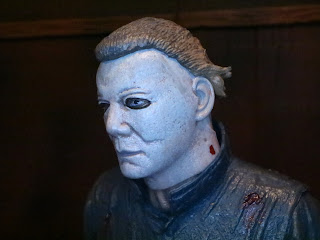 * Michael Myers comes with three heads that you can swap out to give the figure three different looks. Heck, one of them isn't even Michael Myers! First up, though, is the standard Michael Myers head. Halloween II used the same as as the first movie although it did suffer some wear during the first film. Actor Dick Warlock also had a much larger head than Nick Castle, who played Michael in the first film, so the mask looks puffier. NECA captured this perfectly, even giving Michael the bloody hole in his neck from where Laurie stabbed him with the knitting needle. 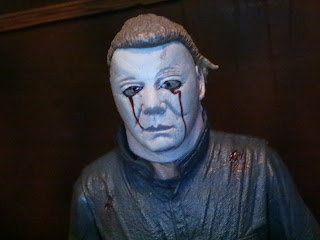 * Michael's second headsculpt is from the end of the film and features the "blood tears" dripping down from his eyes after Laurie shoots him. This is the same sculpt as the first head, but it has the bloody eyes and blood trails running down to differentiate it. The paintwork on both heads is great and the mask doesn't look nearly as puffy in person as it looks in photos capturing only one angle. It's a pretty good likeness with nice definition on the mask "facial features." 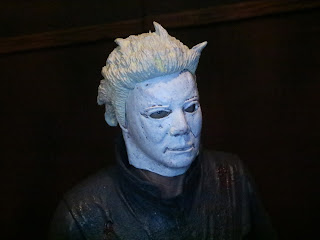 * One of my favorite accessories this year is this alternate headsculpt because it's not Michael Myers; it's Ben Tramer! Yes, the boy that Laurie mentions she has a crush on in the first film and who gets hit by a police car and caught in an explosion because he doesn't look both ways before crossing the street now has an action figure. I love the look of this one! The headsculpt shows a mask clearly being worn by a thinner headed person, the hair is blonde and styled differently, and the mask looks less weathered and sinister. 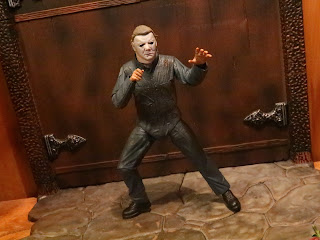 * The articulation model is the same as the Halloween 2018 Michael Myers, even though there are very few shared parts. It's quite good here, doing well capturing both subtle and more action oriented poses. The double hinge elbows really allow for some great expressive poses, as does the balljointed neck. Michael Myers is a solid, quality figure which is definitely par for the course for NECA these days. NECA is on fire lately! 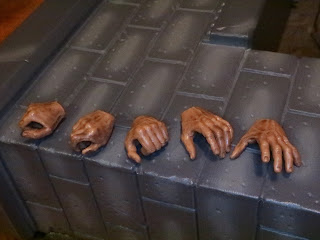 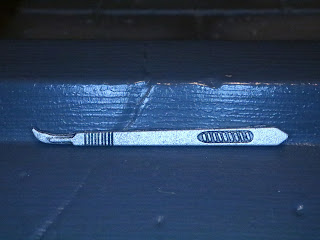 * NECA's Ultmate figures usually come with plenty of weapons, particularly when it's a homicidal maniac we're dealing with. Michael comes with four tools of mayhem, the first of which is a scalpel. It's a great sculpt and he can hold it really well thanks to one of the hands that features a tighter grip. Michael picks this up at the Haddonfield Memorial Hospital and attempts to kill both Laurie Strode and Dr. Loomis with it. Michael more successfully kills one of the nurses using it, as well as the federal marshal sent to escort Loomis back to Smith's Grove. 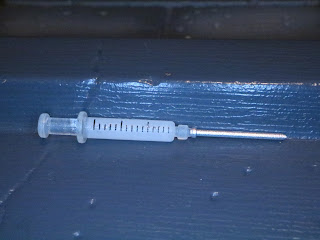 * Michael also uses a syringe a few times in the film, including one time when he stabs Dr. Mixter in the eye. Yikes! The syringe is really nicely made. It's molded in translucent plastic, has a painted silver needle, and even has dosage lines on the sides. 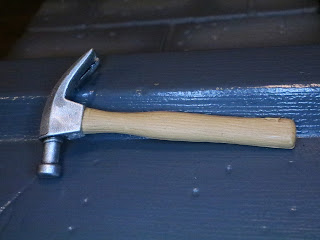 * Michael's third weapon is a hammer. He uses this to kill the hospital security guard. The Halloween 2018 Michael Myers also comes with a hammer, but this one is a completely different sculpt from that one. Considering this is a one-off weapon, NECA sure did a fantastic job capturing it. It looks like an honest to goodness real hammer that has been shrunk down. The paint on the head is excellent! 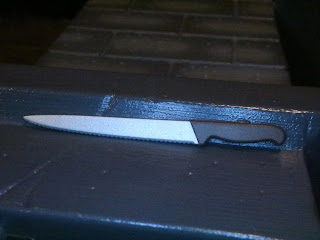 * Last, but not least, Michael comes with the knife he swipes from the old lady making sandwiches at the beginning of the movie while he's still roaming the streets of Haddonfield. It's much longer than the chef's knife he uses in the first film and looks like it's serrated, too. 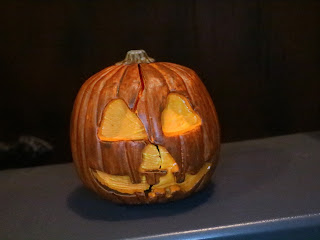 * Here's another accessory that could easily be an accessory of the year contender: The Jack O' Lantern from the opening credits. It doesn't light up but it's a great sculpt and captures the creepy look of its film counterpart very well. I love the paintwork on the pumpkin! 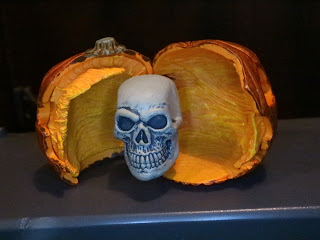 * Guess what? The Jack O' Lantern actually opens up, just like in the opening credits, and reveals a skull. Don't you love this? I do. I love it! This is definitely one of my favorite action figure scaled pumpkins of all time. That skull is so cool, as is the detail of the insides of the pumpkin. 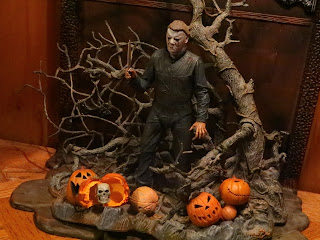 This Michael Myers is pretty tough to beat. Three alternate heads, excellent articulation, four weapons, and a Jack o' Lantern that opens to reveal a skull. I mean, how much better can you get? NECA has been loading down their Ultimate releases lately and they just keep getting better and better. The Halloween license may not have as much variety as some horror licenses but it definitely could give NECA a long string of hits for the foreseeable future. This is an Epic version of Michael Myers and the first specifically from Halloween II. I was worried it wouldn't make it out before Halloween, but it totally did. Pick this one up as it's a real treat!