The Scream of 31 Days of Toy Terror: Ultimate Laurie Strode from Halloween by NECA 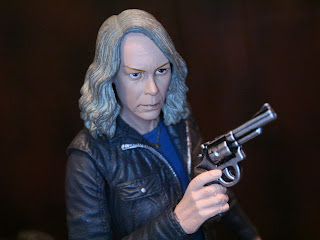 The Scream of 31 Days of Toy Terror isn't just about the monsters and maniacs of the silver scream! Sometimes it's also about those brave souls that have to hunt them down and take them down! Today I'm checking out NECA's Ultimate Laurie Strode from Halloween 2018 and, let me tell you, this has been one of my most anticipated action figures of the year. I love Halloween and I was quite pleased with last year's film, so getting a chance at Laurie Strode based on Jamie Lee Curtis' appearance as a one-woman Michael Myers hunting machine was not something I was going to pass up. While I'd really love to see NECA at least go back and make Laurie and a new version of Dr. Loomis from the original film, this version of Laurie Strode is still a very welcome addition to any horror collection. Any Halloween film with Jamie Lee Curtis in it has definitely proven to be among the better/ best entries in the series, so I have high hopes for Halloween Kills and Halloween Ends. I've had this figure since the summer and it has killed me to wait this long to post a review but I wanted to make sure that The Scream of 31 Days of Toy Terror was a thrilling and as special as it could be. Ready for a closer look at Laurie Strode? Then join me after the break... 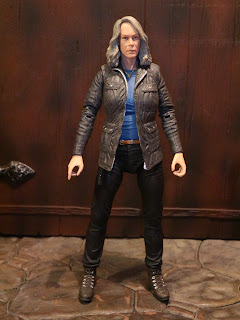 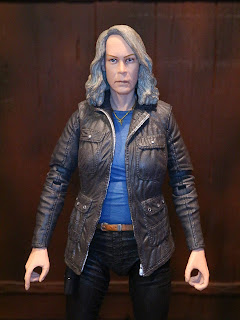 * Laurie looks fantastic. She's definitely unusual from most horror figures in that she's not a monster or an insane killer, but simply a regular person. Laurie's a grandmother in Halloween 2018; how many action figures do you have on your shelf of characters that are legitimately grandmothers? I honestly checked and couldn't find anyone. Shmi Skywalker and Padme Amidala have grandchildren, but they both never lived to see their grandkids and the figures they're based on are from their younger years. Queen Marlena, maybe? You could maybe count Ripley, although, again, she was in cryosleep, so it's a stretch.  Laurie dresses casually but also ready for action. The jacket has lots of pockets, she's got a belt with a knife sheathe attached, and some all-purpose boots. The paint work and sculpt are excellent and, as always, NECA made sure to give every material its own, unique sculpt. 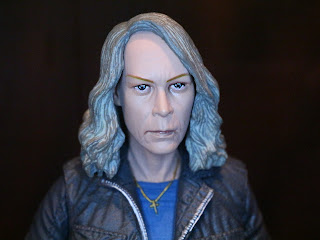 * NECA did a pretty good job of capturing Jamie Lee Curtis' likeness here. Honestly, it looks just like her and I have a feeling that anyone familiar with the actress could instantly recognize the portrait. The eyes are really well done, here. I'm really curious if a really good painter could even take this headsculpt and turn it into a young Laurie Strode from the original film, too. It seems doable. 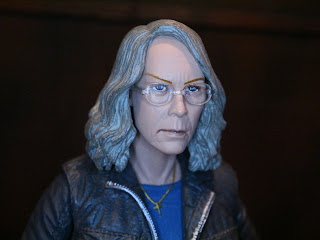 * Laurie's second portrait looks quite similar to the first. The eyes are different, though, and she's wearing glasses. The glasses are actually removable as they're simply held on by sliding between her head and the hair (be very careful removing them). The heads are only subtly different, so you may just want to keep the glasses on, though. 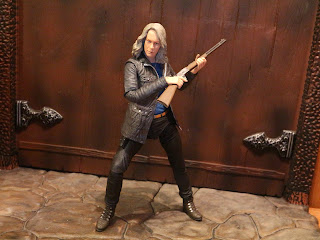 * The articulation is quite good and on-par with nearly any of NECA's other human figures. NECA's articulation may not be designed for lots of silly posing and ninja moves but it always does a great job at allowing you to tweak your figures just right to give them subtle, lifelike poses for display on your shelf. She holds all of her weapons really well and convincingly. So much of the articulation is well hidden, too, leaving the sculpt to look impressive and fairly unbroken. 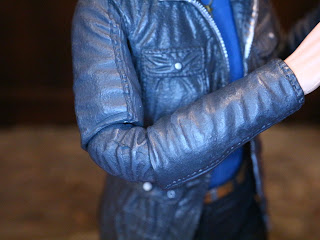 * I really like these double jointed elbows Laurie has, as they make it much easier for her to hold her weapons appropriately. The elbow piece actually is a swivel/hinge joint on both end, so she still has the benefit of a forearm swivel and a bicep swivel without the need for those additional joints to breakup the sculpt. 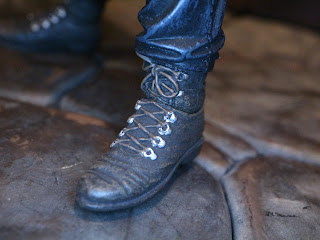 * Laurie's boots look great. I love the weathering on them and the intricate paintjob on the laces and the eyelets. 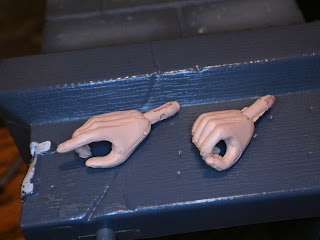 * Laurie only comes with two alternate hands, but they swap pretty easily and allow for her to have either a pistol gripping right hand for her firearms or a tighter grip for her knife. 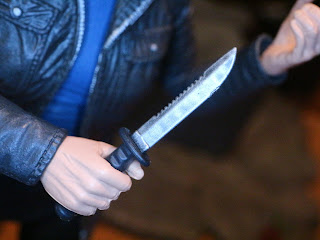 * Laurie's knife has a serrated edge and some nice paint work to make it look quite realistic. She holds it very well, too, thanks to the additional gripping hand. 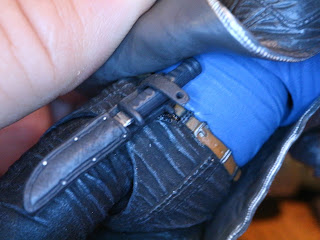 * Hey look! My thumb! Seriously, I could find a way to show off the sheathe Laurie has tucker under her jacket than to lift it up like this. The sheathe looks great and it very functional, although the strap across the handle is a paint to get attached. Just leave it alone. 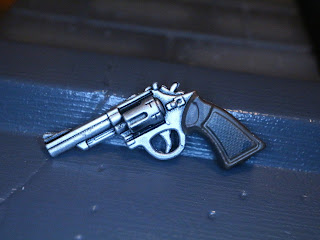 * Laurie is packing some heat and her primary sidearm is a Smith & Wesson Model 66 revolver. It's a .357 magnum pistol with a wood grip and a 4 inch barrel. The sculpt is excellent and NECA used a wash to really bring out the detail. Laurie looks awesome brandishing this! 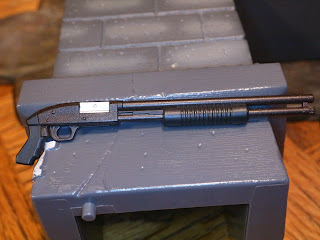 * Next up is her Mossberg 500 Cruiser shotgun with a high capacity magazine tube. This is a really cool shotgun and, so far as I know, this isn't reused from any other NECA figures that I own. It's exactly what she uses in the film and it's probably my favorite weapon to arm the figure with. 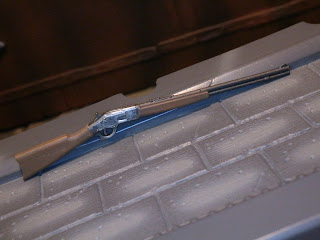 * Last, but not least, is the Winchester Model 1873. This is intended to be an older rifle so NECA has appropriately given it an aged, worn look. It is missing the loop used to chamber another round, however, which is odd. I'm assuming NECA figures it would impair the figure's ability to hold the rifle properly. 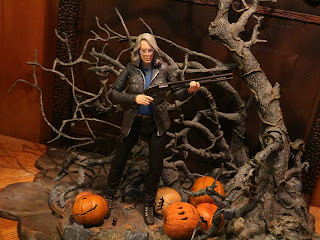 Any complaints and quibbles I have are minor compared with what we got: NECA delivered an action figure of Laurie Strode in full on Michael Myers slaughtering mode! NECA rally delivered here and has definitely given Halloween fans a real treat in finally being able to add a Laurie Strode figure to our shelves. Laurie makes a great companion to NECA's recent Michael Myers and, I'm hoping, is the just the next figure in what becomes a very long and successful line of Halloween releases for NECA. She's an Epic figure of one of the great horror heroes and it's nice to finally be able to add her to the shelf.

This is the first figure of Laurie Strode ever made so far as I'm aware. For more reviews of NECA's Halloween releases, check out the following:
Ultimate Michael Myers
Posted by Barbecue17 at 10/03/2019