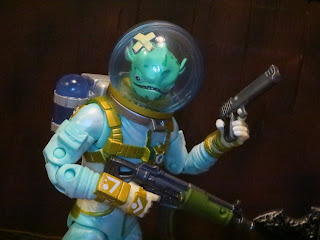 Are you ready for another review from Jazware's excellent Fortnite: Legendary Series? Of course you are! Today I'm checking out the incredibly crazy cool fishman Leviathan. Leviathan appears to be a fish of some sort chilling out in the glass globe helmet of a diving suit. Pretty funky, right? I see all sorts of possible sources of inspiration here including Fearless Fish from Sweet Pickles, Bob the Killer Goldfish from Earthworm Jim, and apparently Minion from Megamind (I also see elements of both Johann Kraus and Abe Sapien, too, though that just might be me). This guy is easily one of the coolest looking figures from Series II of this line and he's been hitting stores for around a month or so. Let's check out Leviathan after the break... 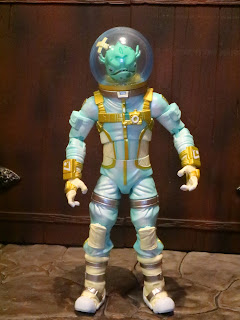 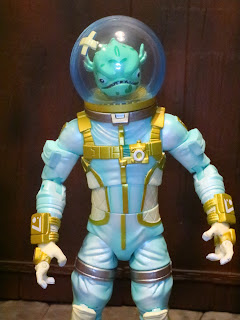 * If the idea of a mean-looking fish in a diving suit gets you pumped up for adventure, then Leviathan is the toy for you! I love this guy. Seriously, diving suits like this (or maybe it's a spacesuit?) just look incredible. Actually, I'm kind of wondering if it is supposed to be a spacesuit because why would a fish wear a diving suit? I guess they would wear the diving suit "backwards" so that the water would be kept inside. Huh. That's a lot to think about. Well, I still think the colors on this are amazing. Whether it's a diving suit or a spacesuit, I would wear it. And I'd look fantastic in it. 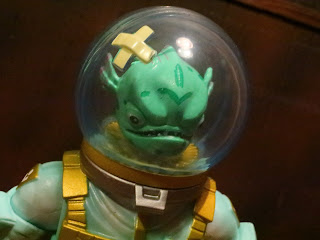 * Leviathan (I'm assuming that's the fish's name) is just chilling out inside of the round glass dome helmet. He's a cool sculpt with lots of nice little paint details. He's also posed on top of a clear peg so it looks like he's floating inside the dome. 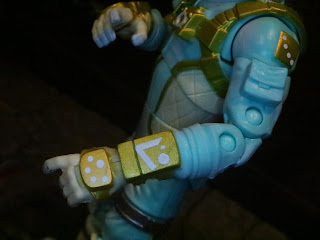 * The arms of the suit are covered with interesting symbols. I don't know what they mean but they look mysterious and invite you to tell your own stories about where the mysterious Leviathan came from. Share your Leviathan origin stories in the comments below! 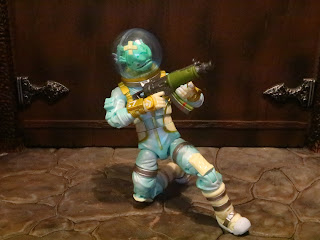 *  The articulation on these guys have all been incredible so far, and Leviathan is no exception. He feels sturdy, durable, and has articulation that feels like it could give Toy Biz's Marvel Legends line a run for its money. The inclusion of things like toe joints, lots of swivel hinges, double hinged elbows and knees, and butterfly pecs allow this guy to take some crazy poses and uses two-handed weapons with ease. 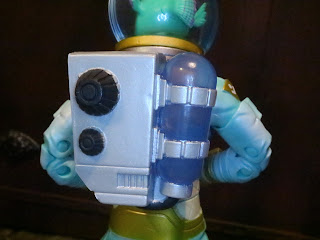 * Leviathan's back bling is called the Fish Tank and it is, literally, a tank for a fish. It looks like a very simplified water tank, thus supplying a steady supply of appropriately oxygenated water to Leviathan. The translucent blue tank on the side of the pack is quite a nice touch. 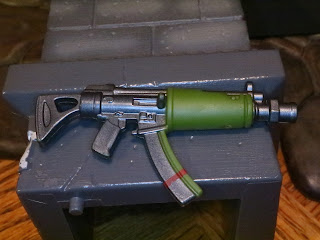 * Leviathan is packing a submachine gun that looks kind of like an H&K MP5. It's a nice sculpt that features lots of detail while still adhering to Fortnite's somewhat animated aesthetic. It also has a couple paint application as well, which really makes it look much nicer than the weapons you see with many other mass market lines. 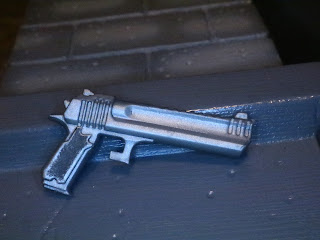 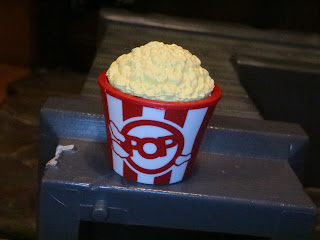 * Why does Leviathan come with a bucket of popcorn? I guess the question that you should be asking is why shouldn't Leviathan come with a bucket of popcorn. There are individually sculpted kernels, red and white lines painted on the bucket, and a slit in the back to help the figure hold the bucket. I like to eat my popcorn with curry powder on it. How do you take your popcorn? 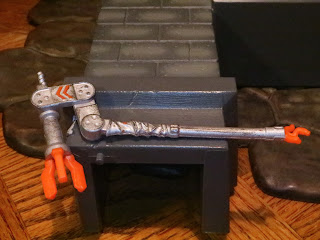 * Leviathan's harvesting tool is called the EVA.  think it's supposed to be a robotic arm of sorts, kind of like the arm on something like one of the Mars Rovers. The sculpt is great (I love the frayed wiring at the base) and you get some paint applications and a bit of weathering on the shaft. 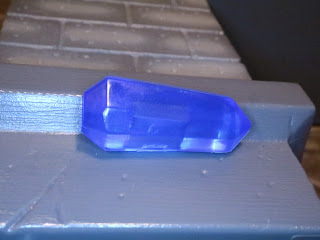 * Leviathan comes with the Hop Rock, which I'm guessing is an in-game item that makes characters jump higher and further. I think it's just a cool accessory as it's a crystal of some sort and it looks like one of the gems from the Zen: Intergalactic Ninja toyline. 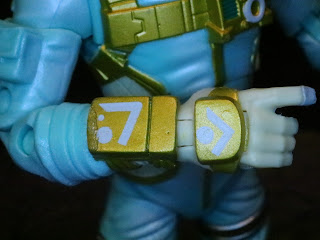 * There's a weird bit of paint damage on the right arm of Leviathan's suit. It's not major, but it's worth pointing out nonetheless. 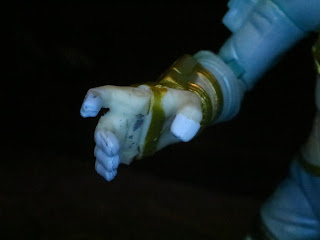 *  My biggest complaint with this line is that Jazwares went with hinged fingers. The fingers move with one hinge and while they're not as problematic as the fingers on older Marvel Legends figures, I still don't like them that well. They have a fairly tight grip, but sometimes they're still tough to use, especially for thinner accessories like the melee weapon or a gun grip.I will say that the series 2 figures seem to have even tighter grips though, so maybe these eventually won't be much of a problem. 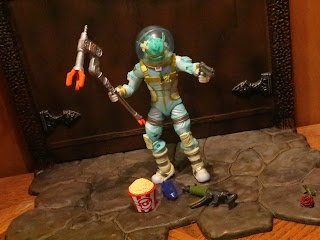 Leviathan is another Epic figure in the Fortnite: Legendary Series line of toys. Jazwares is putting out some incredible toys here. Fun character designs, great sculpts, amazing articulation, and a plethora of accessories with each figure. For $20 bucks, the standard rate for most 6 inch mass market figures, you're getting way more than you would probably get from any other toyline. Leviathan is definitely one of my favorite figures from Series 2 and Jazwares' Fortnite: Legendary Series is absolutely going to earn a spot on my best of 2019 list for sure. It's just too good of a toyline. Seriously, pick these up! Awesome toys like this deserve to be purchased and enjoyed!