Road to Rise of the Skywalker: Second Sister Inquisitor from Star Wars: The Black Series Phase III by Hasbro 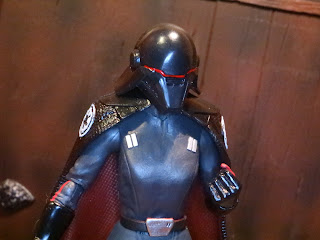 Triple Force Friday 2019 earned it's name because it included product not just from the upcoming Star Wars Episode IX: Rise of the Skywalker but also merchandise from the upcoming Disney+ show the Mandalorian and the video game Jedi: Fallen Order. Today I'm checking out the Second Sister, one of the Inquisitorius from Jedi: Fallen Order. GameStop has an exclusive Carbonized Graphite variant of the character but I passed her up and just went with the standard figure. The Inquisitors first showed up in Rebels but now they're making their way into more areas of the Star Wars Galaxy. The Second Sister is a new character (different from the Seventh Sister from Rebels) who actually appeared in an issue of the Darth Vader comic series last year. Of course, Jedi: Fallen Order is going to be her first real hurrah so let's get a jump on checking out a new evil Star Wars villain after the break... 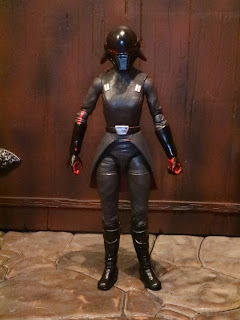 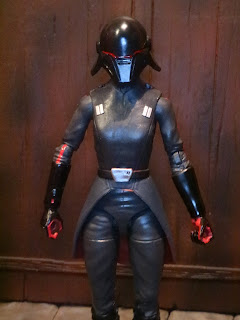 
* The Inquisitorius has a pretty standard dress code that fits right in with the rest of the Empire and the Second Sister is no exception. You've got a grey uniform that looks very much like an Imperial Officer's outfit but augmented with black armored greaves and a Darth Vader-ish helmet. 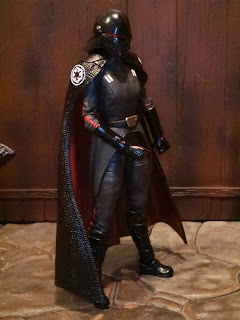 * The Second Sister wears a very cool cape. It's long, black with a red lining, and has a interesting pattern. Of course, it's also sporting the symbol of the Galactic Empire, because Imperials gotta represent. The cape actually plugs into two holes on the figure's shoulders and stays on quite well. She looks very, very cool wearing this. 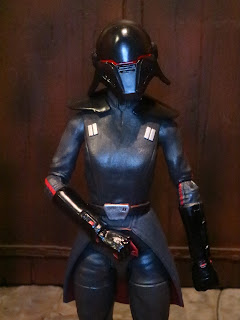 * What to do if you want the Second Sister to be more mobile, however? Can she fight as well when she's encumbered by her stylish cape? It turns out that the Second Sister comes with two separate pauldrons that can plug into the holes where her cape goes. It gives you a couple of options for displaying her, which is always a nice feature. 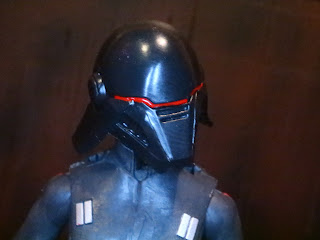 * The helmet is very. It kind of reminds me of a cross between Darth Vader and an Imperial Gunner (who I'm still shocked hasn't made it into the Black Series yet. There's even two different versions!). The helmet has great details and a nice, shiny finish in addition to the creepy red lens across the front. 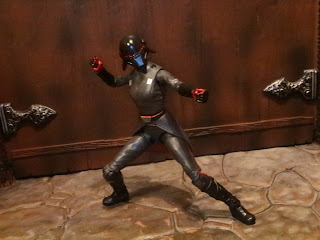 * The articulation on the Second Sister is about what you'd expect from the Black Series, so no complaints here! She has lots of useful swivel/hinge joints and can take some fantastic lightsaber battling poses. 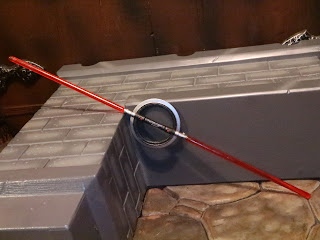 * The Second Sister carries her double bladed, spinning lightsaber, just like the rest of the Inquisitors you're probably most familiar with. It doesn't spin though, but it does have two blades which are removable. 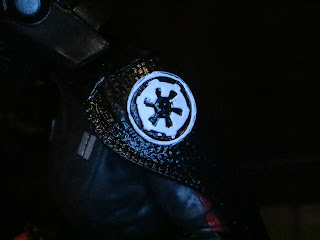 
* The Galactic Imperial symbols on the Second Sister's cape are really kind of rough looking. They're actually uneven, which doesn't seem like something the Empire would let slide. 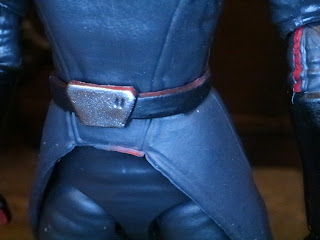 * While red, grey, and black is definitely the Second Sister's chose color scheme, why is there so much red showing on her belt and on the bottom of her blouse? Seems like some sloppy paint apps, which I've noticed more on the Triple Force Friday releases than on any other Black Series figures in recent memory. 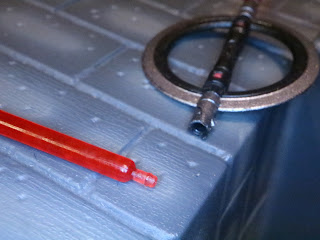 * Yes, the lightsaber blades are technically removable but I wouldn't recommend it. These look really, really fragile. They feel very, very fragile, too, so be careful. I really wish Hasbro would give us solid lightsabers and separately molded hilts, like they've done with some of the Kylo Ren figures. 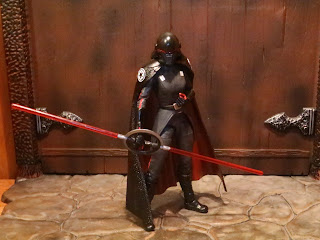 I don't dislike the Second Sister but, as an action figure, she has quite a few flaws. Nothing massive, but the little things like messy paint applications and the weak lightsaber blades really add up. She's still a Good figure, and I doubt fans interested in the game or who simply want more bad guys, will be disappointed, but she could have been a lot better. There are definitely some cool features, particularly her cape, helmet, and the cool way you can swap out the cape and pauldrons. I suspect that the Second Sister wasn't as popular on Triple Force Friday as the Mandalorian, but I'd guess she could be the second most popular basic figure for sure.