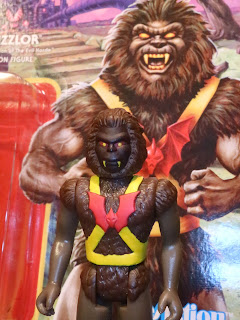 Super7 likes to do plenty of variants with their ReAction figures and today I'm checking out one of the variants from the Masters of the Universe ReAction line: The Dark Variant of Grizzlor! Exclusive to NYCC 2019, the Dark Variant Grizzlor depicts one of the vintage toy variants of Grizzlor where he has much darker limbs and fur and a black face instead of the brown face. It's a fairly well known variant and it's one I'm surprised neither Mattel nor Super7 ever tried to work into the Masters of the Universe Classics line. We get it here, though, so let's take a quick look at Grizzlor after the break... 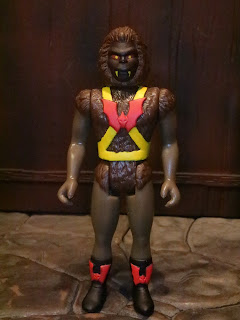 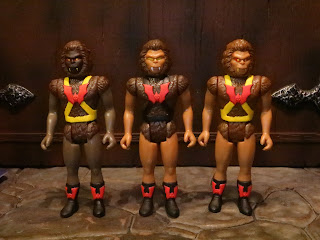 *Dark Variant Grizzlor (on the left) is a simple repaint of the standard ReAction Grizzlor (middle) and the Toy Variant Grizzlor (right) figures that were released earlier this year. For the full scoop on the figure check out those reviews as this review is mainly going to cover the color and paint differences of the figure. This is the same figure as those two, just darker in color. 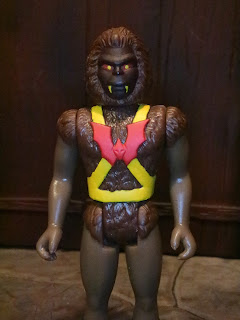 
* Super7 left Grizzlor with the same yellow and red harness as the Toy Variant figure but gave him the darker limbs and fur of the vintage variant this toy i.s based on. He actually looks really cool this way 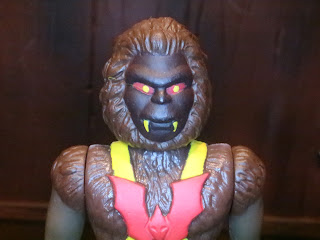 * Up close, you can see Grizzlor has the red and yellow eyes and yellowed fangs of the vintage toy but now his face is a very, very dark brown, giving it an almost black appearance. 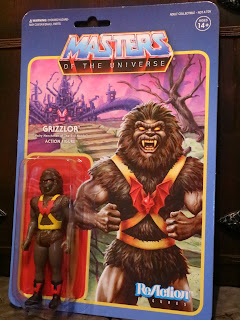 *  The card art on most ReAction figures released by Super7 is beautiful and their Masters of the Universe line is no exception. Grizzlor features an awesome illustration of the character that incorporates the color scheme of this variant. To preserve the card I actually made a slit in the top of the blister so I can slide the figure in and out. It work great and allows the figure to be displayed inside and outside of the card. I've got mine hanging on a metal pegboard similar to what you'd see in a retail store! 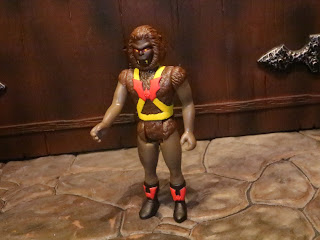 Grizzlor is another Good MOTU ReAction figure for fans of this line. He's still got the scrawny arms of the previous Grizzlor figures in this line and he still doesn't have his crossbow. He is quite nice looking, though, and makes for an interesting variant. Super7 has raised the prices on all of their ReAction figures (even the older ones they still had in stock) so this guy is approaching the $20 dollar mark which seems too high for this type of figure. I'm liking these unusual variants, but Super7 really does need to get rolling on some new characters to get folks excited again.

If you're a Grizzlor groupie then check out the alternate 200X Grizzlor head from the Heads of Eternia pack, the ReAction Grizzlor and Grizzlor (Toy Variant), and the Club Grayskull Grizzlor.