Action Figure Review: Panthor from Masters of the Universe Action Vinyls by The Loyal Subjects 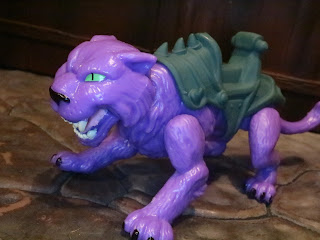 The cats from The Loyal Subjects' Masters of the Universe vinyls came out a few months ago or more but my standard Panthor just arrived in the mail within the last few weeks. I've had the flocked Panthor for a few months now but I've been looking forward to this one as I was disappointed that the flocking on that figure covered the facial features completely. This guy shows off all of the nice sculpted detail, however, and I kind of like him a bit more. Let's check out the standard Panthor vey, very briefly after the break... 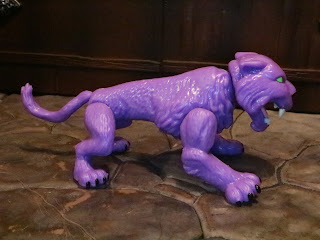 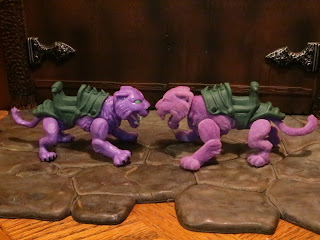 *On the left is the standard Panthor while the flocked Panthor is on the right. Other than the flocking, these guys are exactly the same. For a full run down of this figure, check out that review. This is going to be a short one because there's not that big of a difference between these two toys. 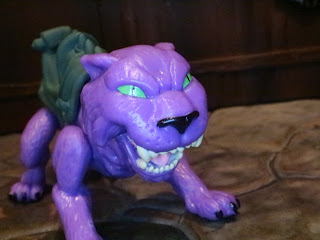 * This figure shows off Panthor's lovely green eyes, his black nose, and a mouth full of sharp teeth! I love it! I can't believe how the flocked versions just covered everything up, so I'm glad to finally have the standard version. He's got the same bio card included along with his saddle. He's as well articulated as the previous figures, too. 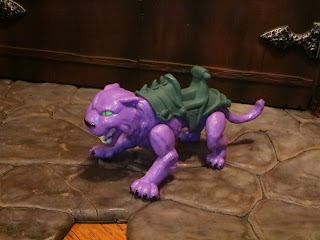 Like Battle Cat (who is the same as Panthor, just with a helmet) Panthor is a Good mini. He still seems a bit too small and too skinny compared to the figures in the line, but I love his look by himself. Panthor's purple and green color scheme just rocks and it's well conveyed here. If you're only grabbing one of each cat in this line, avoid the flocked versions. Yeah, they may be "rarer" but they just don't look as good. This guy is much more desirable as a steed/ pet for Skeletor.


If you're a Panthor fan I've also checked out the M.U.S.C.L.E. version of Panthor and Panthor (flocked) from MOTU Action Vinyls.