The Scream of 31 Days of Toy Terror: Kroenen from Hellboy by Mezco 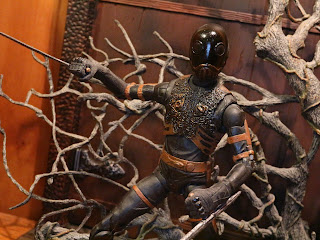 While currently Mezco is mostly known for One:12 Collective and the Living Dead Dolls, there was a point in time where they released an eclectic mix of action figure lines based on their own unique properties as well as film and comic based lines. One of my favorite properties Mezco worked with is Hellboy. They did action figures for both of the Guillermo del Toro films and a decent range of action figures based on the Mike Mignola comics as well. Today's installment of The Scream of 31 Days of Toy Terror features Karl Ruprecht Kroenen, a surgery addicted Nazi with a clockwork heart. Kroenen was one of the most interesting villains in a film filled with interesting looking villains and Mezco put him in the first series and the 1.5 series. I've never been able to get my hands on the 1.5 Kroenen but I did manage to track down a series 1 Kroenen about a decade or so back. He's a really creepy figure, plus he gives you an evil, occult, piece of trash Nazi for Hellboy to fight. Ready for a really creepy and evil installment of The Scream of 31 Days of Toy Terror? Then join me after the break... 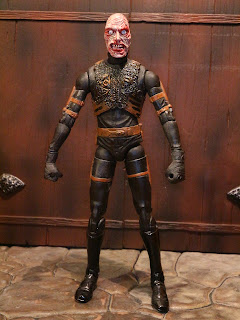 Accessories: 2 tonfas and a mask. 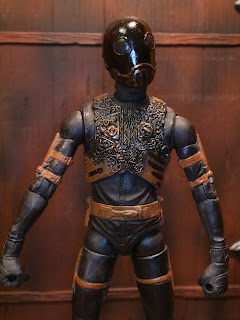 * Kroenen is a creepy looking fellow and his slender, leather clad figure is captured quite well by Mezco. Mezco gave the Hellboy film line a slightly exaggerated appearance which honestly was a nice fit for the film's style. The detail may not be as crisp as on some modern lines but at the time it was pretty solid, especially in some of the areas where there is a lot of detail. 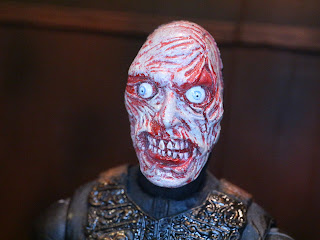 * Kroenen's mask comes off to reveal one of the most gruesome visages I've ever seen on an action figure. I mean, sheesh! This is some scary stuff! Kroenen has a surgery fetish/ addiction, and thus has had many extraneous parts of his body such as his lips and eyelids surgically removed. Actually, I think it's implied that he might have done it himself. This guy is so darn creepy! 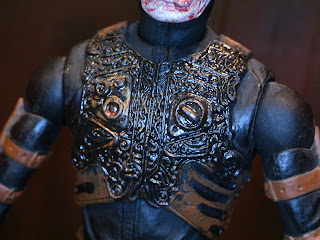 * Kroenen has also given himself a clockwork heart, and thus he has this incredibly detailed chest plate that shows the knob that needs to be wound to start him up. I love the design here! It's very intricate and beautiful despite being on such an evil character. 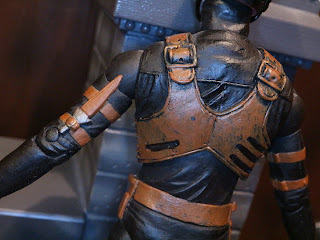 * Kroenen's black suit is covered with various leather straps. Some of them are for holding on the chest plate or are belts, while others hold sheathes with daggers inside. The daggers are not removable, but they look cool. 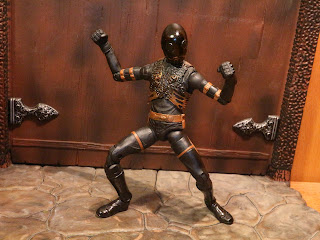 * Kroenen is quite well articulated. He's has double hinged knees, a few swivel/ hinge joints, and a balljointed neck and head. You can get some great poses out of him! There weren't many companies offering this much articulation at the time, so the Hellboy figures really stood out. Kroenen is also quite durable and feels very well made. 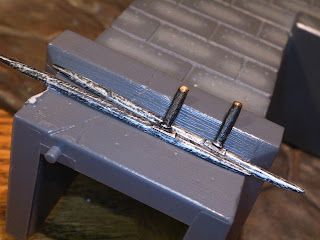 * Kroenen comes wielding two tonfa-like blades. They look legitimately sharp (they actually are kind of sharp) and have some excellent paint applications on them. 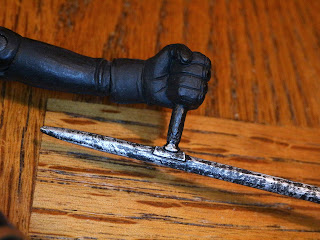 
* The tonfa handles feel kind of brittle, as if they could bend or break when you slide them in Kroenen's hands. His hands are very tight, too, so I really was nervous removing them for a few of the pictures in this review. 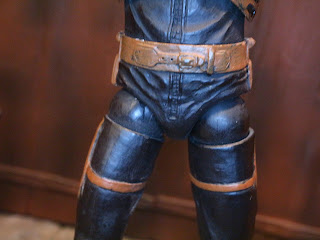 * I really have never liked the look of these swivel/hinge hips, particularly when they have a swivel for the thigh so close to the top of the leg. They just look awkward to me, even on modern figures that attempt to use the same articulation model. 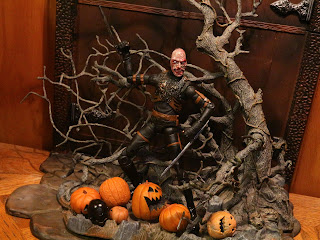 While he wasn't as impressive as some of the other figures in the line, Kroenen is still a pretty cool figure from the first series of figures based on the 2004 Hellboy film. While he has a few minor flaws, overall he's a pretty solid figure with a crazy, gruesome heads sculpt. Kroenen's a Good and a 1/2 figure who can still be found at a fairly reasonable price (the series 1.5 Officer Kroenen is ridiculously expensive, though). While a few companies have made a Hellboy figure here and there, nobody but Mezco has ever done the license justice. Sadly, we'll almost assuredly never get a third film in the del Toro series and we'll probably never get another good Hellboy toyline.


This is the first figure of Karl Ruprecht Kroenen I've reviewed.
Posted by Barbecue17 at 10/11/2019