The Scream of 31 Days of Toy Terror: Ghost Face from ReAction Horror Series by Funko 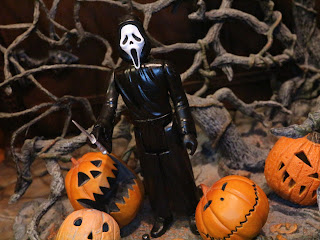 It's been a few years since I last reviewed one of the figures from the ReAction Horror Series by Funko, but the things of the past always tend to make a come-back during the Halloween season, don't they? For today's installment of The Scream of 31 Days of Toy Terror I'm taking a look at one of the top horror icons of the 1990s: Ghost Face! I've never been a big fan of the Scream series, though it is impossible to not recognize the influence of the film on the horror genre. The Ghost Face costume (usually just written as Ghostface), while simple, also has become a staple of Halloween costumes. While the Reaction Horror Series only released one series of figures, they did manage to get to most of the major players. Let's take a look at Funko's attempt at Ghostface after the break... 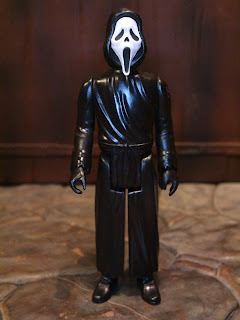 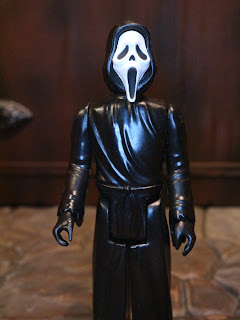 
* Funko captured the look of Ghostface really well: You've got a simple black robe, like a traditional Halloween costume robe, and the mask. While Ghostface is build in the style of a late 70s/ early 80s Kenner action figure, the robe is sculpted with some creases to almost give off the illusion of movement. There's something about Ghostface's design that really works well. Maybe it is because of how generic it is, and I don't mean generic in a bad way. Since so many different people assume the role of Ghostface in the series, Ghostface really and truly could be anyone. 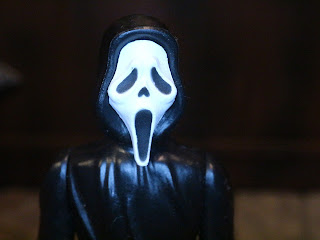 * The mask is what really sells the character, though as it really was just a regular Halloween mask. Produced by Fun World as part of a line called Fantastic Faces, the Ghostface mask is something I distinctly remember seeing at costume stores as a kid. It was a cool design, if a bit generic, but that's what makes it work under the right circumstances. The ReAction figure captures the design well. It's also painted quite neatly, which helps it stand out all the more. 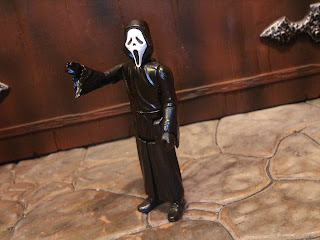 * If you've ever held a figure of this type then you probably know what to expect: Five points of swivel articulation. The figure is durable and made from a harder plastic than many of the other Funko era ReAction figures. He looks right at home next to most other lines in this style. 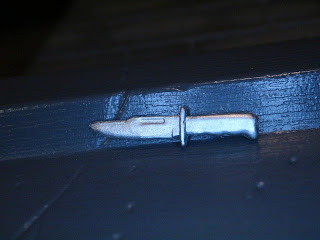 * Ghostface only includes one accessory, but it's a vital one: His hunting knife. It's on the smaller side but it's a great silver color with quite a bit of detail. The figure holds it really well and it absolutely completes his look. 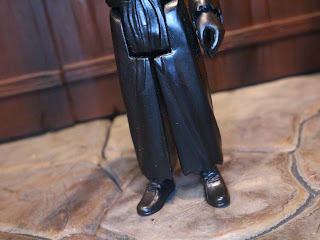 * Ghostface is wearing a robe but, to give him the same articulation as everyone else, he has a giant split down the middle. Some of the Kenner Star Wars figures had this design, but Funko's figure has too much of a gap. It just doesn't look right here. 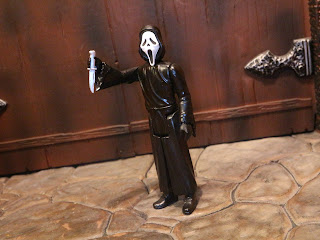 The ReAction Horror Series was a pretty nice line of faux vintage styled figures and Ghost Face is definitely not a bad figure from the series. He definitely hasn't had as many figures over the years as most other characters in the line, so for Scream fans that don't own him already he's probably a worthy item to track down. I'd give him a Good and a 1/2 overall. I wish the ReAction Horror Series had gone on for a bit longer but the ReAction range got lots of different lines from different licenses, but rarely did Funko stick to any line for long. Still, they did release a few nice horror figures to terrorize your other vintage toys.


This is the first figure of Ghostface I've reviewed on the site. For more figures from the ReAction Horror Series check out the following:
Eric Draven from The Crow
Freddy Krueger from A Nightmare on Elm Street
Jason Voorhees from Friday the 13th
Michael Myers from Halloween
Sam from Trick 'r Treat
Posted by Barbecue17 at 10/04/2019