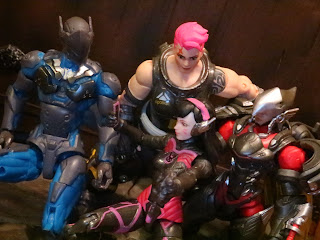 I've been so busy getting reviews ready for The Scream of 31 Days of Toy Terror that it's taken me nearly a month to get my review together for the Overwatch: Ultimates Carbon Series 4-pack, but here it finally is! GameStop had two exclusives for the Overwatch: Ultimates series hit: Lucio (Bitrate) and this boxed set of four figures in their Carbon Fiber and Midnight variant outfits. This is an interesting set as you're getting one figure from series 1 (Pharah), two figures from series 2 (Zarya and Genji), and one new figure that hasn't yet seen a standard release (D.Va). It's a nice mixture but I did have one big disappointment upon opening this set: The three previously released characters are missing some accessories from their prior releases. You're actually getting less stuff with this release than you get with the regular or 2-pack releases of these characters. Genji is missing his alternate gesturing left hand, Zarya is missing her alternate fists, and Pharah is missing her alternate fists and the display stand (though it could be argued that it's Mercy's accessory). It's weird that Hasbro chose to not include the alternate hands here. Still, it's a nice looking set and offers up some great color combinations for the crew. It's also been on sale a couple of times since I picked it up, meaning some folks have gotten it for $40 bucks instead of the standard $80.  Let's check out the set after the break... 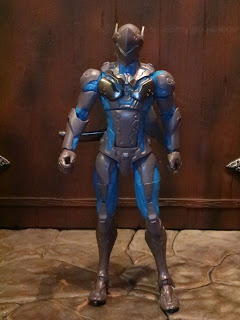 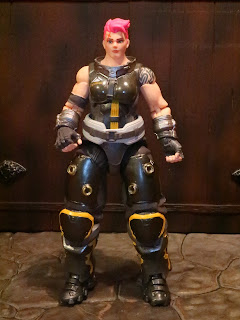 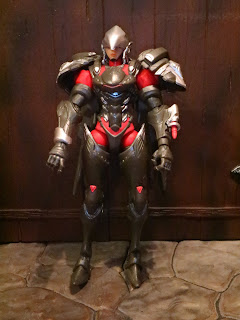 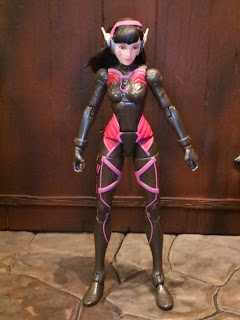 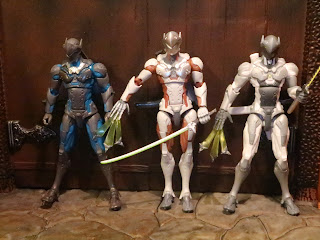 * On the left is the Carbon Fiber Genji from this set while the standard Genji is in the middle and the Chrome Genji is on the right. Other than the missing alternate left hand, Carbon Fiber Genji is essentially the same figure as the previous releases, just with a new paintjob. 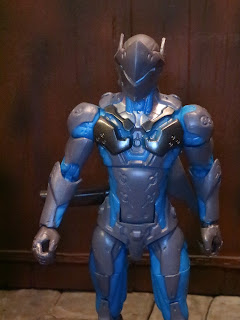 * This is definitely going to be one of those reviews where I refer you back to the previous reviews and just comment on what's new or different here. The Carbon Fiber suit is one of Genji's Epic level outfits and it's nicely rendered here in dark great with blue and gunmetal highlights. I love the darker look here. It's interesting that we've already gotten three Genjis in the line but I really do like the figure, so all is well. He's got the same solid articulation as previous releases, too. Genji is definitely one of the most fun figures to play with in the entire Overwatch line. 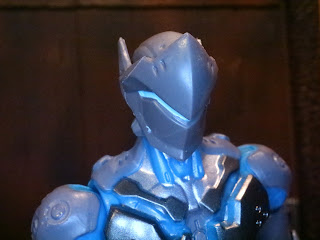 * Genji is wearing a helmet that covers his whole head. It kind of reminds me of Reinhardt's helmet, though I imagine that's unintentional. The visor is light blue here, so while there are no eyes there is at least an eye line. There's also a gray flowing band coming from the back, presumably intended to be the tail of a headband of some sort. 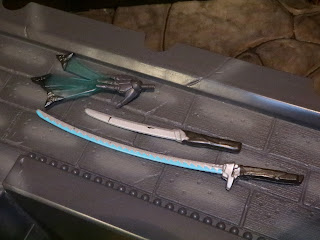 * Other than his missing gesturing left hand, Genji comes with the same accessories as the previous releases: A wakizashi, a katana (now with a blue design in the blade), and his shuriken tossing right hand (also given a translucent blue energy effect). 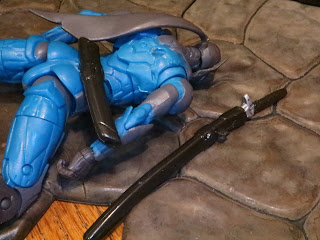 * Genji has two sheathes for his swords but the sheathe for Genji's katana fell off right as I was taking him out of the package. I can fix this with a bit of glue (as it appears like it just wasn't glued in properly) but it's kind of frustrating nonetheless. 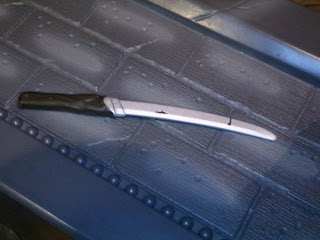 * Genji's wakizashi has some serious flaking paint on both sides of the blade. What gives, Genji? 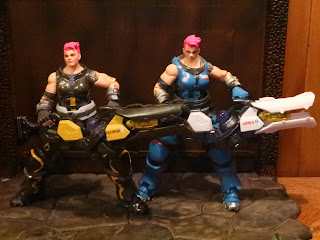 * The standard Zarya is on the right while the new Midnight Zarya from this set is on the left. Again, other than the different paint scheme on her outfit and on her particle cannon and the lack of a set of alternate fists, this is the exact same figure. Zarya's an incredible figure, though, and I was really looking forward to her. 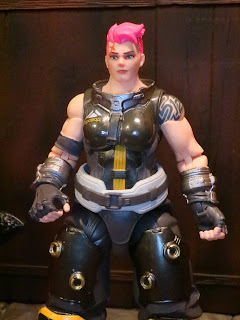 * The Midnight outfit is one of Zarya's Epic level outfits and she looks fantastic. I love the black, charcoal, and yellow color scheme here. It really makes her stand out! Zarya's headsculpt is the same as the previous release (it's one of the best headsculpts in the line) and her articulation is also just as solid, really allowing Zarya to hold her rifle in some excellent two-handed poses. 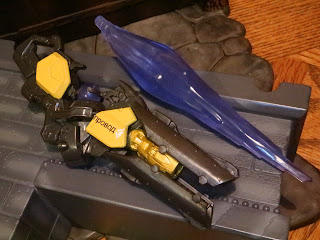 * Zarya's primary weapon, her particle cannon, also has a new paintjob.  It's a huge accessory at around 5 1/4ths inches long, as is the energy beam that also just as long. The energy beam doesn't look noticeably to me, though it still does tend to sag a bit when on display. 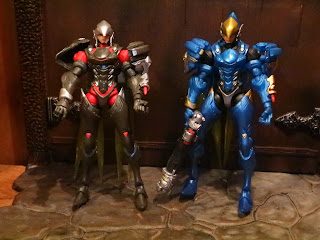 * Carbon Fiber Pharah is on the left while the standard Pharah from the 2-pack (she came with Mercy) is on the right. Again, other than the lack of the alternate fists and the missing stand, this is just a repaint too. Pharah is a cool looking figure with frustrating articulation in her arms, particularly her elbows, and the same goes for Carbon Fiber Pharah, too. 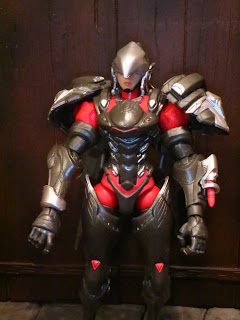 
* Pharah's Carbon Fiber outfit is fairly new (just released in game this year, I believe) so it's cool that Hasbro is keeping things current here. The red and black may not look as impressive as the metallic blue from the standard Pharah, but it's a very different look, so that's rather welcome. 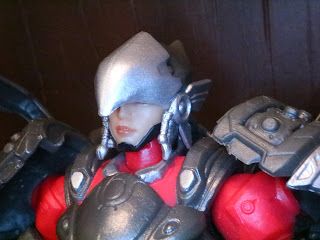 * Pharah still has the same headsculpt, which is just fine, although I would have loved if we'd gotten an alternate removable helmet or unhelmeted head. You can see Pharah's eyes if you look under the visor, though. 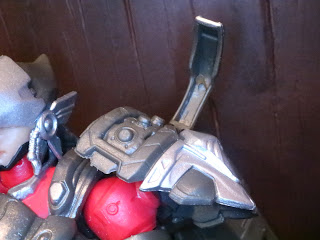 * Pharah's outfit has the same cool shoulder and wrist mounted missile launchers as the previous release. 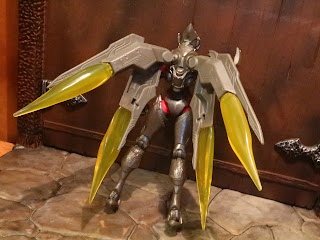 * And the same goes for her jetpack and thrusters. All that's included again, too. The jetpack is grey this time but the jet bursts look to be the same. 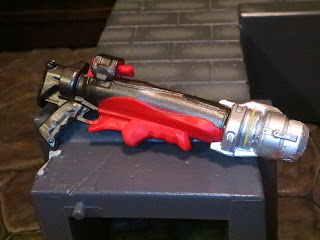 * Pharah's rocket launcher gets a new color scheme, too. It looks excellent! Too bad she still can't hold it better. 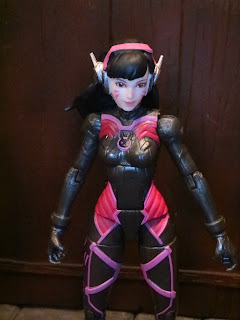 * D.Va is in her Midnight outfit which is another outfit that's new to the game this year. D.Va is a brand new sculpt, which probably means we'll see her down the road. She's a Tank character in the game and usually travels with her mech, Tokki, so maybe we'll see her as an oversized boxed set like Reinhardt. Her outfit is covered with a ribbed texture that makes me think it's supposed to be vinyl or something and it's covered with graphics and various pink and magenta lines that break up the black nicely. 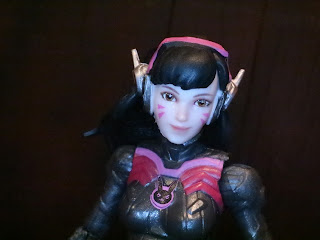 * D.Va has a very cute portrait and, in this variant, her hair is black instead of its usual brown color. She's wearing large headphones which are probably used in communicating with her mech, but I guess she could be listening to some K.Pop as well. 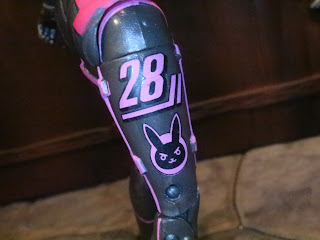 * D.Va has lots of graphics on her jumpsit including her rabbit logo on her chest and on the side of her thigh. Her left thigh has the word "MEKA" on it, which is the acronym for South Korea's "Mobile Exo-Force of the Korean Army." The paintwork is neat and clean on all of these, too. 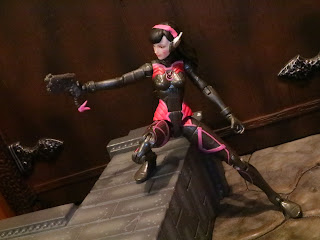 * D.Va might be smaller than most of the other figures but she's articulated as well as most of them. Her legs have an incredible range of motion, as do her arms. She's very fun to put in cool action poses for sure. 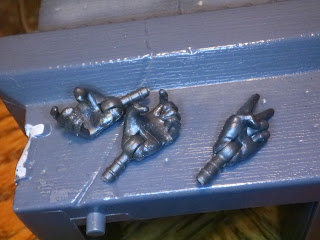 * D.Va comes with four interchangeable hands Three of them are pretty standard, as you get two pistol grips and a peace sign gesture for the left hand. The fourth hand is a bit more unusual... 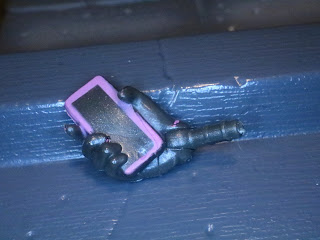 * It has a cellphone attached so D.Va can livestream her adventures and take lots of mid-battle selfies. Cheese! 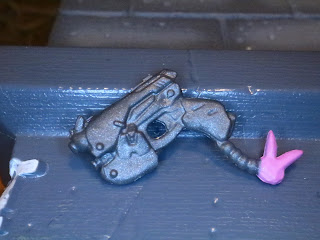 * Last up is D.Va's light gun. It's a cool sculpt that fits well in her hand and has a little rabbit keychain attachment at the bottom of the pistol grip. 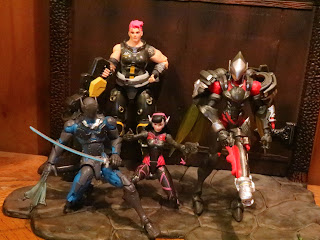 While you're getting fewer alternate hands with this set, you're not paying anymore than you would for standard figures (and depending on sale and such, you might be paying a bit less). Yeah, the missing accessories are frustrating, but the alternate color schemes all look good and getting D.Va early (I'm assuming there will be a standard release) is a real plus. While this set is more for Overwatch fans and hardcore collectors of the line, it still is a Great set and you're getting four very fun action figures. Hopefully this line continues as there are so many characters yet to be made. BlizzCon 2019 is coming up November 1st-3rd so hopefully we'll hear more about future releases there. It'd be great to get one more series before the end of the year. I'd love to see Mei, Ashe, Winston, Widowmaker, Torbjorn, a standard Reaper, Moira, Baptiste, and Brigitte as soon as possible!


If you're interested in more of Genji, check out my review of Genji (Chrome) and the Genji and Hanzo 2-pack.

If you're looking for more of Pharah, I've also reviewed the Mercy and Pharah 2-pack.

If you're a Zarya fan, check out my review of the standard Zarya.