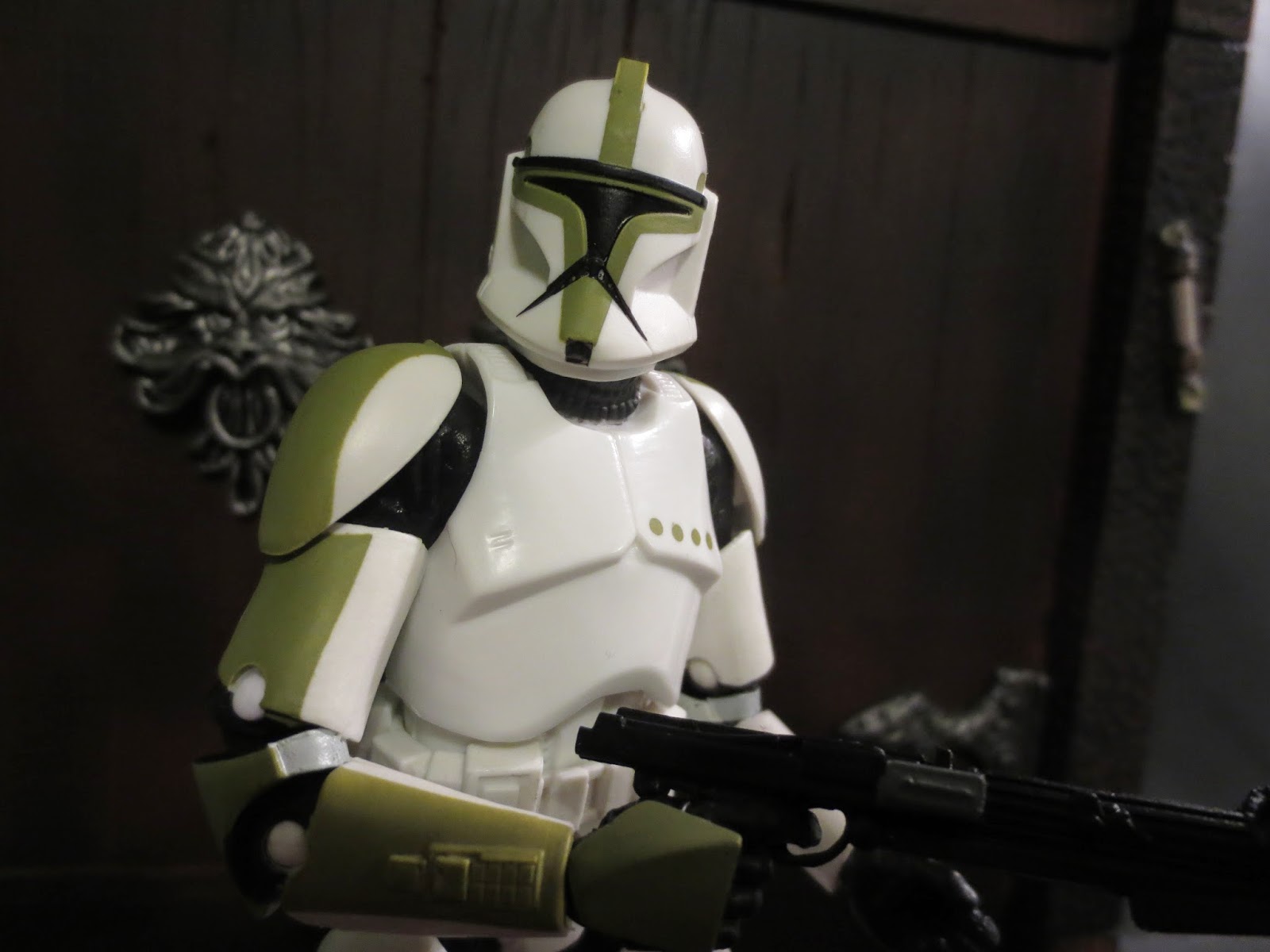 When Hasbro's Star Wars: The Black Series is good, it's really good. So far all of the trooper based figures have been just incredible, so it's a shame that earlier this year I neglected to review the Clone Trooper from the fourth series of Phase I figures. While I didn't review that release of the figure, today I'm looking at the Clone Trooper Sergeant, figure #07 in Phase II of The Black Series 6 inch line, and guess what? This is essentially a repaint of the standard Clone Trooper! I really like the Clone Troopers (particularly after watching The Clone Wars) and the Sergeants have some of the best looking standard armor around. Ready for a look at this guy? Then I'll cut the chatter and get right to it... 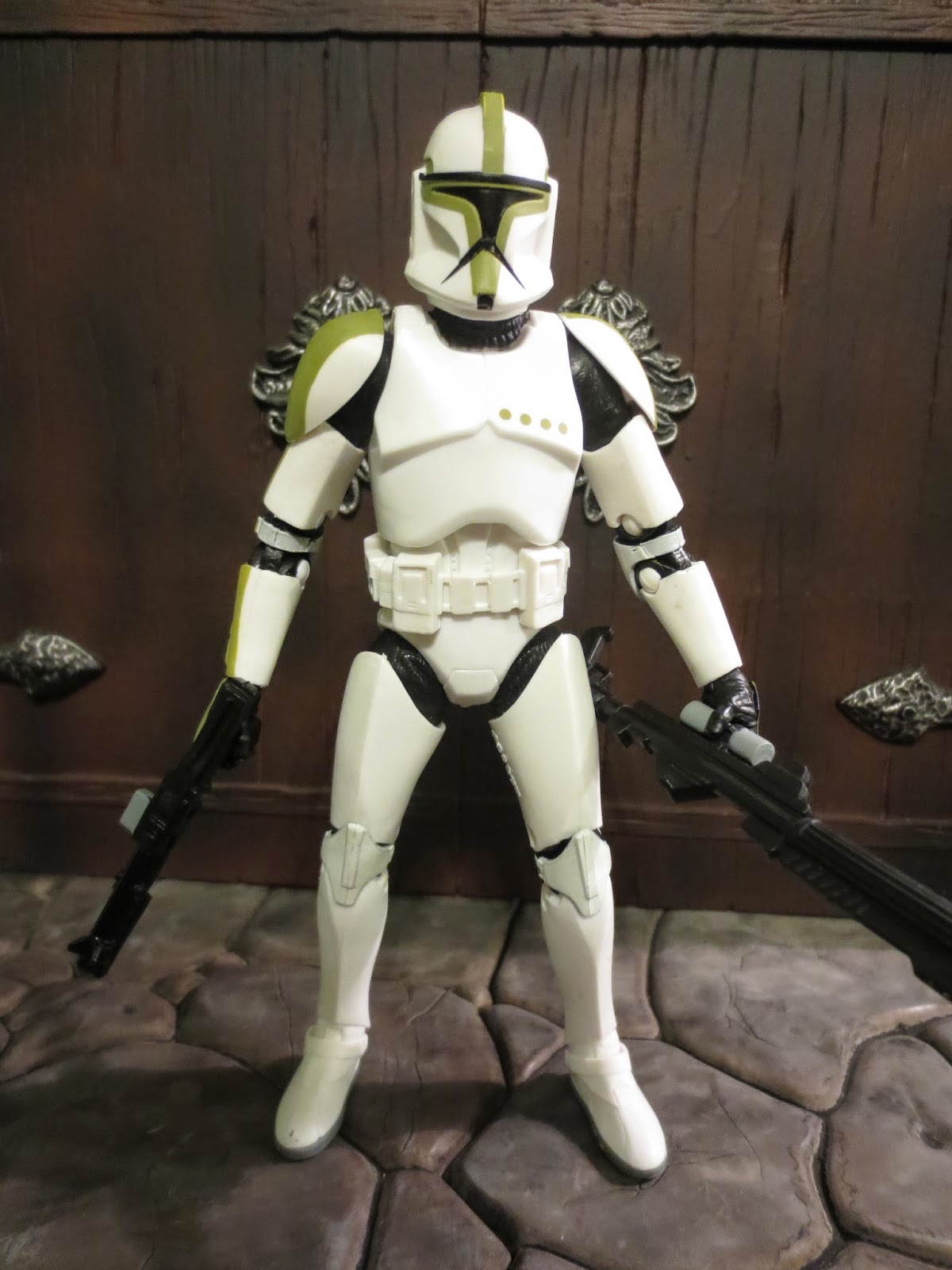 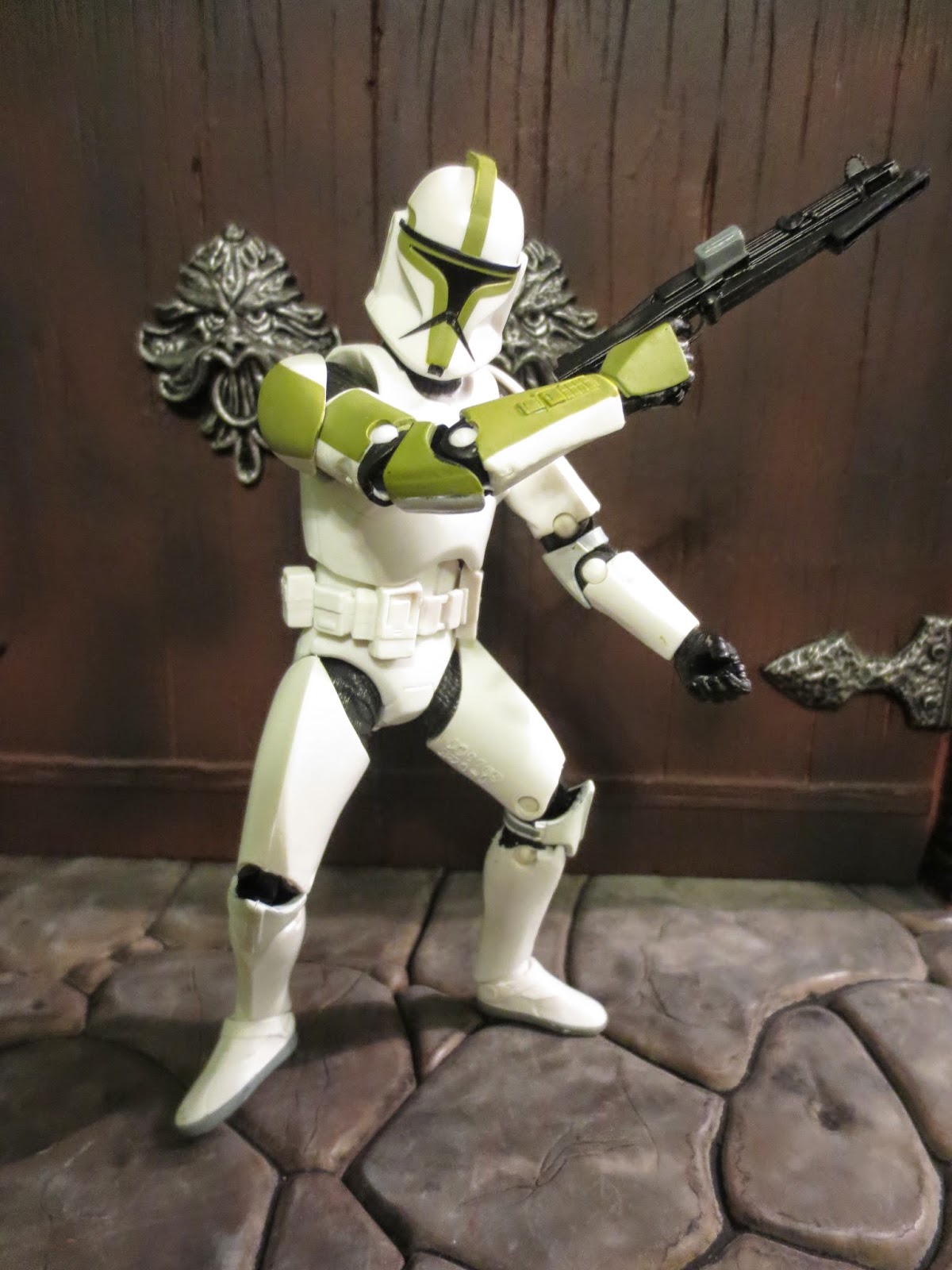 * I'm not sure a better articulated, more solidly constructed action figure has been released this year. While the Stormtrooper was excellent the Clone Trooper Sergeant is exceptional. The joints are not as rubbery on this guy as they are on the Stormtrooper, Sandtrooper, or basic Clone Trooper but he still feels solid and well built. This is one of those action figures that you can sit around posing and reposing without any fear of breakage. These guys are truly some of the best toys out on the market right now, plain and simple. The articulation really lets you give this guy plenty of expression in his poses. 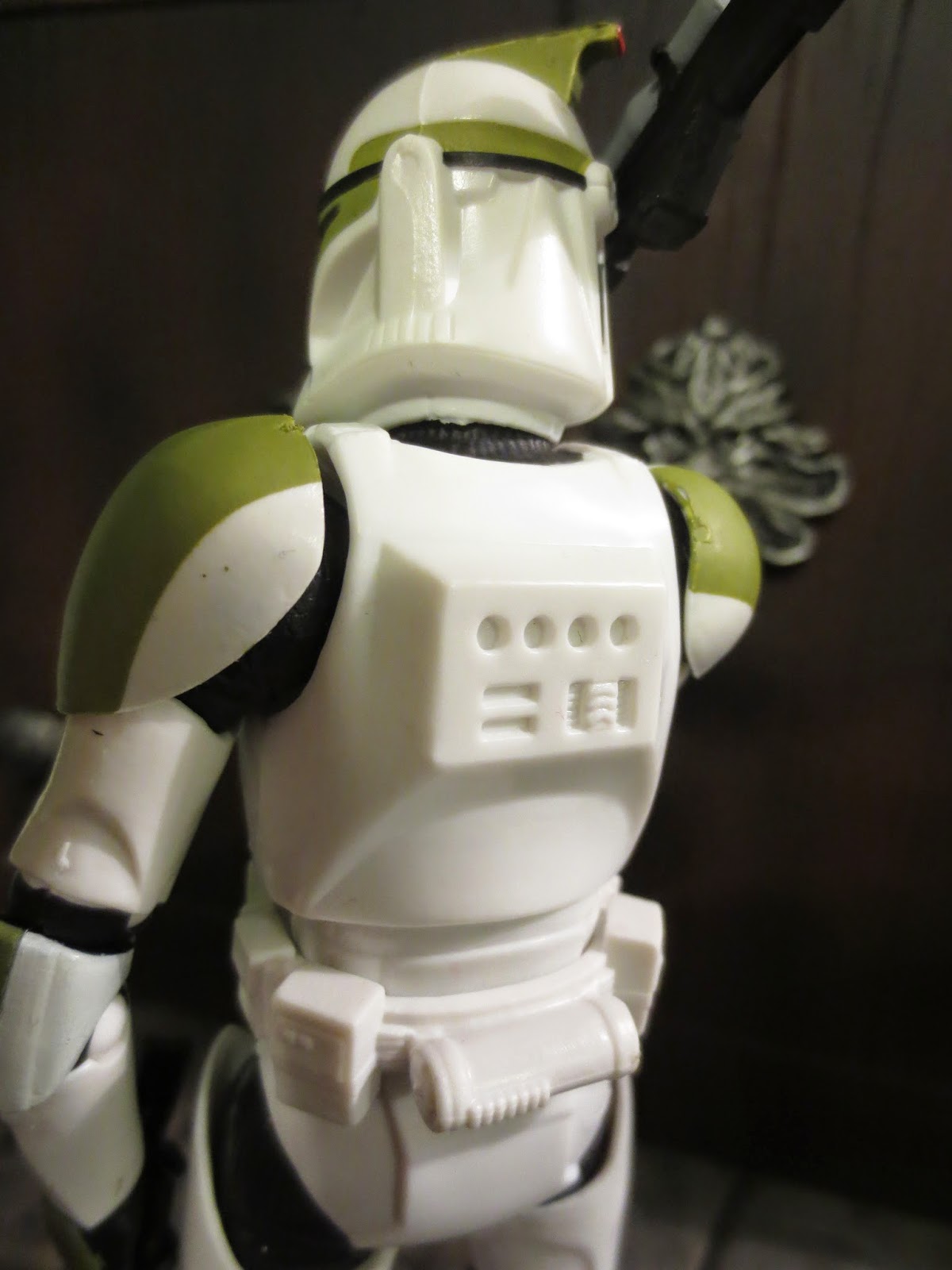 *The paint work is incredibly neat and clean, complementing the detailed sculpt. The green markings on the helmet, arms, and torso really enhance the look of the figure. He's just so darn cool looking! The helmet is pure win. 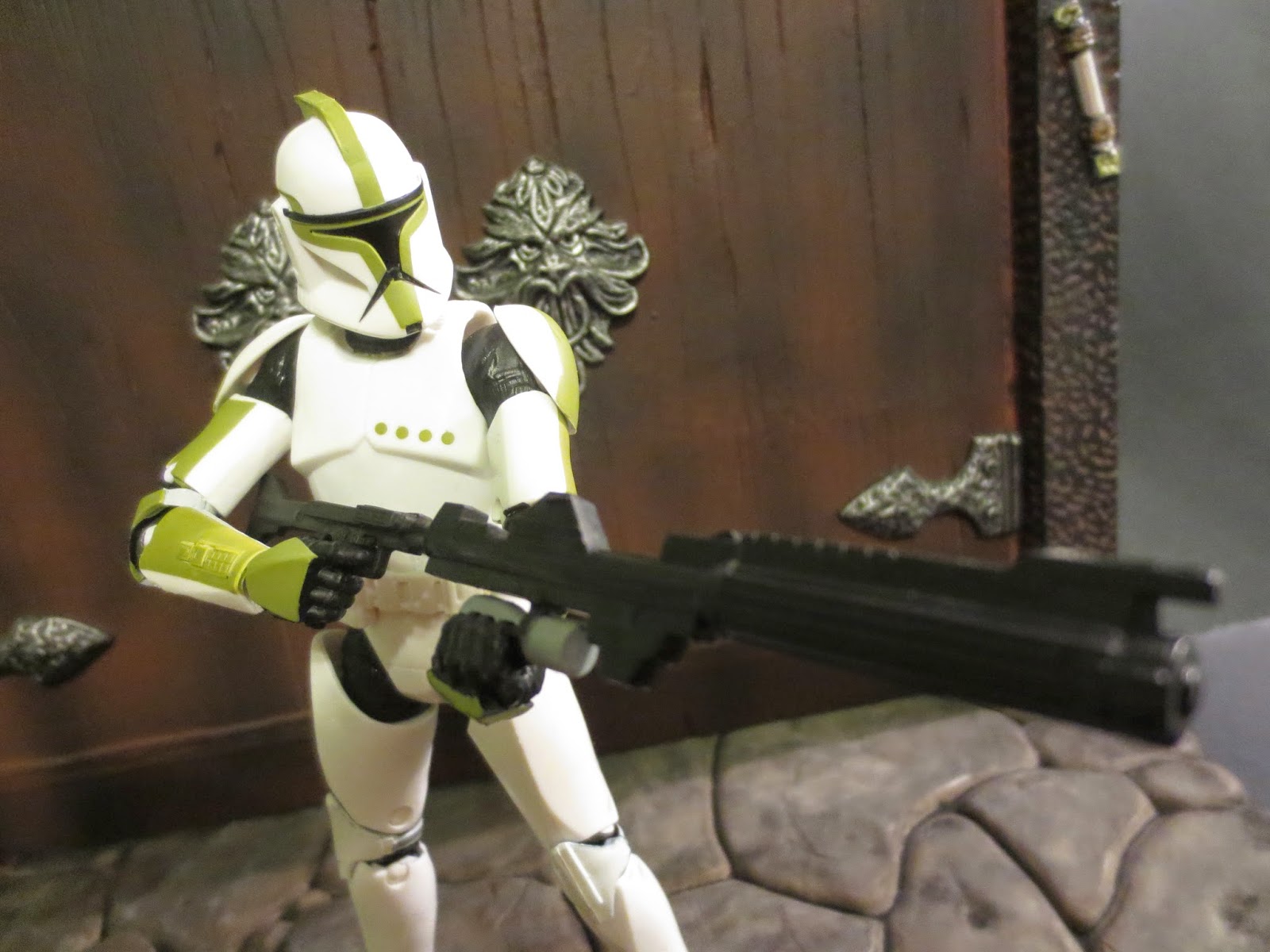 *Like any good clone trooper, the sergeant comes with his DC-15A blaster (the longer rifle) and his DC-15S blaster (the shorter carbine). Not only do these feel like they're molded from a better quality plastic than many other weapons in the line but they also have some paint apps on them. The 15S has a paint app on the side mounted power magazine while the 15A has a paint app on the sniper scope. It's amazing how such a little detail radically improves the look of this figure. 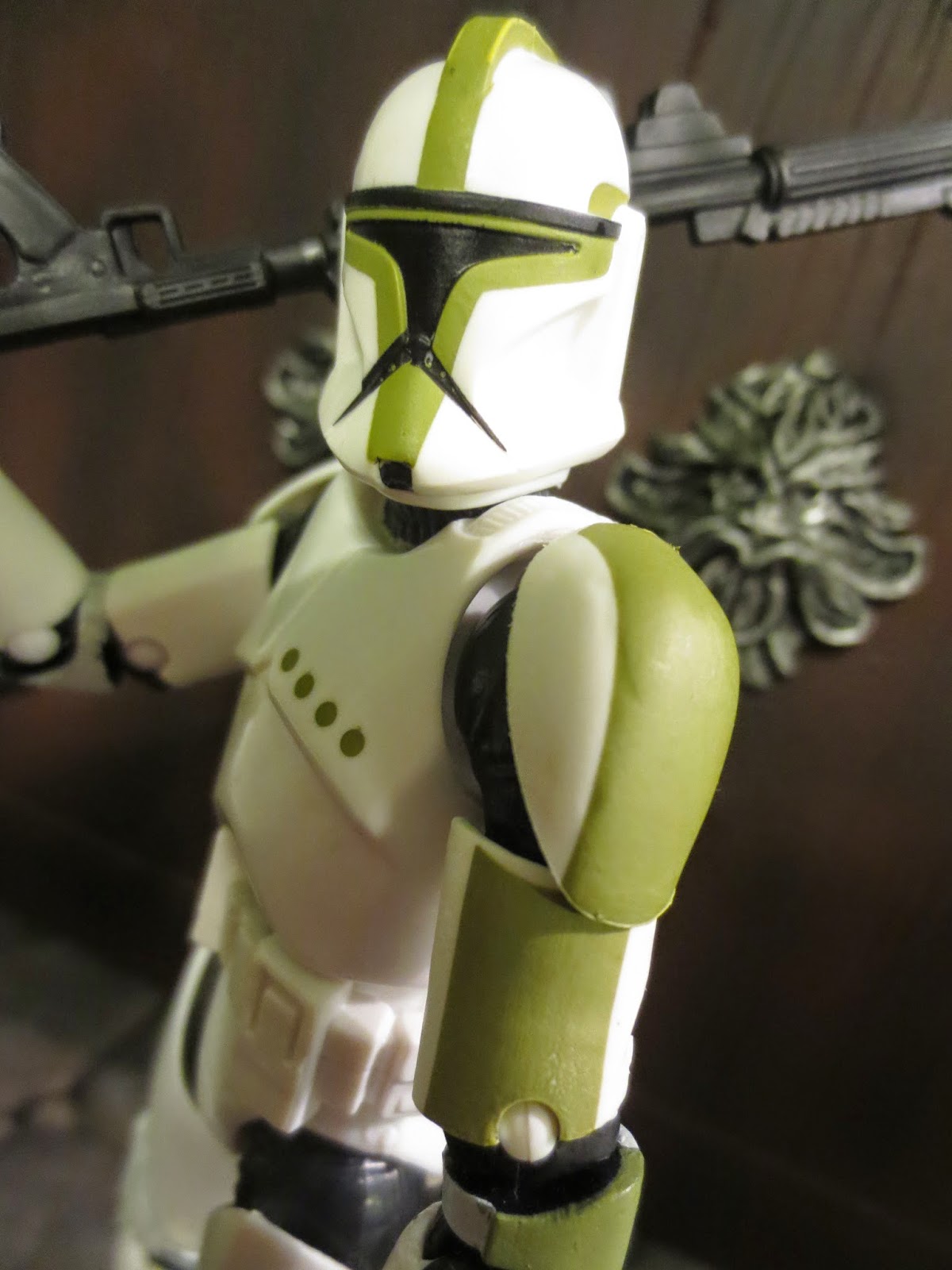 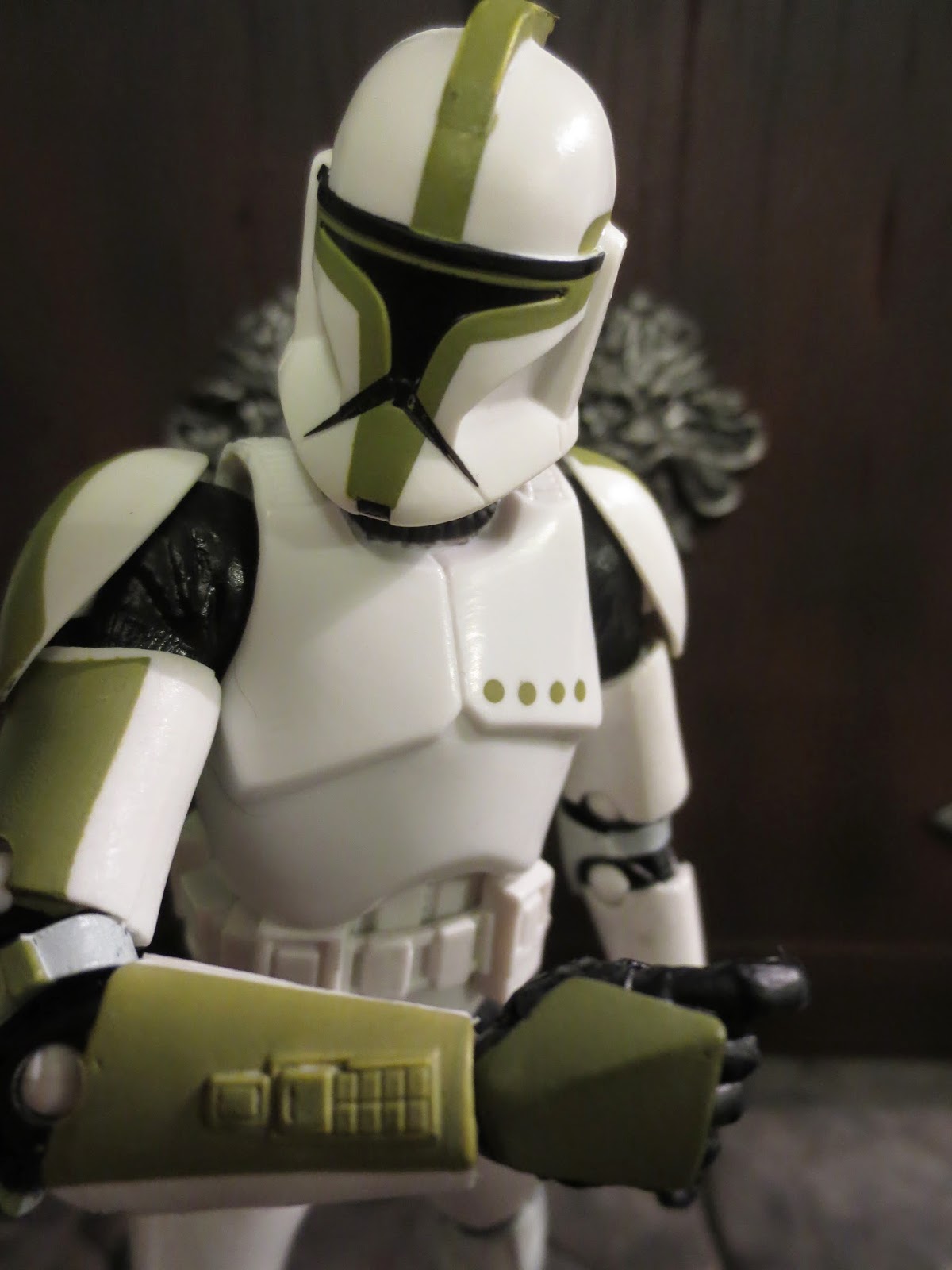 Other than the shoulder problem (which I'd rank as a 2 or a 3 on a scale of 1-10 with 10 being the most problematic), this guy is just awesome. He right up there with the Stormtrooper and Biker Scout with Speederbike representing what Hasbro is capable of with the Star Wars Black line. Judging everything about this figure, I can easily confirm him as Epic. His improved plastic and paint work set him above the already excellent Clone Trooper, which is a true compliment for ol' Sarge here.
Commanding squads of nine standard Clone Troopers, the Sergeant is just who you need to whip your standard Clone Troopers into shape. Of course, with Hasbro's distribution problems it seems highly unlikely that you'll ever see 9 Clone Troopers in your life. Don't let that stop you from getting this guy, though. Just keep an eye open and you should track him down eventually.


I've reviewed plenty of other Star Wars: The Black Series figures, including: