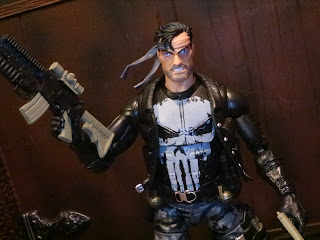 It's no insult to Hasbro's Marvel Legends, as they've continued to be excellent this year, but I haven't purchased one since Captain Marvel back in February. I was checking out GameStop a few weeks ago and I stumbled upon the new Fan Channel exclusive of the Punisher, which I just had to pick up. What can I say? I have a weakness for Punisher figures. They usually look really cool and feature lots of great accessories. This version also reminds me of a cross between the Punisher, Solid Snake, and Snake Plissken. That was enough to sell me on it right there. The Fan Channel exclusives tend to show up directly at sites targeting fans like BBTS, Entertainment Earth, and Hasbro Pulse or in retail at places like GameStop. They don't have build-a-figure parts with them as they're sold as individual releases rather as in series. Let's check out this new version of Frank Castle after the break... 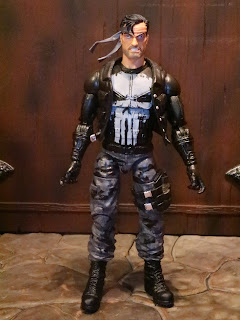 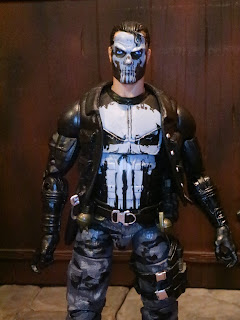 
* I really am liking the look of this figure as it takes Frank's classic look (black outfit, white skull on the shirt) and mixes it with some more modern tactical elements such as body armor, a short lather jacket, and combat pants. The skull looks awesome as it's very uneven and has a "homemade" quality to it. Again, it seems like something that Snake Plissken might wear as well, which makes me like it all the more. 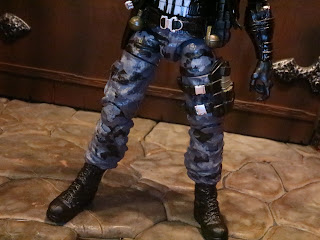 * I believe these tactical pants are reused from the Erik Killmonger figure, but they work just as well for Frank. I love the darker urban camouflage scheme on these. 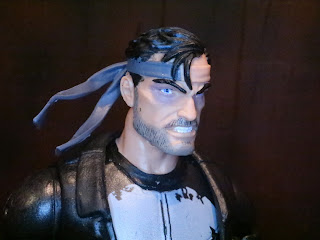 * Frank comes with two portraits, the first of which is reused from the Walgreens exclusive classic Punisher from 2016. Here's Frank's got a lot more stubble, some blue highlights in his hair, and a grayish headband on. Seriously, can't you see this as a Metal Gear Solid era Solid Snake, too? I can! * The second portrait has rank with slicked back hair and facepaint. It's a pretty cool looks that reminds me of the Nemesis series Punisher from 2007. Sheesh, I remember grabbing that figure at a Wal-Mart while heading out on vacation with my wife. Has it really been that long? 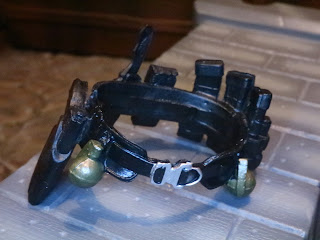 * The belt is removable and it's pretty cool. It's got some grenades, extra magazines, a knife and a pistol on it. 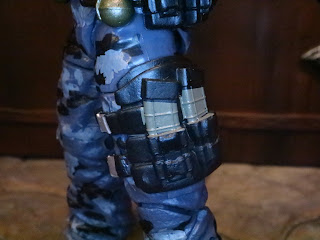 * Frank's also toting a few extra magazines for his rifle in a pouch on his back. The pouch is a separate piece that rests on his thigh though I imagine it would be fairly tough to remove as it doesn't really want to fit over his boot. 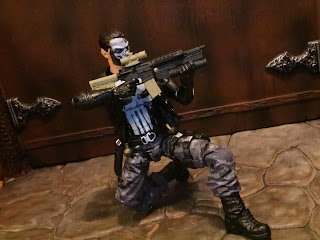 * The articulation is excellent! This Punisher figure has all of the joints and the range of motion you would expect from a modern Marvel Legends figure, meaning he stands well, can take kneeling poses, and can hold his weapons two-handed. He's a fantastic figure. 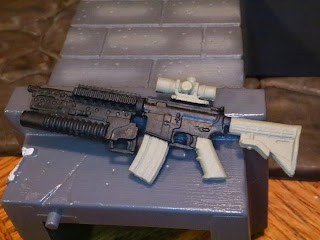 * When you're dealing with the Punisher, you know he's going to come armed. First up is a military styled tactical rifle with an under-slung grenade launcher. The sculpt is nicely detailed and the magazine, stock, and scope have tan highlights. 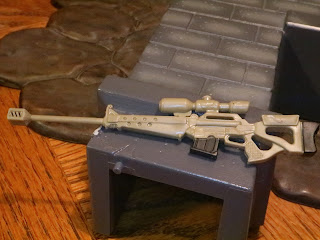 * For long distance problems, Frank comes toting a sniper rifle, too. It's got the opposite color scheme going on with a tan body and black highlights on the recoil pad an the magazine. This rifle sculpt has been around for quite a while as I remember it coming with the Epic Heroes series Mystique and Punisher. 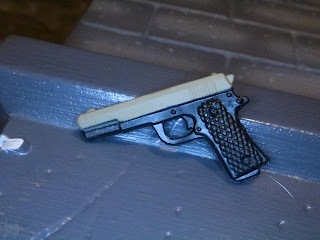 * Last, Frank includes a 45 caliber pistol. It also has a black body and a tan slide on top. 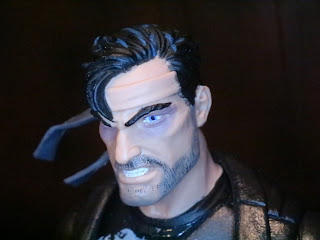 * Unfortunately, my Punisher has a few paint problems. The first is that his headband wearing head is actually missing the paint on the front left part of his headband. Huh? What an odd paint application to miss! 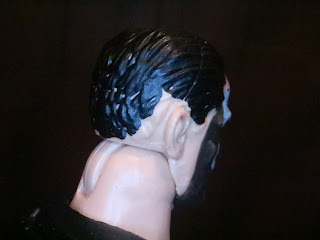 * The second is on the back of the skull face as Frank is missing a large patch of hair and some smaller patches on the right side. Ick. 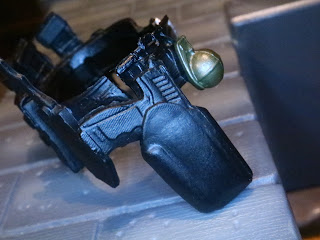 * Last up is one of those things that drives me crazy: Frank has a holster that doesn't function! Yes, there's a Glock pistol in this holster but it doesn't come out. Arrggh! Folks, there's no reason for non-functioning holsters these days. Bad Hasbro! Bad! Bad! 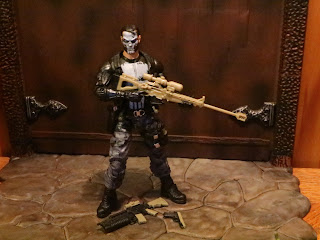 Even with the problems (the unpainted headband and the non-functioning holster), this version of the Punisher is a pretty cool toy. Maybe he's not as amazing as he should be, but he's still a Great figure. Heck, one I fix the paint on the headband he'll be pretty solid. Hasbro is really delivering with the Marvel Legends Fan Channel exclusives and, since they don't come as part of a series, folks can skip any they're not interested in without being short a build-a-figure piece. Shop around for this guy as he's one of the cooler Punisher figures in recent memory.

If you need more Punisher reviews, I've also looked at the standard One:12 Collective Punisher, the Punisher: Fully Loaded, and the Marvel Legends Series Walgreen's exclusive The Punisher.