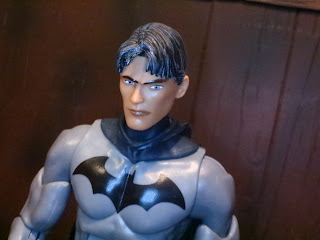 Today I'm checking out the fourth figure in Mattel's last full series of DC Comics Multiverse figures and it's....Batman! C'mon, you knew they weren't going to let a Batman themed series go by without a Batman figure, right? It turns out that there's a catch here, though: This isn't Bruce Wayne! It's actually Dick Grayson from his time wearing the cowl in the Batman: Reborn even that took place after Final Crisis.  As far as I'm aware, this is the first time we've actually gotten a Dick Grayson Batman (I thought this was a Dick Grayson Batman, but I was wrong). That makes this a pretty desirable figure then but, unfortunately, this guy has some issues. I'm usually pretty kind in my reviews, but that's because most of the time I buy stuff I tend to like and that most of the stuff I collect is pretty solid. Unfortunately, this is going to be one of those times that I'm going to be pretty critical. Let's check things out after the break... 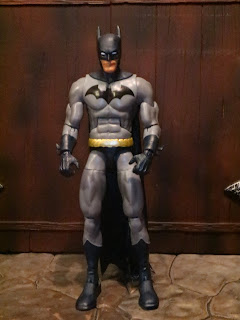 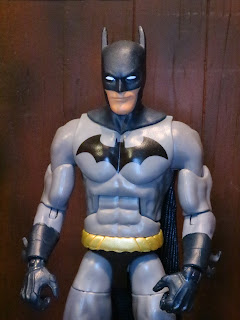 
* Overall I do like the look of this costume. It pretty nicely captures the look of Dick Grayson as Batman from Grant Morrison's Batman & Robin run and has the unique utility belt along with the gray and dark blue color scheme. It may not be as immediately recognizable as some batsuits but when you compare it, it definitely captures a very specific period in the Caped Crusader's history. 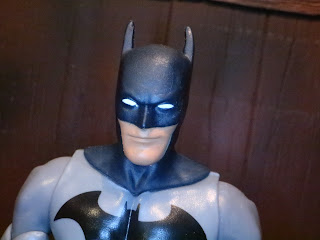 * I like the headsculpt here. Dick Grayson was a very different type of Batman and the thinner face and smirk he's wearing convey that nicely. This is a pretty good portrait. 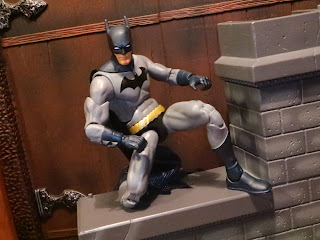 * The articulation is quite good here, too, allowing Batman to take some great poses. Heck, he can even crouch atop a building, keeping watch over the city below. He's a sturdy, well made figure and if he only had better elbow hinges he'd be perfect. 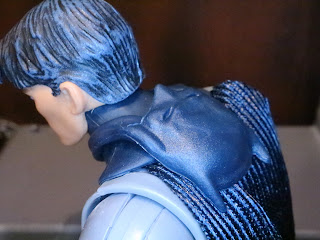 * Dick comes with a separate cowl piece that he can hold or which can fit around his neck in conjunction with the unmasked headsculpt. It's a cool extra that allows for another way to display Dick on your shelf. 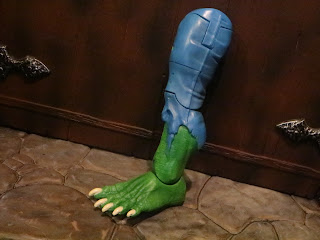 * Dick comes with Killer Croc's left leg as his Collect & Connect piece. I'm really excited to build this guy. As of this writing I now have all of the figures in the series, so I'll be getting to Killer Croc soon. Croc seems like he's going to be a really good figure. It's been a long time since Mattel's last comic based Croc (well over 10 years) so this guy is a welcome addition. 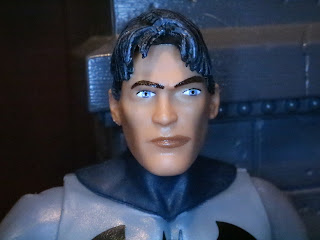 * How cool to finally have an unmasked Dick Grayson and... wait, are his facial features not aligned? Let's be honest: Dicik Grayson is typically thought of as one of the best looking guys in the DC Universe. This isn't that. What happened to him? It's like someone literally rearranged his face. Wow, this is bad, y'all. 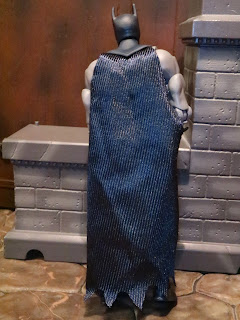 * I like the presence of a soft goods cape but it's way, way too thin. The cape doesn't even cover the back of Batman's shoulders, which is a pretty weird look. Dick's cape as Batman was completely normal, so I have no idea why Mattel went with this. 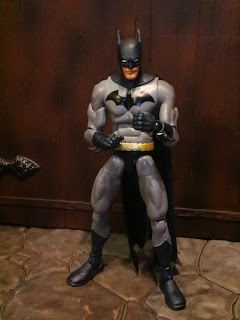 * Dick definitely has a different build than Bruce. He's much slimmer with a sleek, gymnast's frame. This guy looks really scrawny though. Seriously, the joints and proportions on this guy make Batman look really odd. 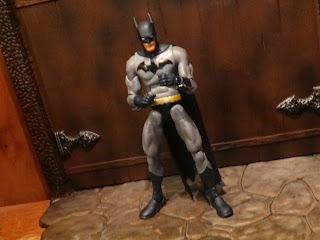 I'm not going to say that Dick Grayson Batman is a terrible figure as he's well made, well articulated, and has a good Collect & Connect piece, but he's definitely the least impressive figure in this series. He should have been a hit, or at least a solid figure, but lots of weird choices like the too narrow cape, the messed up face, and the gangling appearance really make for an Eh and a 1/2 figure. It's a shame because having a Dick Grayson Batman is a pretty nice addition to Mattel's 17 years of DC comics releases but he feels less like a "finally!" and more like a "well, at least we got him."

If you take this as Batman then check out the Dark Knight Gallery where all of my Batman reviews are archived.


If you're looking for more reviews of Dick Grayson/ Nightwing stuff, I've also looked at the Lego Batman: Man-Bat Attack which includes Nightwing, the Kenner Legends of Batman Nightwing, the DC Icons Hush Nightwing, the New 52 Nightwing, the Jada Nano Metalfigs DC103 Nightwing, and Robin from the Teen Titans Go! To the Movies line.