Action Figure Review: Prince Adam from Masters of the Universe by Super7 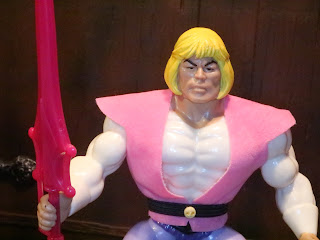 Today I'm looking at another figure from Super7's neo-vintage Masters of the Universe figures and this time it's Prince Adam himself. I love Prince Adam but, sadly, I don't have the vintage figure of the character. My childhood one got sold off at some point when I was in middle school and I've never picked up a replacement. Prince Adam certainly isn't one of the rarest MOTU but it can get fairly pricey to find one in good condition with both his vest and belt. While this more Filmation inspired figure isn't a true replacement for a vintage Prince Adam, it's a nice figure to have as a placeholder for the moment. Let's check out this version of Prince Adam after the break... 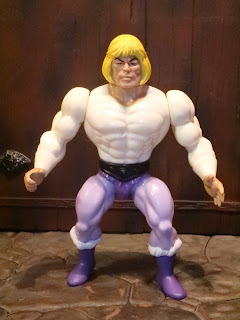 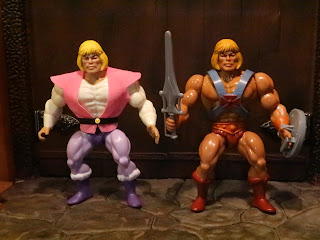 *On the left is Prince Adam while Super7's He-Man is on the right. As you can see, Adam and He-Man use the same bodies, just like their vintage counterparts. The headsculpts are the same, too, though Adam's skin is a bit lighter and his hair is a bit more yellow. 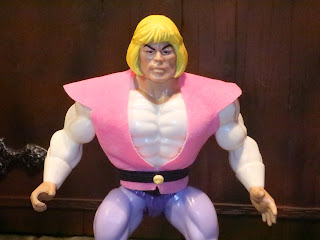 * Prince Adam looks just like you would expect: He-Man in pink and purple with brighter yellow hair. Adam is a nice looking figure that could easily fool a more casual observer into believing he really is a vintage MOTU figure. The proportions are right, the colors are fairly close, and the figure definitely "feels" like a vintage toy. 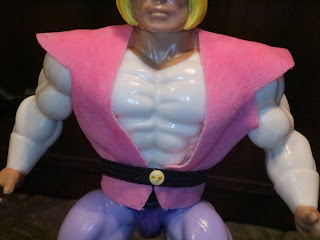 * Super7 did a nice job in crafting Prince Adam's vest. It absolutely is made from soft goods and features a separate, removable elastic belt. You can remove everything (though it's a bit of a hassle). 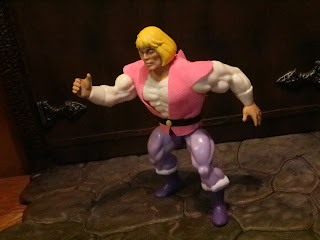 * Prince Adam is articulated just like his vintage counterparts with the exception of his swivel/hinge hips (these take the place of the rubber bands of the vintage toys). He stands well, feels solid and sturdy, and you can kind of make it look like he's dancing. 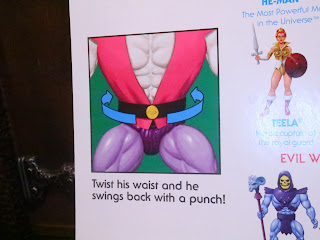 *  All of Super7's neo-vintage figures feature spring loaded swivel waists. I still have no idea what sorcery causes these figures to be able to punch like this but it works pretty well. It's fun to have a genuine action feature in a MOTU figure again, allowing Prince Adam to punch and slice his foes with just a turn of the waist. 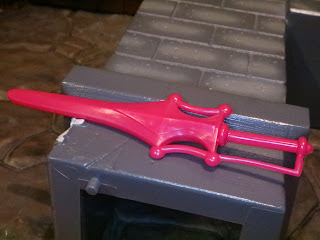 * Not only does Prince Adam come with his Power Sword, but here we get it in a magenta color, just like the vintage toy. It's a cool accessory that mixes the look and color of the vintage toy accessory with the shape of the Filmation Power Sword. It's a solid weapon and the toy can hold it well. 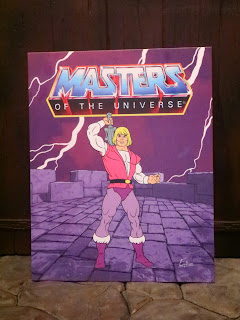 *  I really am quite fond of the art cards included with these figures. They kind of mimic the look of the minicomics in the vintage packaging but they're a simple cardstock art print. On the front is a really cool image of Prince Adam from Eamon O'Donoghue while the back features an image of the Filmation model of the character and some text. 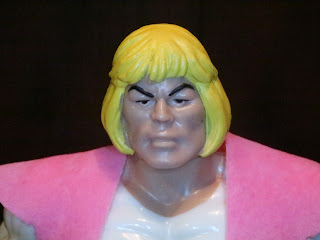 * Prince Adam features the same headsculpt as Super7's standard He-Man figure, which is true to the vintage design of the toy, but I really would have liked a new headsculpt. Considering that these are inspired by the Filmation animated series, a friendlier or smiling face for Prince Adam would have been incredible. 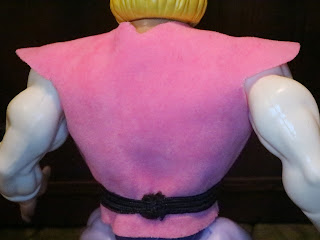 * I know Adam is know for his pink vest but here I think it looks too pastel. It's really more of a magenta or hit pink in the series, whereas this vest seems to be the same color of pink as you might expect to find on a baby blanket. Had it been a bit darker or had a bit more red in it, I think it would have looked even better and more accurate. 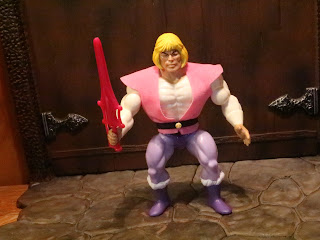 I was really looking forward to this release of Prince Adam and while he's not perfect, he's still a nice figure to have. I remember loving my Prince Adam figure as a kid because it felt like you could really reenact stories seen on the cartoon with him. Being able to "transform" Adam and Cringer into He-Man and Battle Cat was always an exciting part of playing with the vintage MOTU toys for me. Figures that functioned as civilian or de-powered version of the main characters (like the quick change Batman figures) were always a hit for me. Prince Adam is a Good and a 1/2 figure and I'm glad to have him.

Are you a fan of He-Man/ Prince Adam? Then check out my archive of multiple He-Man and Prince Adam reviews!