Minifigure Review: Trash Can Wave 4 (Slime) from M.U.S.C.L.E. Masters of the Universe by Super7 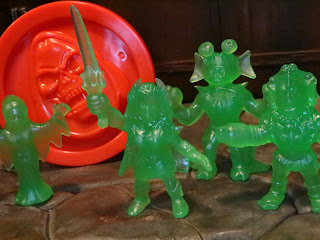 Today I'm checking out the last of the 2019 Power Con exclusives I picked up: The complete wave 4 of Masters of the Universe M.U.S.C.L.E. figures in slime green plastic. While Super7 released the previous three sets of M.U.S.C.L.E. figures in cool, convenient 3-packs, they opted to release series 4 in blind boxes under the Keshi Surprise label. It's a terrible idea: Why would I purchase blind boxed individual minifigures from an online store? Anyways, I held out from purchasing any of those until wave four got a "complete" release and this set of figures does give you one of each sculpt in cool "trash can" that looks like the vintage MOTU Slime canister. This series focused on the She-Ra and the Princess of Power cast which was a great idea. You get six members of the Evil Horde and six members of the Great Rebellion here. Ready to check these wee warriors out? Then join me after the break... 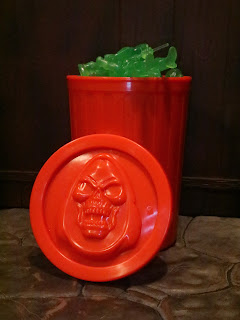 Includes: 12 figures and 1 can with lid. 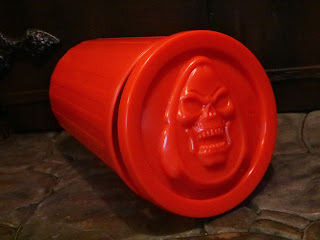 * The trash can definitely resembles the vintage Slime containers from the MOTU toyline. Rather than getting Hordak's portrait on the top, however, this can has Skeletor's face. Hordak's face might have made more sense here but it also may have been too confused as an actual vintage can. Plus, who can turn down Skeletor? 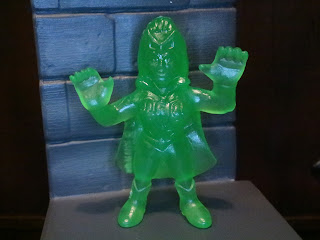 * If you've ever picked up one of Super7's M.U.S.C.L.E. figures then you know what to expect here. If not, know that these are mostly solid and not rubbery, which I like. The style on the line has changed over the years but these seem a lot like series 3 style-wise. Catra looks pretty cool and is very similar to her Filmation appearance. Some of the details are difficult to make out due to the translucent green plastic, though. 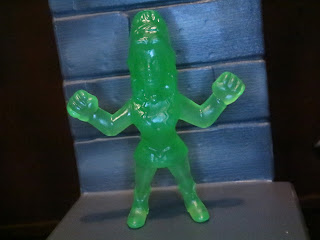 * Castaspella doesn't show up that often in MOTU merchandise, so it's really cool to see her in this set. Seriously, isn't this only like the third Castaspella toy ever after the vintage POP toy and the Masters of the Universe Classics figure? She might be hard to recognize off hand, especially with the washed out details, but also because she doesn't have as many instantly recognizable details. 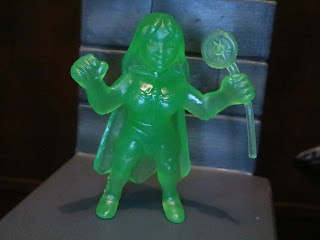 * Frosta is definitely a bit more recognizable than Castaspella, thanks to her cape and her cool staff. The staff is a bit warped, though, since the plastic is very thin. Only a few of these figures have weapons in hand but they all have slightly oversized hands, which helps to give them the M.U.S.C.L.E. feel. 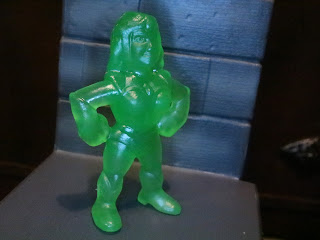 * And here's Glimmer! Glimmer's another figure that might be tougher to recognize with the obscured details of the translucent plastic but if you look closely you'll see that there are plenty of recognizable details present. She's in a very "take charge" kind of pose, which is great: We all know Glimmer's a boss and there's nothing you haters can do about it. Long live the Great Rebellion! 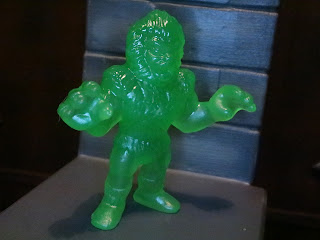 * Oh yeah! Here comes Grizzlor! Grizzlor has always been one of my favorites and while looking at him for a second I kind of thought this figure looks like Moss Man. It's due to the green! This is definitely Grizzlor, though, and he still looks petty fierce even in this smaller size. I like the clawed hands! 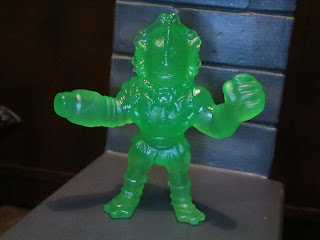 * Hordak is definitely one of the best figures in the line, possibly because he has such a recognizable shape. Taking after the Filmation cartoon, this guy has a cannon in place of his right arm. I wish he had an Imp figure with him, though. Heck, I'd love a little set with Imp, Kowl, and Loo-Kee. I love those crazy little guys! 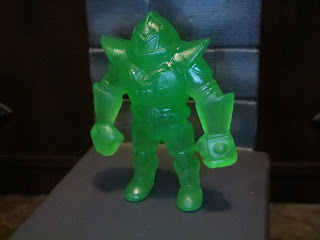 * The Horde Trooper is also very recognizable by his shape. This is a darn cool looking mini and I really hope Super7 puts out another complete set of these in a solid color scheme so I can admire the details better. How cool would it be if they sold a 6-pack of Horde Troopers in grey? That would be such a flipping sweet idea. Super7, you need to jump on that! 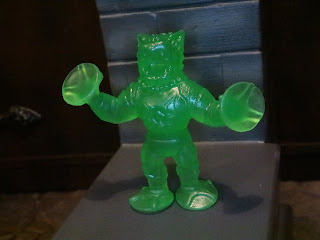 * If there's one character who flourishes in this set in translucent green, it's Leech. Leech not only looks amazing in green but the translucent color makes his suction cup claws look even better. They look so weird and alien! 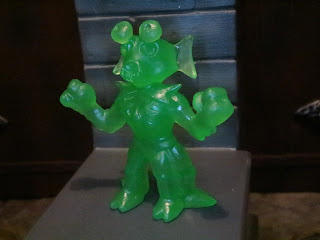 * Mantenna is another figure that you'll look at and instantly recognize because of his silhouette. There is a lot going on here, from his multiple legs to his bugged out eyes! This is another figure I really want to get in a solid color to fully appreciate the detail in this tiny sculpt. 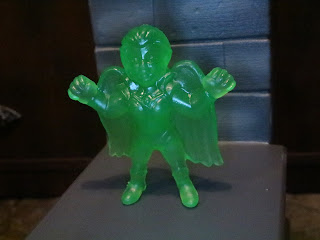 * When I look at Queen Angella, I immediately think of Hawkman from M.U.S.C.L.E. as her wings give her a similar silhouette. This is definitely Angella, though. Her wings make her a little back heavy, so she does tend to tip over rather easily. 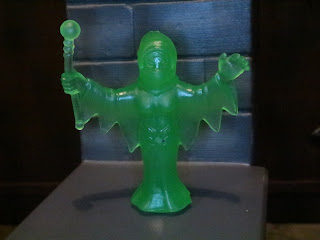 * The final member of the Evil Horde in this set is... Shadow Weaver! 2019 has been a phenomenal year for Shadow Weaver as she has had lots of toys made in her likeness. Not bad! She's also very recognizable due to her silhouette and she looks fantastic! I love the shape of her cloak. She also has a great pose, as it looks as if she's in the middle of casting some horrific spell! 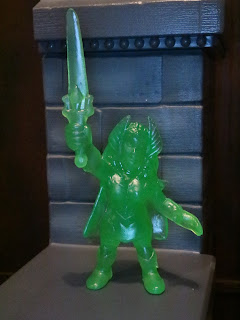 * Last, and certainly not least, is She-Ra. She-Ra is pretty impressive as she's depicted while in the middle of raising the Sword of Protection! How cool? I'd love to get a few more of these in other colorways but this one is still pretty slick. 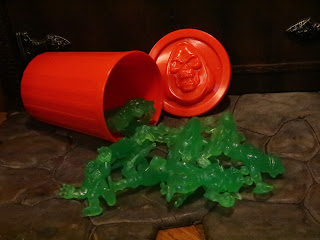 This is a cool set, both because it looks great with the translucent green plastic, comes in the cool trash can, and comes in at a pretty solid price (around $2 a minifigure is always a solid price). I do wish the translucent green didn't wash out the details so much, but that's kind of the nature of dealing with a unique colorway. I'm glad to have this set, though, and I really hope Super7 offers up another full set of series 4 in a solid color. I just cannot imagine trying to pick these up in the individual blind boxes. This one is a Great set, though, and if it's the only series 4 set I get I guess I'll be OK with that.


If you're a fan of Queen Angella, I've also checked out the MOTUC Angella figure.

Are you a Catra person? Then check out my review of Catra from Super7's Battle for Etheria 2-Pack and Mattel's She-Ra and the Princesses of Power Catra.

Has Castaspella put a spell on you? Then check out my review of the MOTUC Castaspella!

If you're a fan of Glimmer, also check out my review of the MOTUC Glimmer and the She-Ra and the Princesses of Power Glimmer.

If you're a Grizzlor groupie then check out the alternate 200X Grizzlor head from the Heads of Eternia pack, the ReAction Grizzlor,  Grizzlor (Dark Variant), and Grizzlor (Toy Variant), and the Club Grayskull Grizzlor.

If you're a fan of Mantenna, go stand over there and check out the MOTUC Mantenna, the Filmation inspired Club Grayskull Mantenna, and the ReAction Mantenna and Mantenna (Toy Variant).

If you're a She-Raver who digs She-Ra/ Princess Adora then check out the figures I've reviewed: The Masters of the Universe Classics Galactic Protector She-Ra, the Club Grayskull She-Ra, the ReAction She-Ra, the She-Ra from the Super7 Battle for Etheria 2-Pack, the 1/6th scale Starburst She-Ra, and Mattel's She-Ra and the Princesses of Power She-Ra, Force Captain Adora, She-Ra vs Shadow Weaver, and Battle Armor She-Ra and Swift Wind.

I've reviewed so many Skeletor items that he now has his own review archive: Check out Snake Mountain for a list of all of my Skeletor themed reviews!