The Scream of 31 Days of Toy Terror: The Bride of Frankenstein from Universal Monsters ReAction by Funko 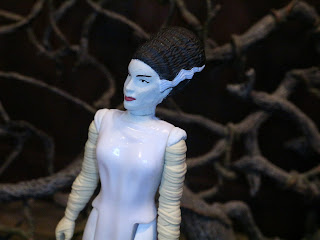 For today's installment of The Scream of 31 Days of Toy Terror, let's travel all the way back to 1935 for a trip to the movies! Today's feature: Bride of Frankenstein! Bride of Frankenstein is James Whale's 1935 sequel to the original Frankenstein and is often considered to be the superior film. Starring Elsa Lanchester as the titular Bride, this film is one of the prime films in the Universal Monsters canon featuring one of the most visually iconic characters to appear in horror cinema. Funko released the Bride back in 2014 in their Universal Monsters ReAction line and while I've owned the entire series of figures since they first came out, this year I'm making a concerted effort to finish reviewing the entire series. Let's check out the Bride of Frankenstein after the break... 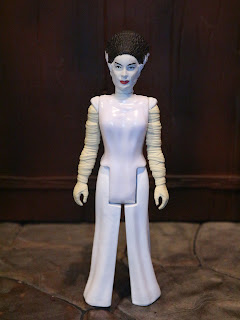 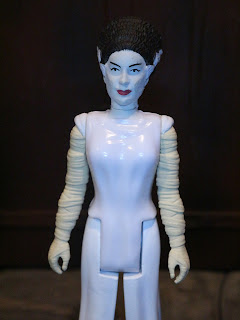 * The ReAction range of figures (which Super7 now produces) is intended to replicate the look and feel of toys like the vintage Kenner Star Wars figures from the late 1970s and early 1980s. The quality of the vintage Star Wars line and other similar lines varied quite a bit, and so did Funko's efforts. The Universal Monsters line really looked much better than vintage lines, particularly the arms and headsculpt. It's a decent blend between the vintage aesthetic with modern sculpt and paint, at least from the waist up. We'll talk about the legs in a minute, as things aren't as good there. 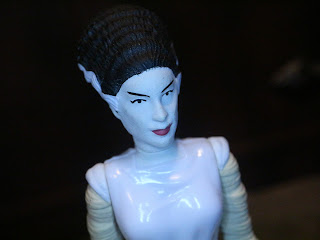 * The headsculpt is excellent. This is a 1/18th scaled figure and, honestly, it's better than what most lines are putting out in the scale, even today. The sculpt is very sharp and the paintwork is quite clean and neat, particularly for such a small figure. 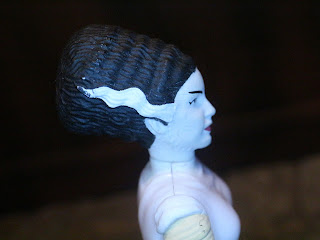 * The hair really sells the figure, though. It's awesome! The Bride's hairdo is iconic and not only is it sculpted but it features the classic white stripe up the side. The paint might look a bit rough in the picture but it's actually not noticeable in hand. Remember, she's only 3 7/8ths inches tall. 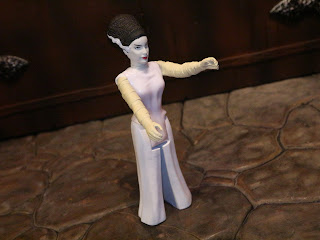 * Like a vintage Kenner figure, the Bride features swivel hips, swivel shoulders, and a swivel head. She feels like she's made of a much higher quality plastic than many of the other ReAction figures from the Funko era. She stands well and looks great with most other action figures of a similar style. 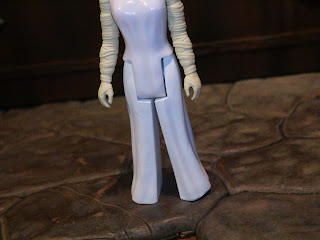 * My biggest problem with this figure is that the legs, which are supposed to be the bottom of a robe, just don't fit together properly. They look bent! If they fit together flush things would look fine but these just don't cut it. 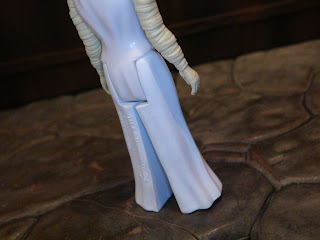 * The second issue I have with the figure is that the legs are a noticeably different color from the torso. It's supposed to be one solid robe but the mismatched colors, particularly being two different shades of white, makes the two halves of the outfit clash. 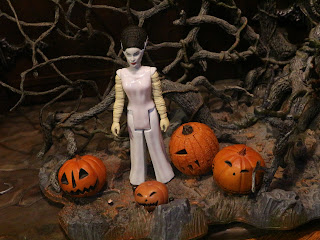 The Bride of Frankenstein isn't a bad figure at all. In fact, from the waist up she's excellent with a fantastic headsculpt and some really phenomenal work on the wraps on her arms. The oddness of the legs, though, really drop the overall score. She's a Good figure, and you'll certainly want her if you're completing the set, but she's sadly not one of the standouts from the line. If you're looking for some great Halloween viewing this October you definitely want to give Frankenstein and Bride of Frankenstein a view.  They're two key hallmarks of the history of horror cinema!


This is the first figure of the Bride of Frankenstein I've reviewed on the site. For more reviews from Funko's Universal Monsters ReAction line check out the following:
The Invisible Man
The Mummy
The Phantom of the Opera
The Wolfman
Posted by Barbecue17 at 10/06/2019