The Scream of 31 Days of Toy Terror: Dracula from Universal Monsters: ReAction by Funko 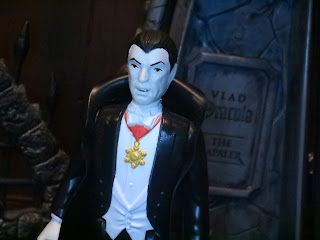 Only one more day until Halloween! That means that we're almost at the end of The Scream of 31 Days of Toy Terror, but it's not over yet! Today I'm checking out Funko's ReAction Dracula figure from the Universal Monsters line. I purchased the entire set of these when they came out five years ago and they're still some of my favorite faux-vintage Kenner styled figures. Dracula is one of the biggest movie monsters of all time and this figure is based on the portrayal by which all others are measured: Bela Lugosi in 1931's Dracula. Let's check this guy out after the break... 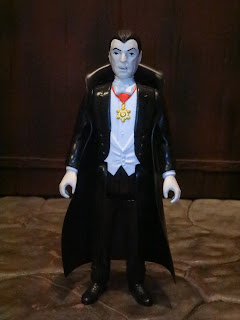 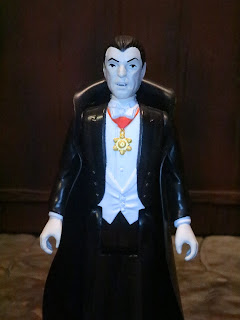 
* This version of Dracula nails the classic look in a very Kenner way. Actually, the figure looks a little more advanced than the early Kenner stuff, so maybe this is a figure that would have appeared during the ROTJ era of Kenner figures. The Count is wearing his tuxedo, his mysterious medallion, and a black cape. The sculpt is sharp, the paint details neat and clean, and the figure's black and white colors scheme really fits the dark, moody ambience that surrounds the character. 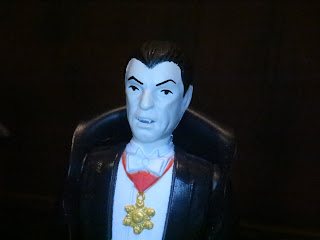 * While this isn't a fantastic Bela Lugosi likeness (Bela Lugosi's likeness is rarely replicated, probably due to likeness rights issues with his estate) but it is a pretty good Dracula likeness. He's got pale skin, a widows peak, pointy features, and fangs. Hey, you know what? Bela Lugosi never wore fangs for his Dracula role. This is more generic Dracula than Lugosi Dracula, so far as the head goes. Heck, you can even pretend it's Conde Dracula/ Carlos Villarias from the Spanish version of Dracula. It kind of looks like him, too. It's still a decent Dracula portrait and is fitting for the retro vibe of the toy. 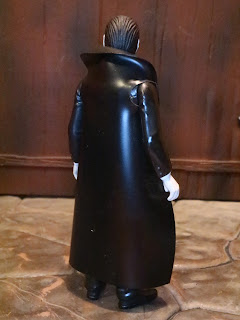 * Dracula comes with a vinyl cape, just like the vintage Star Wars figures wore. It looks a lot like Darth Vader's cape, which is actually a plus. I wouldn't try to remove it, as it could tear, but you could if you wanted to. 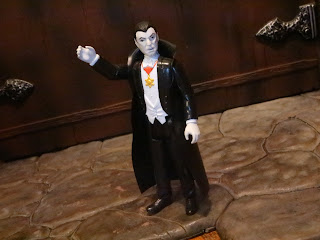 * Like a vintage Kenner figure, Dracula features swivel hips, swivel shoulders, and a swivel head. He feels like he's made of a much higher quality plastic than many of the other ReAction figures from the Funko era. He's a pretty decent vampire figure to menace your other Kenner styled figures. 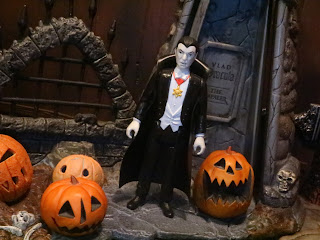 I really like this guy. While the headsculpt isn't dead on Lugosi the costume is. This really is an excellent Dracula figure and is pretty recognizable and iconic looking. He's a nice mix of good sculpting with some details that feel authentically vintage (like the cape) and it's that mixture that really makes the figure work. Dracula is a Great figure and a really nice piece whether by himself or hanging out with his Universal Monster squad. Super7 has resculpted this figure and released another ReAction Dracula recently, so you might want to check that one out, too. Which one do you prefer?


Do you get a kick out of Dracula? I've reviewed plenty of other Dracula and vampire figures including the vampire from the Playmobil two-pack 9307 and the Take Along Haunted House, the Vampire bobble head from Classic Friends, Dracula from the Big Bucket of Monsters, the Dracula Playset from McFarlane's Monsters, and Dracula from Monster Fighters.

For more Universal Monsters ReAction reviews, check out the following:
The Bride of Frankenstein
Frankenstein
The Invisible Man
The Mummy
The Phantom of the Opera
The Wolfman