The Scream of 31 Days of Toy Terror: Velociraptor from Jurassic Park by Kenner 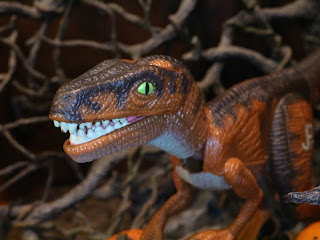 The 1990s aren't always remembered as one of the best times for horror cinema but they definitely had their moments, particularly in regards to creature films. While it's usually remembered as more of a sci-fi adventure film, Jurassic Park definitely scared quite a few folks and absolutely borrowed plenty of key elements from the horror genre to thrill audiences in 1993. I was 9 when the film came out, so I feel like I was the perfect age for Jurassic Park and thus I also had lots of the Kenner action figures. Kenner managed to combine evergreen appeal of dinosaur toys with the frenzy of a Steven Spielberg summer blockbuster to create an incredibly popular toyline! This Velociraptor is one of my original Jurassic Park toys and she's getting a spot on The Scream of 31 Days of Toy Terror! Enjoy one of the best onscreen menaces in all of cinema... 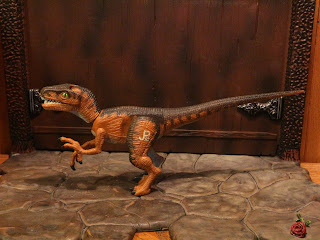 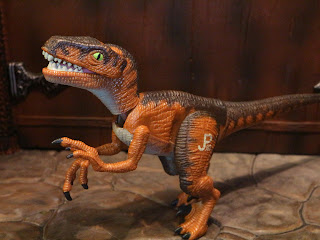 * When the Kenner Jurassic Park dinosaurs came out, they were streets ahead of any other dinosaur toys at the time. The closest comparison in quality were the Tyco Dino Riders but they definitely didn't look nearly as menacing as anything Kenner put out. The Jurassic Park dinosaurs had rather complex paintjobs and excellent sculpting, showing off the detailed skin patterns, just like in the film. 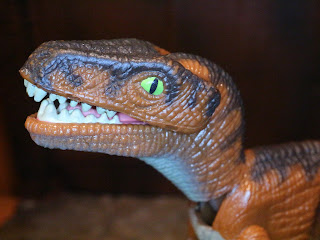 * One of the best things about the Jurassic Park dinosaurs is that they manage to look realistic while still having a lot of character in their faces. The Velociraptors from the first film are some of the most recognizable creatures in film and, despite the action feature, the head is exceptional. I love the green eyes! So creepy! 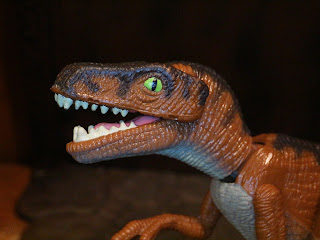 * The smaller Jurassic Park dinosaurs were sold on cards, similar to the standard human figures in the line. Each dinosaur typically had an action feature and the Velociraptor's was called "Dino-Strike Slashing Jaws!" Squeeze the raptor's legs and her neck strikes forward while her upper jaw lifts up, opening her mouth and exposing her teeth! It still works pretty well and is pretty fun. It doesn't get in the way of standard articulation, either, so that's another plus. 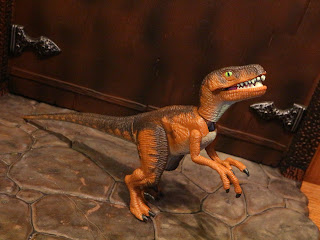 * Tyco's Dino-Riders were some of the first dinosaur toys I remember to have any actual articulation and Kenner nicely followed that model with the Jurassic Park line. The raptor's legs and arms move, allowing for plenty of fun posing her going after unsuspecting humans. It's still insanely fun to have the figure pounce unsuspecting humans! 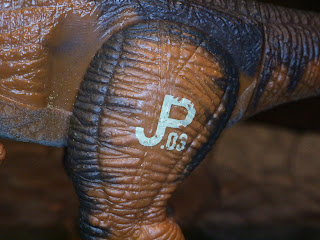 * To "brand" the dinosaurs as official Jurassic Park toys, Kenner came up with a cool logo and began numbering the dinosaurs. It's definitely a branding thing, but I've always liked it.


*The Jurassic Park figures each came with a very cool trading card with original art. I don't have the original card anymore, but the Velociraptor's card was called Raptor Attack! 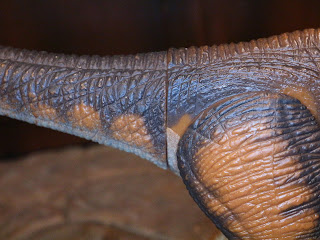 * The tail does swivel, so that's cool, but the two halves don't match up quite right. See how the painted underbelly doesn't join together? That's kind of always bothered me, but in 1993 I didn't have a public forum where I could complain about it. 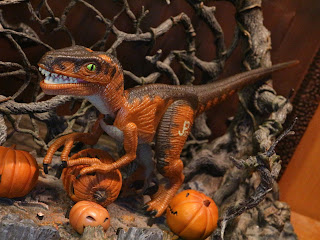 I've always liked the Jurassic Park line and while I don't heavily collect the line, I do still love the dozen or so figures leftover from my childhood. The Velociraptor is a Great and a 1/2 figure and while it is over 25 year old, it's still one of the best expressions of the traditional Jurassic Park Velociraptors in toy form to date. As a kid I used this raptor along with a couple of the Tyco Deinonychus figures as part of my raptor pack (I later got the electronic Jurassic Park raptor from a yard sale). She's still one of my favorites and I'm glad to bring her back out for this Halloween!