The Scream of 31 Days of Toy Terror: The Wolfman from Universal Monsters ReAction by Funko 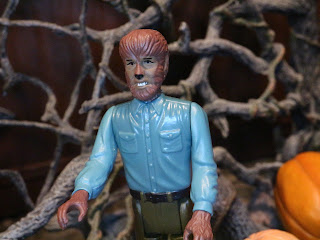 For today's installment of The Scream of 31 Days of Toy Terror we're going to be visiting the misty village of Llanwelly, Wales to sneak a peak at the Wolfman! While most of the classic Universal Monsters movies are good, the Wolfman is easily one of the best. While it has fantastic atmosphere and an excellent creature design for the Wolfman, Lon Chaney Jr.'s performance as Larry Talbot is just so darn likeable that you immediately sympathize with the character. Chaney played the character in 1941's The Wolfman and in four sequels, including the excellent Abbott & Costello Meet Frankenstein. If you have kids who are interested in some spooky yet fun movies for the Halloween season, the Abbott & Costello films are excellent. Of course, this figure is definitely based on the original classic film. This Wolfman is from Funko's 2014 Universal Monsters ReAction line. I reviewed a few of these the year they came out and I just might finish reviewing the line this year. Let's check out this vintage styled Wolfman after the break... 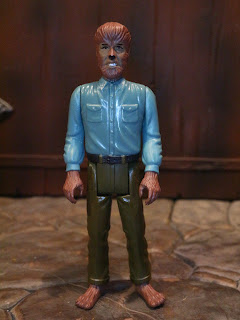 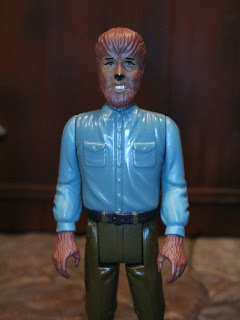 * Funko seemed to have big plans for the ReAction brand (which is now owned by Super7) and for every line they had that was a hit, they had a miss or two as well. I definitely think the Universal Monsters line was a hit, though, and perfectly captured what ReAction needed to be. While you can see the vintage styling of an early 1980s Kenner action figure, the sculpt is still detailed enough to make the figure appealing. The Wolfman is dressed rather casually (is he wearing Ash's clothes?) but the details on his shirt include lots of folds and creases and visible buttons. His belt even has holes for the pin and the trousers have belt loops. Funko's ReAction line had very uneven quality but the Universal Monsters were definitely some of the best figures released under that range. 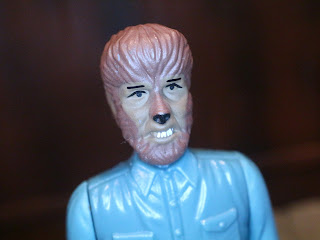 * The headsculpt is quite good. The Wolfman is easily recognizable and while it might not be 100% accurate to the film, it's not bad by any means. The paint work is pretty sharp here. I'm particularly a fan of the big black nose and the bared teeth. 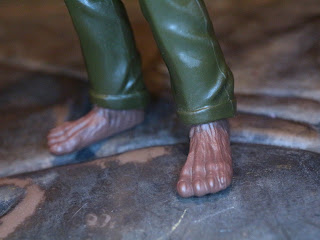 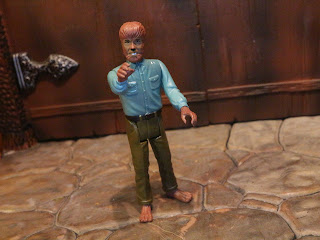 * If you've ever picked up a 5 point of articulation figure, similar to a vintage Kenner Star Wars figure, then you know what to expect: Swivel hips, swivel shoulders, and a swivel head. You're not going to be able to do a lot of posing but you can still have fun. Seriously, Kenner kept this articulation scheme for years, and it never stopped my fun. These also feel really nice. The quality on the Universal Monsters ReAction figures was much better than most other ReAction lines from Funko. More along the lines of the quality of Super7's current offering, really. 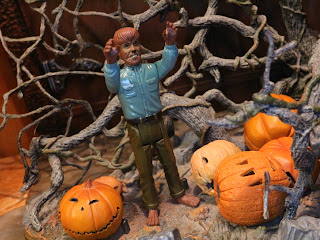 The Wolfman is one of my favorite figures from this series. I wish Funko had gotten a chance to release more figures, although Super7 has continued the line so there are more characters and some nice second versions offered. With a solid sculpt and paintjob mixed with a retro feel, the Wolfman is one of the best figures in this line. He's a Great figure and a fun collectible from one of the Universal Monsters greats. Aahwoo!!

I've reviewed other action figures of werewolves, such as the Imaginext Wolfman, Luke Talbot (The Wolfman) from Playmates' Monster Force, The Wolfman Monster from The Real Ghostbusters, the McFarlane Monsters Werewolf Playset, the Playmobil Werewolf & Witch set, and the Nightmare Before Christmas Wolfman ReAction figure and Wolfman Nano metalfig,  but not anything else based on this specific version of the character.

For more Universal Monsters ReAction figures, check out the following:
The Invisible Man
The Mummy
The Phantom of the Opera
Posted by Barbecue17 at 10/02/2019