The Scream of 31 Days of Toy Terror: Michael Myers from Cult Classics Icons by NECA 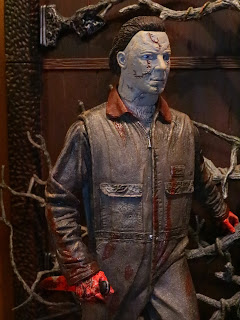 Today I'm checking out the first Michael Myers figure I ever owned: Michael Myers from Rob Zombie's 2007 Halloween remake. While this figure was originally released around August 2007, NECA rereleased it again in 2009 as part of the Cult Classics Icons line. NECA's main Cult Classics ran from 2005-2008 and delivered lots of characters from various horror, sci-fi, and fantasy films, but in 2009 NECA released a number of figures from the line at lower prices with fewer accessories, no bases, and now on traditional blister cards rather than clamshell packaging. Michael Myers was one of the first series figures and I remember finding him on a cold and rainy October afternoon in 2009 at a Toys R Us that no longer exists. If I were ranking Zombie's Halloween, it would probably be in the middle of the Halloween films for me: It's a solid movie, definitely better than 4, 5, and 6, though I don't like it as well as 1, 2, 3, and 2018. Regardless of where you place it, though, it's nice to have a depiction of this version of Michael Myers on the shelf. Since we're looking at horror movie characters this year for 31 Days of Toy Terror, it was the perfect time for this version of Michael to make an appearance. Let's check him out after the break... 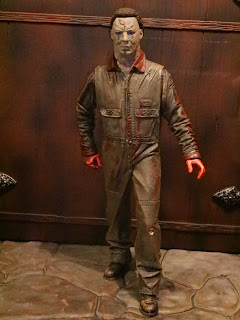 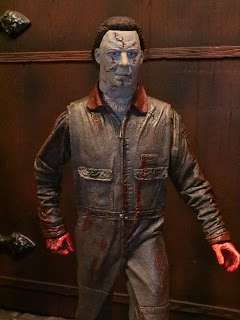 
* Played by Tyler Mane, this version of Michael Myers is massive and imposing. Not that Michael Myers was never no imposing, but Tyler Mane's performance of Myers definitely seemed much larger and more physical than other takes on the character. Michael's boiler suit is brown here here and it's really well sculpted and just absolutely covered in blood. The make of the figure is definitely a great example of NECA's earlier work: Really strong sculpting with minimal articulation to break up the sculpt. 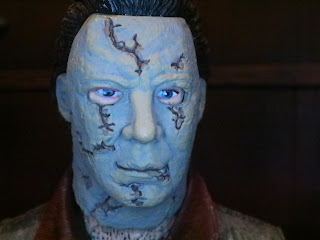 * I'm not totally thrilled with the likeness here but I do like the detail of the mask sculpt. The mask from the Rob Zombie films has a lot of stitches and whatnot on it, making it just seem all the more grimy and nasty. The stitches look good, as does the work on the texture of the mask. 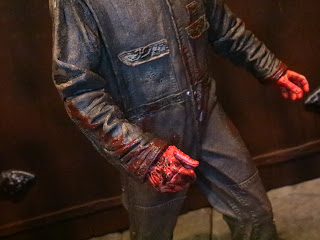 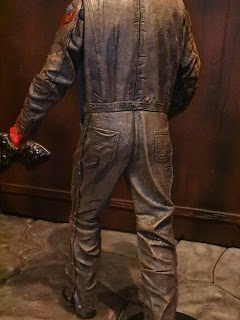 * Here's a better shot of the back of the suit, showing off the amount of detail on it. Seriously, this work is still very, very high quality and if you changed up the likeness and added more articulation, it would still fly today for sure. 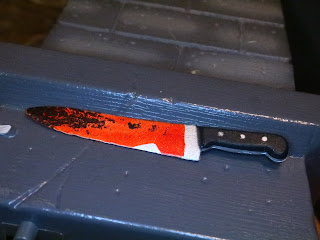 * The original release of the figure came with quite a few extras such as an alternate head, an additional knife, and a display base with Judith Myers' tombstone. The Cult Classics Icons releases drops everything except for Michael's signature knife. It's a solid sculpt with good paintwork on the handle and a fairly effective mix of blood and whatnot on the blade. Ick! 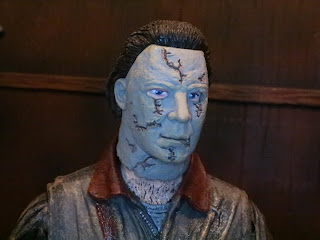 * Looking at the sculpt overall, I just don't think NECA nailed it. I do think Michael Myers's mask is tough to nail but here it looks too friendly and the hair looks off. It looks too neat, almost like it was slicked back with gel. Also... the mask makes Michael look friendly, almost as if he's smiling. Weird, huh? 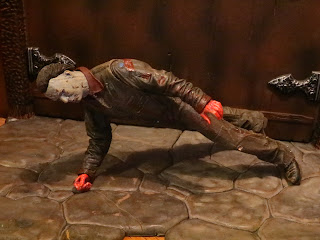 * This figure was clearly designed to stand upon the base included with the original 2007 release but the Cult Classics Icons release didn't include that, meaning that unless you use another stand or lean him against something, Michael Myers is definitely going to fall over. I know NECA was trying to get more usage out of these molds and get some of the figures back in circulation for Halloween 2009 at a lower price point, but having a figure that can't stand on it's own is definitely a bummer. 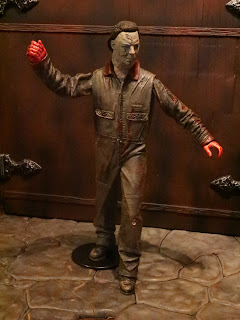 * While Michael Myers' articulation isn't terribly out of line with the time of his release for what NECA was doing, it has to be noted that there were still companies doing better articulation, even in 2007. Some simple balljointed ankles and wrists would have helped tremendously, as would have something better than swivel elbows. The head is great, though, as it's a balljoint with a terrific range of motion. 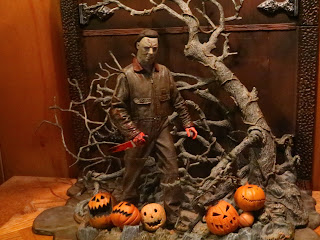 I gotta admit that with the limited articulation, the not quite right face sculpt, and the inability to stand, this is a pretty Eh release. Yeah, it was kind of a budget release at the time (I think these guys sold for around $10 bucks, which even seemed like a good price for a NECA figure back in 2009) but the inability to stand on his own brings Michael down quite a bit. That doesn't stop the early NECA Halloween figures from being sough out by collectors (I wish I owned the Evolution of Evil and The Night He Came Home sets) but it does make it seem less like something worth plunking down too much cash for. Hopefully NECA's will get ready to release a bunch of Halloween merchandise soon, especially with two new films coming out in the near future.