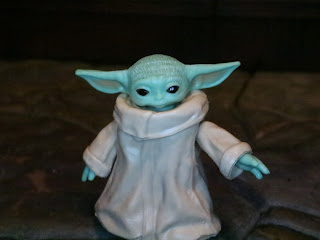 I'm way late on this review but there's no way I'm skipping the Child, AKA Baby Yoda. The Mandalorian is an awesome show, and I'm pumped about the upcoming Season 2, but it's crazy how huge of a cultural phenomenon Baby Yoda has become. I mean, this little guy is everywhere! Even more astounding is how many people are nuts about the character who don't even seem to be that into Star Wars. He's just an adorable character with a lot of charm. If you're reading this I'm assuming that you're probably into Star Wars and that you know the character is not (well, probably not) a baby version of Yoda, who dies around five years before the beginning of The Mandalorian. Still, since we don't know the character's real name, nor his species name, nor his home planet, Baby Yoda has definitely stuck more than the Child has. When everyone realized how popular the character was going to be it seemed like every company jumped to lightspeed to get product on shelves. Remember how many times Mattel and Hasbro have told us it takes 1 1/2 to 2 years to get a new figure on shelves? Well, that apparently doesn't apply when Baby Yoda is involved and there is money to be made as Mattel, Hasbro, and Funko got product out on store shelves within about 6-7 months of the character appearing on the show (which apparently was the first time anyone from those companies saw him). This version of the Child is from the Star Wars: Black Series and is sold in his own teeny, tiny box. Let's take a look and see how he turned out after the break... 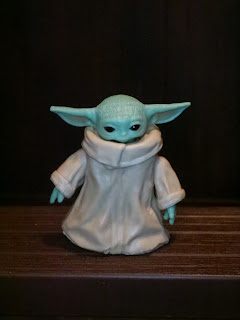 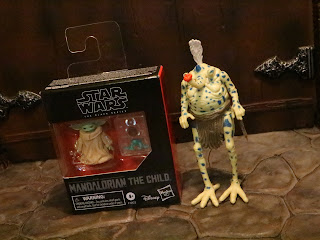 
* Here's a brief shot of The Child in his packaging. He comes in a box like most other Black Series figures but it is small. How small? That's a 3 3/4 inch vintage Sy Snootles standing next to the Child (I had her nearby when taking the pictures), so you can see how small he is. Yes, even the package is small! At retail these little guys come in a tray that sits on the shelf, holding all of the figures. 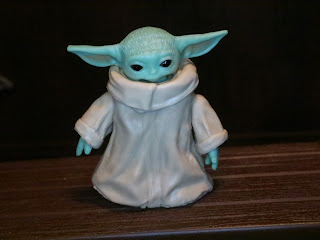 * The Child definitely looks like the character from The Mandalorian. He's tiny, cute, and pretty simple. His outfit looks a bit oversized but that's accurate to the show. He's got the very young toddler look where almost everything seems to be a bit oversized to him, which is pretty cute. 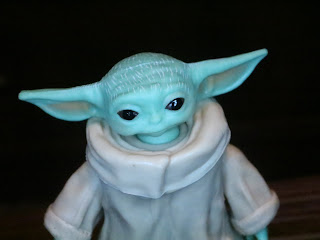 * The headsculpt is super tiny on the Child (he's smaller than the vintage Yoda figure) but the detail is pretty good. He has some very fine hair printed on his head (it's actually hard to see with the naked eye), adorable ears, and those piercing little black eyes. I took the picture at a weird angle to show off some detail but the neck ball joint isn't this visible from a normal perspective. 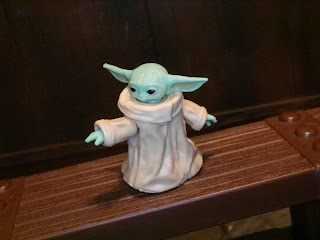 * Surprisingly, Baby Yoda isn't the smallest articulated figure in The Black Series (that would be Babu Frik) but he is still petty tiny. He has more articulation than I expected, though, and all of the joints are true ball joints. I'm not sure you're really going to get that many poses out of the figure but he can raise and lower his arms and move his head. Seriously, for being this tiny I'm fairly impressed. 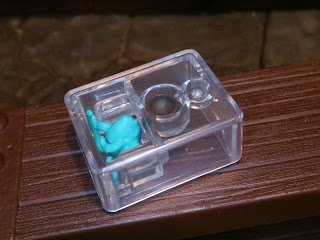 * The Child comes with three accessories and they're all really tiny. Wisely, Hasbro included a two-piece storage case for the accessories. That's a really nice idea as it's really quite necessary and it adds a bit of extra value to the figure. 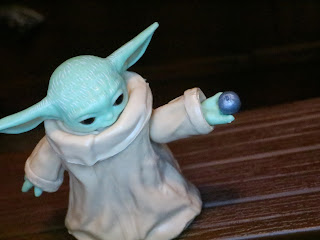 * Let's take a look at the accessories. First up is the knob from the Razor Crest that the Child keeps taking. This is super tiny, like smaller than a BB tiny. Honestly, it's about the same size as that little protective thing on the tip of a new pin. There's actually a little spot that loots like the spot where it would screw on top of a gear shift, too. 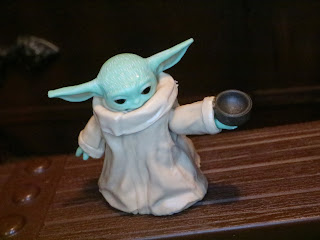 * Next up is the bowl of bone broth that the Mandalorian orders for the Child. It's a simple empty wooden bowl and Baby Yoda can hold it in either hand. 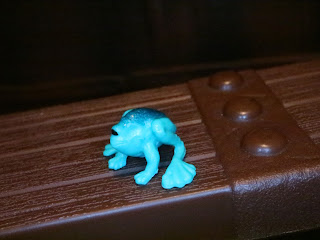 * Last up is one of the Sorgan frogs that the Child attempts to eat in the episode Sanctuary. It actually has a few paint applications, maybe even more than the Child has. 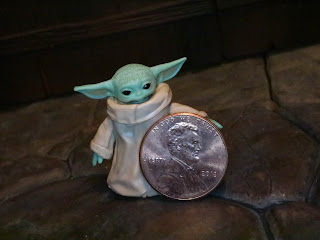 * The Child is small. Really small. That's no problem but it's really strange that Hasbro released him on his own. He feels like he would have been better suited being released with either his elaborate floating crib or with another figure, maybe a variant of the Mandalorian. Despite the extras this still doesn't feel like a full release. The Porgs were small, too, but they were also cheaper. 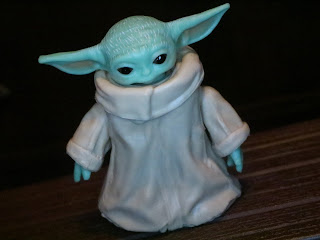 * While later versions of the Child have some paint applications given to his robe, the early release is just flat tan. Even though he's a small figure, it's still rather bland for a figure designed to be compatible with the rest of the Black Series. 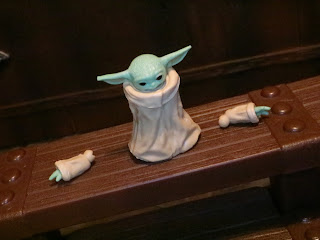 * Baby Yoda has balljointed shoulders and, unfortunately, they tend to fall off. They're not broken but they don't fit in very tight. Try to pose him and they'll most likely fall off at least once or twice.

* While his arms can move he really can't interact very well with his accessories. Hasbro probably should have given him some extra posed arms with some of his accessories "attached." He can't hold his bone broth in a convincing slurping pose, which is a major disappointment. 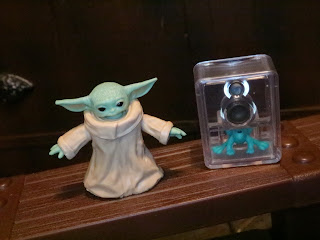 When the Child/ Baby Yoda proved to be a hit Hasbro moved full speed ahead to put out product  as soon as possible. While I imagine Hasbro wanted to have full cases of just this little guy to sell, he really feels like he should have been an accessory to a larger figure or packed with a larger accessory like his hovering crib. That being said, he's still a very desirable little figure. It is impressive what Hasbro was able to do with such a tiny figure even if he feels a bit rushed. I'm giving him a Good and a 1/2. Few of us can resists the adorableness of Baby Yoda and it's likely that Hasbro will release him again in the future with more accessories, extra heads, etc.

This is the first figure of the Child, AKA Baby Yoda, I've reviewed. For more reviews from Star Wars: The Black Series Phase III check out the following: