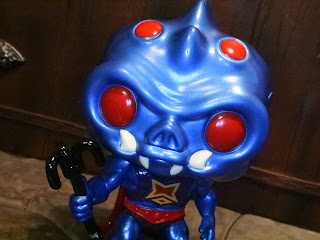 Back in July I reviewed Funko's Webstor #997 POP! vinyl figure from Masters of the Universe. Webstor was part of the most recent full series of MOTU POP! vinyl releases and was a standard figure but we learned that there was an upcoming "Metallic" variant of Webstor, too. It was scheduled to be a Hot Topic exclusive and both POP! and MOTU collectors were checking Hot Topic's website anxiously to get their hands on the Evil Master of Escape. Well, it turns out that while the metallic Webstor variant was intended to be a Hot Topic exclusive he somehow ended up at Walmart, the current home of most MOTU collectibles. Apparently somewhere between production being completed and the figure shipping out Webstor's exclusivity changed. While Hot Topic has an online store that is still active I wonder if the change was made during the early days of the Covid-19 pandemic when it seemed likely that Hot Topic stores would be closed for an unknown period of time. Since Walmart was already getting lots of MOTU exclusives and remained open, maybe Funko just swapped things around? What do you think? Let's jump in and take a look at this simple paint variant after the break... 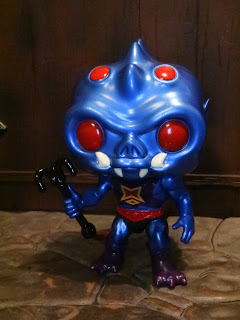 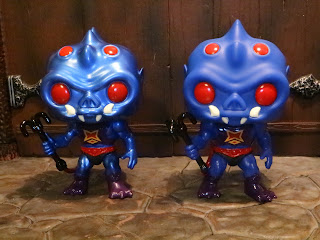 Comparison:
* The metallic Webstor is on the left while the standard Webstor #997 is on the right. Other than the metallic paint on the Hot Topic/ Walmart Webstor, there is no other difference between these two figures. 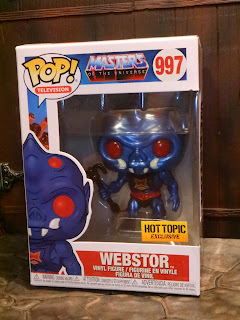 The Packaging:
* Here's a quick shot of the packaging. Yeah, I know we all know what Funko POP! packaging looks like but I did want to include this one since it has the "Hot Topic Exclusive" sticker o the front. But I bought it at Walmart, crazy, huh? 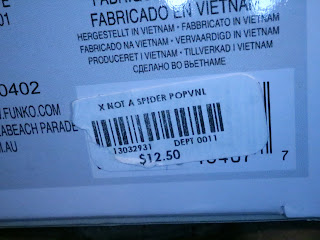 * Here's another funny detail. What is this little tag on the bottom? Webstor didn't cost $12.50 at Wally World (he was the usual $8 -$9 dollars) so this is Hot Topic's sticker I'm guessing. Furthermore, why does it say "X Not a Spider POPVNL" I guess they were wanting to clarify that Webstor is an Arachna and not a common spider, right? Seriously, I have no idea what this is about but it struck me as funny. 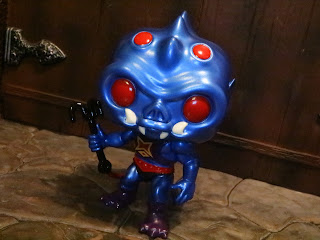 The Positives:
* Webstor is absolutely the same as the standard figure except that he's got metallic paint. Overall it makes his color scheme seem a bit darker though he does have a nice glossy sheen to him. I wasn't sure at first but now I think I might like him a bit better than the standard Webstor. He seems more spidery for sure. 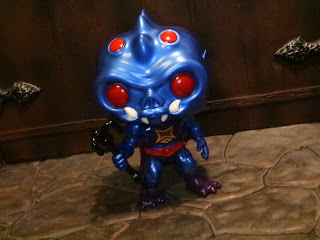 Metallic Webstor isn't the most exciting variant by any stretch of the imagination as he's just a different shade of blue than the previous release. Honestly, the whole novelty of him being a Hot Topic exclusive sold at Walmart with a bizarre "X Not a Spider POPVNL" sticker might be even more interesting than the figure himself. Walmart sells POP! vinyls cheaper than most places, though, so you're getting a slightly improved Webstor for less. I think he's a Great and a 1/2 exclusive of one of the less popular MOTU characters and it's nice to see Webstor, AKA Araneus son of Raknus, get some more love.
Webstor hasn't gotten a lot of love here lately, as the only other item I've reviewed is the POP! vinyl Webstor #997.
For more reviews from POP! Television check out the following: