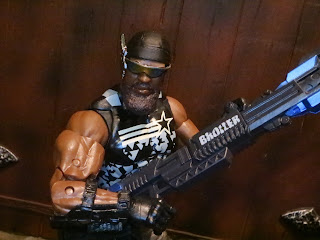 I found the Target exclusive Roadblock the same day as I found the Cobra Trooper and, thus far, these are the only two figures from the Target exclusive Special Missions: Cobra Island set that I have found. I'm really, really hoping that Hasbro doesn't rely on repaints and variants too frequently in the G.I. Joe Classified Series as it is one of the things that bogged down many of the previous G.I. Joe lines. Fortunately, Special Missions Roadblock feels very different from the series 1 Roadblock despite being mostly the same figure with some new details and such. Thanks to the new headsculpt I've even some folks suggest that this figure wasn't intended to be Roadblock but his cousin, Heavy Duty. The presence of the exact same tattoo in the same spot, the face sculpt, and the fact that Hasbro straight up is referring to this figure as Roadblock makes me dismiss that, but it is interesting to consider (Hasbro has reused the same headsculpts for multiple characters in previous Joe line). I wasn't originally planning to get this version of Roadblock as I kid of intend to be more selective with this line (I skipped the exclusive Snake Eyes and skipped preordering the Pulse exclusive Cobra Commander) but seeing this guy in person made me more impressed with him than I thought. Let's take a look at the Special Missions: Cobra Island version of Roadblock after the break... 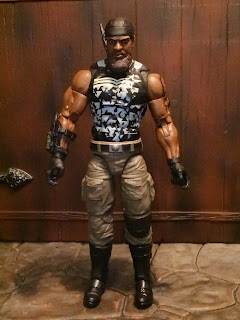 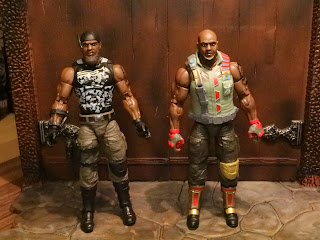 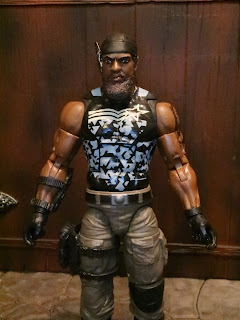 * Roadblock's color scheme is very different than the previous figure with his black and gray t-shirt almost giving him an urban camouflaged look. The color scheme works well and I do like the G.I. Joe star and stripes on the front of the shirt. Honestly, I just like the look of Roadblock in the shirt a bit more than the first figure as the proportions are a bit better. Like the previous Roadblock, this version of Marvin F. Hinton is sporting a tattoo of a lion on his left bicep and features a fantastic articulation scheme. It's even better than the original figure, too, as the vest doesn't impede his movement. 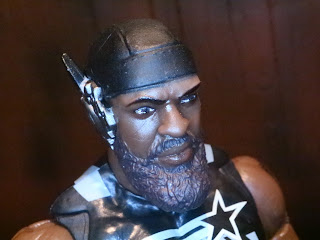 * I liked the headsculpt of the series 1 figure but this one is even better. He's sculpted with a bandanna on his head, an earpiece over his right ear, and a really cool beard. Looking at the headsculpt I think it's clear that this is the same person as the previous Roadblock although the folks though the beard definitely changes his appearance. 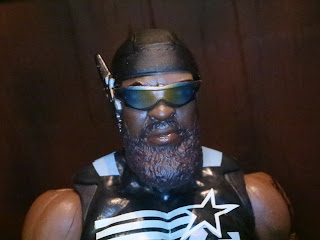 * To really change things up Roadblock comes with a pair of sunglasses. These fit perfectly over his eyes (there are little holes under his bandanna to slide the tips into) and they look fantastic on the figure. Heck, the lenses are even translucent yet polarized. 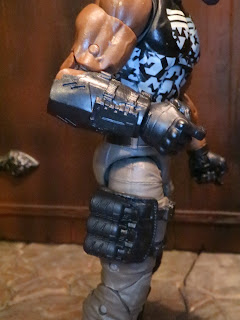 * Roadblock has two extra pieces of gear: A forearm pad with an extra magazine and a pack of grenades on his right hip. These are both included with the series 2 Gung Ho (who also reuses the larger Roadblock body) and make more sense with his weapons, as the magazine matches one of Gung Ho's firearms), but I like how they add to Roadblock's look. The grenades are especially a nice addition. 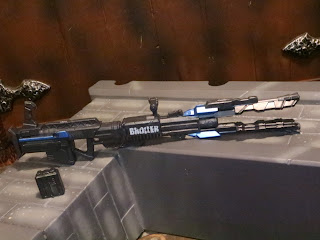 * Roadblocks' massive weapon is pretty cool looking as it appears to be a portable rail gun which Roadblock has nicknamed "Broiler". The detail is pretty solid on the weapon and he can hold it by the rear handle or by the trigger, which I imagine could be used for different firing modes.

* Roadblock's weapon has the same removable magazine or battery pack, too. It's a cool feature though it would have been really cool if the packaging included some information on Roadblock's specialty and the specifics of his gear. 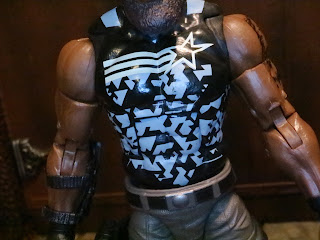 * Overall I really like the look of Roadblock's t-shirt but there are definitely some messy details on it that kill the crispness of the design. 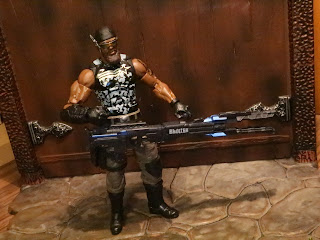 I wasn't expecting to prefer this variant to the first release but I actually do like him better. The headsculpt is excellent and the muted color palette is quite nice. Of the four figures in Target's Special Missions: Cobra Island set, Roadblock seems to be the easiest to find, probably because he's the only one that's not a new character. I really wish Hasbro would include file cards or something with the releases, though, as it'd be nice to learn a bit more about the intended story for this line and about the interesting weapons they're carrying. This is a Great and a 1/2 figure.


If you're a fan of Roadblock, AKA Marvin F. Hinton, then check out my review of the series 1 G.I. Joe Classified Series Roadblock.