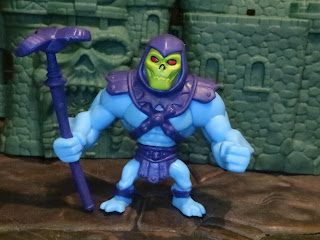 It's time for another review from Mattel's Masters of the Universe Eternia Minis line and this time I'm checking out Skeletor from series 1. Hasn't there already been a Skeletor figure in the minis? Kind of. Back in 2013 Mattel released a Masters of the Universe He-Man and Skeletor 2-pack as an SDCC exclusive but those figures were larger than the minis we have now. When the line fully launched in 2014 through MattyCollector Mattel shrunk the figures down to just a little over 2 inches but didn't release a standard Skeletor. They only released Battle Armor Skeletor. Well, now we finally have a standard Skeletor in the main MOTU minis scale. Let's check him out after the break and see if he's still as evil despite being a minute menace! 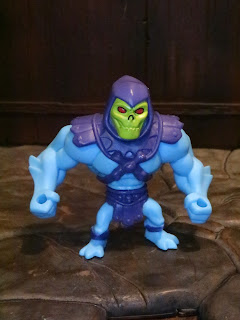 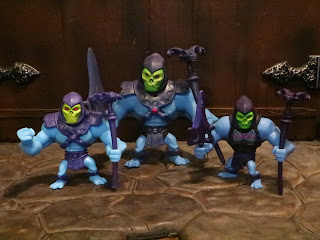 * On the left is the new Eternia Minis Skeletor, in the center is the original MOTU Minis Skeletor from SDCC 2013, and on the right is the MOTU Minis Battle Armor Skeletor from 2014. The arms and legs see the same on all figures (though the middle one is obviously larger) though the headsculpt looks different on the new figure. The paintwork is also less elaborate with fewer highlights and such. 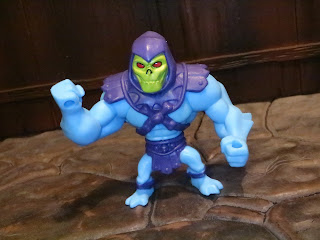 * Skeletor looks pretty cool overall. His color are very bright and bold, almost like the vintage toy or even the new MOTU Origins Skeletor. The sculpt is nice and looks good in this smaller scale, though is is a scaled down version of Skeletor from the 2013 SDCC 2-pack. 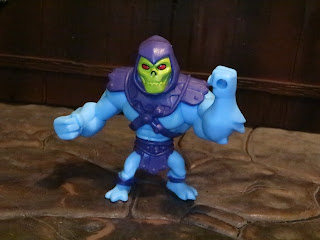 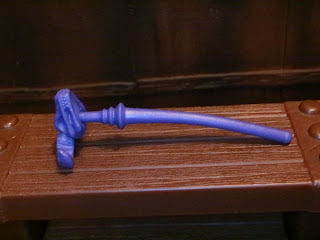 * Skeletor comes toting his Havoc Staff. It looks a little like the one from the MOTU Minis set from 2014 though the handle is a bit thicker. 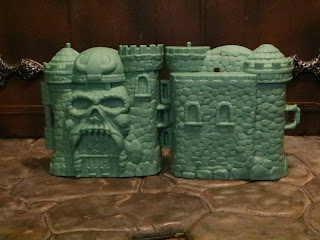 * The Eternia Minis come blind packaged but it's actually not a bad thing at all. First, there is actually a very prominent code on the bottom of the package identifying the figure inside (Skeletor is "B"), so you don't have to truly buy these without knowing what you're getting. Second, the packaging is a very cool plastic Castle Grayskull. It actually separates in half and you can connect them with other Grayskulls to make a long chain of castle faces. It's a cool sculpt and some of the best blind packaging I've ever seen. 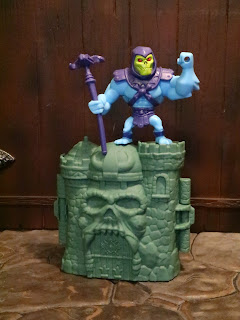 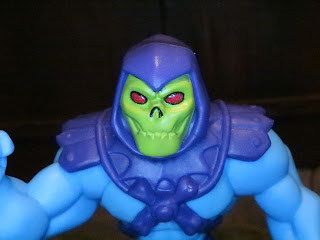 * Is there something a bit odd about Skeletor's face to you? He doesn't look all that Skeletal. I think some of it's the design style of the line (giving everyone big chins and massive underbites to make them look swole) but Skeletor loses some of his charm like this, I think. 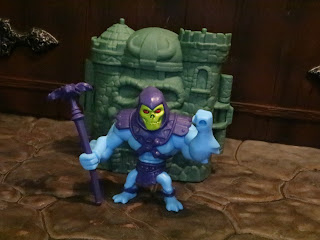 This is a pretty cool miniature rendition of Skeletor and while I'm not loving the headsculpt everything else about this little guy is on point. He's bright, menacing, and fits in well with the rest of the line. The MOTU Eternia Minis are really nice minifigures and I'm excited to have a standard Skeletor in the series. Oddly enough, this exact figure is part of the Snake Mountain themed series 2 as well. This is a Great mini and well worth hunting down.