The Revenge of 31 Days of Toy Terror: Goblin from Hellboy 2: The Golden Army by Mezco 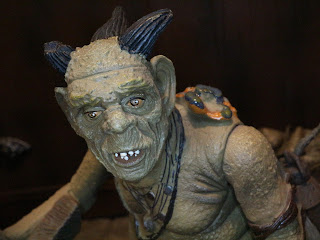 Throughout the 2000s Mezco put out some great product for both Hellboy films and the comic series. Today I'm checking out the Goblin from the second series of Hellboy 2: The Golden Army action figures. Back in 2014: The Year There Were Only 24 Days of Toy Terror I reviewed the Angel of Death from Mezco's Hellboy 2 action figure line, a great toyline based on the 2008 film by Guillermo del Toro. Sadly, del Toro never got the opportunity to direct a third film in the series to complete the trilogy but we are getting a new film in January of next year that seems like it could be pretty good. Hopefully we'll get some cool toys with the film as it has been a long time since we received a robust Hellboy toyline. Mezco did a nice job of putting out a great mix of main characters and variants along with some cool side characters like the Goblin, the builder of the 4,900 soldiers in the titular Golden Army. He's not really a terrifying creature, more sympathetic really, but being a goblin still gets you a slot in The Revenge of 31 Days of Toy Terror.  Let's check him out after the break... 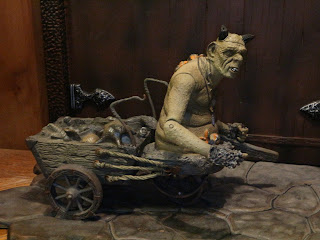 Accessories: 2 lanterns, 2 buckets, and a crutch 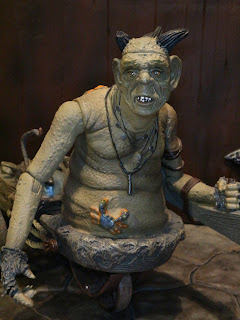 
* The Goblin is a really cool looking character that looks like he popped right off of the screen. Mezco did a wonderful job with this line and the realistic, detailed sculpting still holds up really well today. Considering that the Goblin is missing the lower half of his body and thus rolls around on a bizarre cart like device, he also will still stand out in your collection, too. 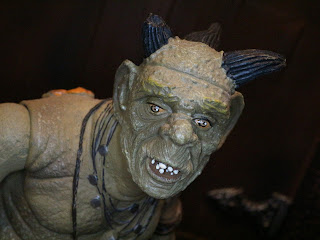 * The headsculpt is excellent and features lots of warts and such. The Goblin's weary eyes, crooked teeth, and sideways stare really add a level of humanity to the character's monstrous visage. 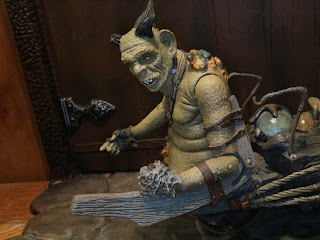 * The Goblin's body isn't super articulated but he does feature some decent points in the arms and an incredible double balljointed head. The left "crutch" that the Goblin uses to move his wheeled cart is not removable from the figure's arm and is actually given a joint of its own. 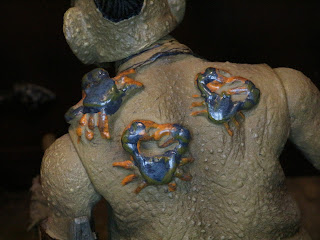 * The Goblin has crabs!!! No, really, the Goblin is covered with crabs. This kind of reminds me of the kind of detail you might find on an old school Playmates Teenage Mutant Ninja Turtles figure except that the crabs are better painted. 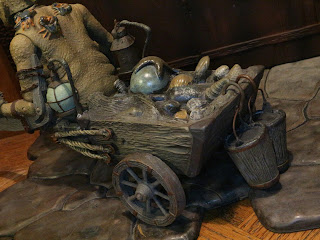 * The Goblin's cart is loaded with all kinds of crazy stuff that he has been hauling around for centuries. All of the accessories can attach onto the cart and be carried around easily by the figure. 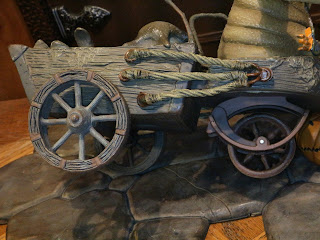 * The wheels on the cart freely spin, allowing you to actually let the Goblin roll around your toy shelf. 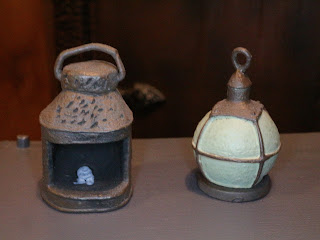 * To light his path the Goblin includes two lanterns, both being unique sculpts. They're quite cool and look very old and very weathered. 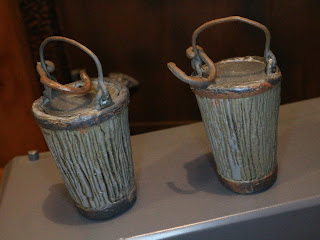 * The Goblin also carries two buckets with lids on top. The sides really look like aged wood and feature handles with moving hooks on them. What's he hauling in there? Goblin juice? 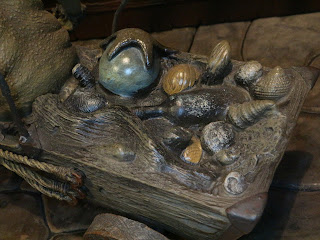 * The cart is also loaded with lots of other junk, much of which seems to have been pulled from the sea. I see seashells, starfish, a bottle, and some driftwood along with some other mysterious and unknown items. 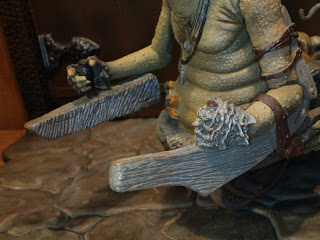 * While the wooden beam on his left arm, which the Goblin uses to propel himself, is not removable, the one on his right is. It also has been given the texture of aged wood and looks fantastic. 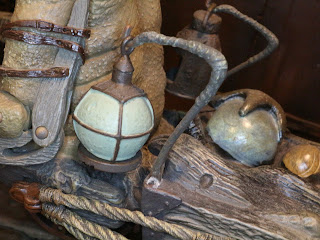 * The hooks that hold the lanterns on them do seem a bit delicate and are pretty close to the Goblin's body, meaning it can be a bit tough to get the lanterns on. Be careful when moving them! 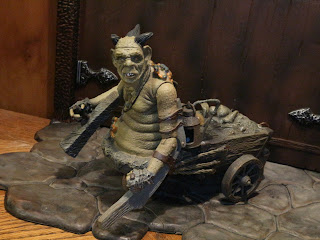 While the Goblin wasn't the most popular character in the film nor the most exciting figure Mezco released for Hellboy 2, he's a really good looking action figure. Looking back a decade after his release there is something extremely cool about how the figure was designed and executed. I think in 2008 I would have rated this figure a bit lower but now, looking at it on its own due to his unique style and sculpting details, I'm giving him an Epic. He is well worth tracking down as a very unique horror inspired figure that will go really well with the Guillermo del Toro inspired action figure line from NECA that is supposed to feature characters from many of the director's finest films.


This is the only figure of the Goblin that I've reviewed. For more Hellboy 2: The Golden Army action figures from Mezco, check out the following:
The Angel of Death
Posted by Barbecue17 at 10/12/2018