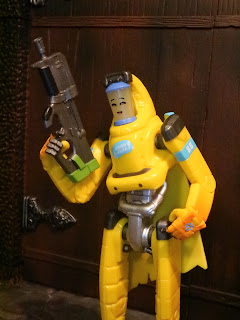 It's time for another review from Jazwares' Fortnite: Legendary series and this time we're getting a rather interesting variant of a previously released figure. Meet P-1000, the upgraded form of Peely! From what I've gathered through looking at the Fortnite wiki, P-1000 was created when Jonesy turned Peely into a smoothie and then built him a robotic body. Wow! That's incredibly weird, isn't it? I like that the Fortnite line gives us some very fun, random, and wacky toys, although I have to admit that P-1000 has some real problems. Let's check out P-1000 after the break and see why there are a few bad spots on this banana.... 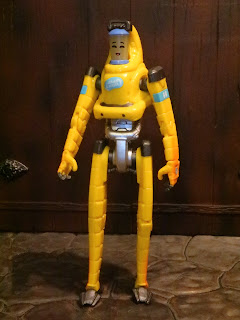 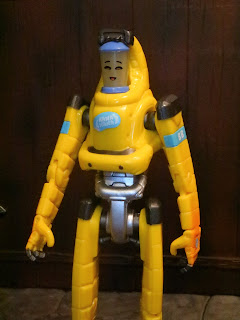 * The Fortnite: Legendary Series is no stranger to unusual looking figures and P-1000 might just be one of the most unusual of them all. He appears to be a robotic designed to look like a banana. His limbs slender, yellow, and segmented to give off a bit of an organic vibe despite appearing to be part of his robotic frame. The paintwork is decent as P-1000 features some stickers and an interesting paintjob togive him a bit of a browning appearance. 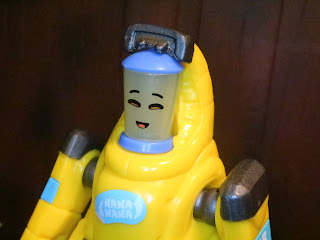 * Rather than a standard head or a face, Peely has a clear smoothie container like you'd see in a blender. Yup. That's absolutely what this is! There are four different containers, each with a different face, and they pop into the kitchen device that is where his head should be. The first head is a very happy face with closed eyes, and open mouth, and prevalent eyebrows. 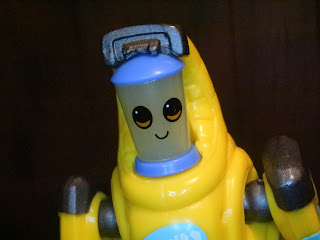 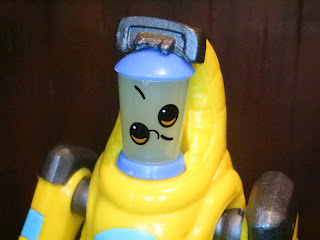 * The third face is all swirled up, presumably just after Jonesy got through with putting Peely in the blender. There are two eyes, two eyebrows, and a mouth, but they're all mixed together. I do like the translucent look of the container. It does look like a blended fruit drink of some sort. 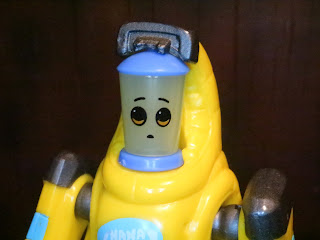 * Last up is a worried looking face. I imagine this is what Peely looked like before he got blended, or maybe when Jonesy say he's feeling thirsty. 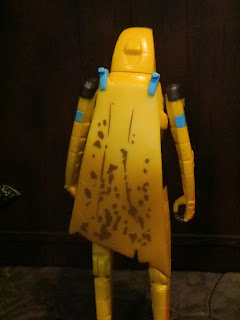 * P-1000's back blind is a cape. I wonder if it's supposed to actually be made out of Peely's original peel? It's very cool as it has some nicks and tears in it as well as lots of brown spots, showing its age. 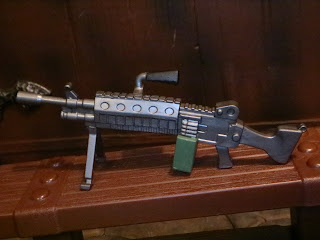 * Peely comes packing the Light Machine Gun, a SAW that looks based on the M249 machine gun. It's stylized, of course, but it's nicely detailed. There are little rounds of ammunition sculpted entering the gun from the ammo box and the overall weapon has a nice, realistic paintjob. I wish all of the G.I. Joe Classified Series weapons had this level of paintwork. 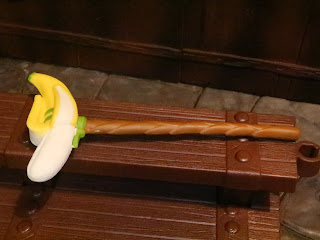 * P-1000's Harvesting Tool/ melee weapon is a banana on a stick. I can't find the official name of the weapon but it definitely has a good sculpt and nice paintwork. I'm not a huge fan of these bizarre weapons but I have to admire the detail and effort Jazwares puts into them. 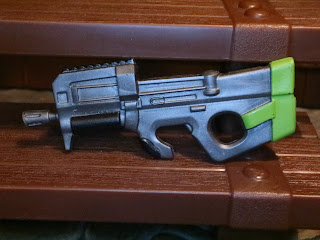 * Like Ruin, P-1000 comes with the Epic and Legendary version of the standard Submachine Gun from the game. This looks like a very modified version of the FN P90 with a cool new paintjob. I've commented before that there's something about the design of these weapons that remind me of the weapon models from GoldenEye 007 on Nintendo 64, so here's a good old RC-P90 for you! 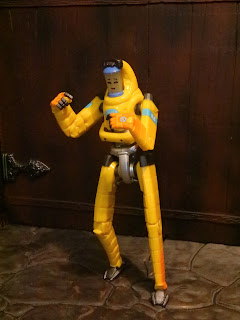 * While the Fortnite: Legendary Series figures generally have excellent articulation, P-1000 is very disappointing. He's clearly built differently than most other figures to capture the robotic nature of the character but the overall articulation is woefully lacking. There's really very little you can do with this guy, sadly. 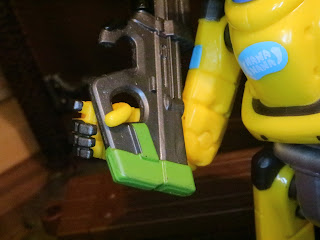 * Most of the Fortnite: Legendary Series figures have hinged finger joints that are a but frustrating to use but P-1000 can't use any of his included accessories. Every weapon he comes with easily slips out of his hands. Please, Jazwares! Just give these figures regular sculpted hands! The hing joints add nothing to these guys! 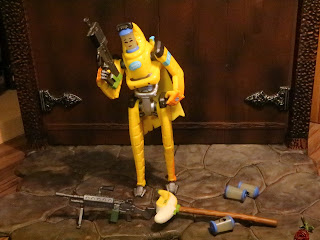 I was quite excited about P-1000 but getting him in hand caused me to realize that he's quite a disappointment. P-1000 has neat accessories, a really cool design, and the fantastic swappable heads/ smoothie containers gimmick, but the inability to hold his weapons and his limited articulation is just a real downer. There have been a few figures like this lately and it really makes the line less exciting. If Jazwares could just get these figures to use sculpted hands I think most of the other issues would resolve themselves. P-1000 is still a Good and a 1/2 figure, but weird design decisions are what keeps him away from greatness.
If you're a fan of Peely also check out my review of the standard Fortnite: Legendary Series Peely.
For more figures from the Fortnite: Legendary Series check out the following:
Abstrakt
Beef Boss
Crackshot
DJ Yonder
Doggo
Drift
Enforcer
Eternal Voyager
Fishstick
Galaxy
Havoc
Jonesy
Leviathan
Molten Battle Hound
Omega: Max Level (Purple)
Peely
Rabbit Raider
Ragnarok: Max Level
Raven
Ruin
Rust Lord
Sentinel
Skull Trooper
Skull Trooper (Purple Glow)
Tomatohead
Valkyrie
The Visitor
Wild Card
X-Lord (Scavenger)