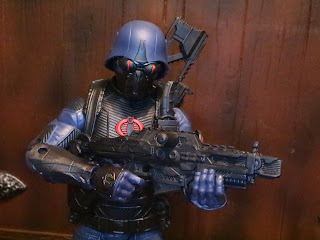 Have you heard about the utter disaster that has been the launch of the Target exclusive G.I. Joe Classified figures? Of course you have! It's all most collectors of the G.I. Joe line have talked about throughout August and Target and Hasbro still don't seem to have things under control. While I still haven't been able to get Beachhead or the Baroness yet I did manage to grab the Cobra Island Roadblock and the Cobra Trooper last month, so I'm 50% of the way through completing the set. Today I'm checking out the Cobra Trooper who takes the award for being the first army builder in the line. Let me tell you up front that the Cobra Trooper is an incredible action figure. He is definitely one of the best in the series yet and while I have no doubt that Hasbro will release this guy multiple times in different colors it's still a shame he's not widely and easily available. The Cobra Troopers were part of the original series of 1982 G.I. Joe figures and they've been a steady presence in the line ever since (even if I like the Vipers better). Let's take a look at the Cobra Trooper after the break... 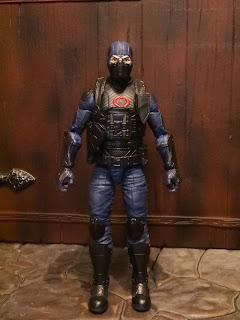 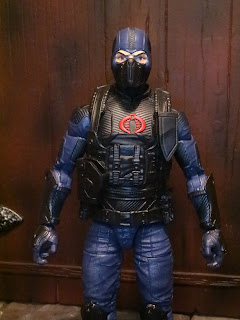 * The Cobra Trooper is awesome. I love the design of this guy as he takes the general idea of the original Cobra Trooper and modernizes it with more sophisticated tactical gear. The Cobra Trooper's outfit is incredibly detailed with great work on the texturing on his pants and shirt. There are lots of cool little armored patches on the shirt along with armored plated forearm guards. With his tactical vest he really reminds me of the awesome Cobra Shock Trooper from the 2011 Pursuit of Cobra series. The vest isn't removable but it is a separate piece that sets over the torso. It inhibits the movement of the torso but it looks so darn cool I'm not at all upset. 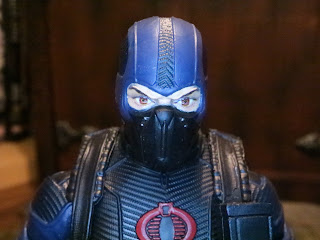 * The headsculpt is wicked fierce. Well, at least the Cobra Trooper's eyes are fierce. Most of his head is covered by a balaclava with an armored face mask that probably serves as a filter as well. Seriously, if Cobra can wear a mask you can too! 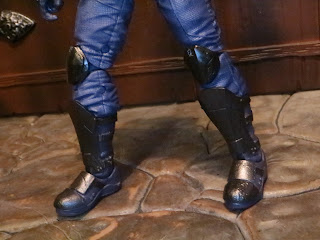 * The Cobra Trooper is really equipped nicely. I love the armored plating over his boots and shins and his sleek, angular knee pads. He's both looking sharp and geared up for battle. 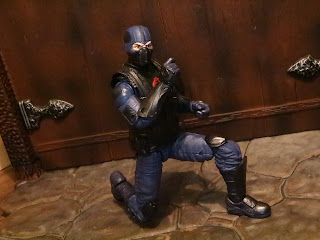 * The articulation on this series has been killer all around and the Cobra Trooper is one of the best. He moves really well with my only qualms being that the position of his chest holster interferes with his arm movement. Overall, though, he's a joy to play with. I probably pick him up and fiddle around with him more than any other Classified Series figure I've picked up thus far. 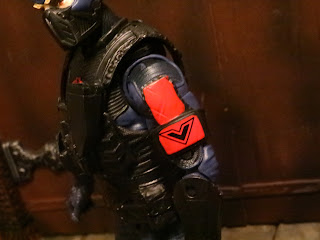 * The Cobra Trooper is loaded with accessories, the first of which is presumably a rank designation of some sort, perhaps a squad leader designation? It's a red and black plastic piece that slides over the arm and rests snugly on the shoulder. It looks pretty cool, both giving the figure a bit more color and an option for customization if you army build. 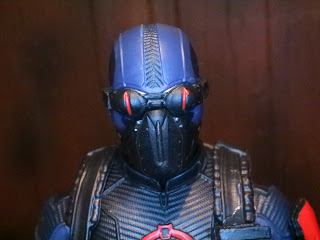 * There are actually quite a few accessories for the Cobra Trooper that allow you to modify his appearance. Another one is a pair of goggles that can fit over his eyes. They look great and give the figure a very creepy appearance due to the snake-like red slits on the lenses. 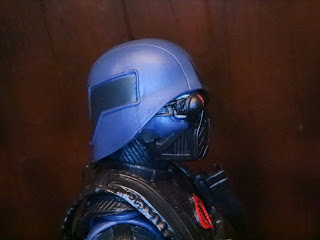 * The Cobra Trooper also comes with the classic blue Cobra helmet. It's a bit more detailed than any previous version but it looks just like you'd expect. It also fits very securely on the trooper's head. I love the the Cobra Trooper looks great both with or without the helmet. 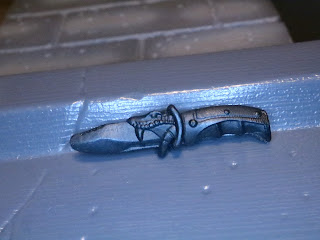 * The Cobra Trooper's knife is also incredible. I love how the blade looks like it is coming out of the mouth of the snake adorning the hilt. You just know Cobra Commander loves stuff like that. 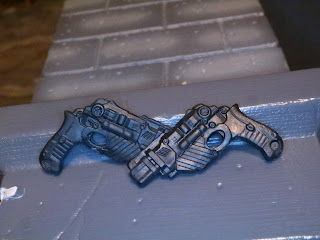 * The Cobra Trooper has two holsters on his tactical vest, one in the front and one in the rear, so he includes two pistols to stock them with. These are pretty cool looking pistols. They're still a bit futuristic but they don't look too far out even though they appear to be modeled on the Nerf Vortex Proton blasters. The detail is crisp and they look excellent with the figure. 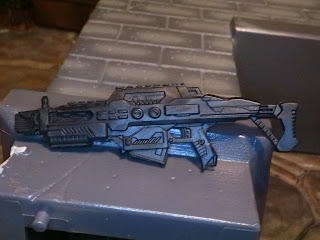 * The Cobra Trooper comes with four firearms overall and the third is what looks like an assault rifle. This is probably my favorite of his weapons. It actually seems to be modeled after the Nerf Rapidstrike. 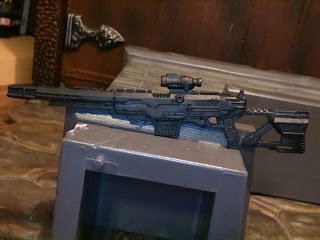 * Last but not least is a sniper rifle. The original Cobra Trooper and the 25th Anniversary Cobra Troopers came with Dragunov sniper rifles but this guy gets something far more modern. It's based on the Nerf Longstrike and it looks fantastic. I love the details such as the scope, the magazine, and the tactical stock. 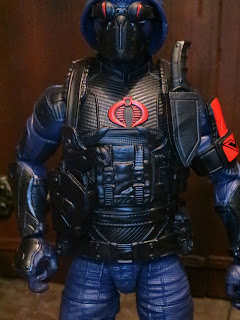 * The Cobra Trooper accomplishes one of my favorite action figure feats: He can carry all of his weapons and still have his hands free! One of his pistols fits in the holster on his right and the snake knife fits in the sheathe on his left shoulder. 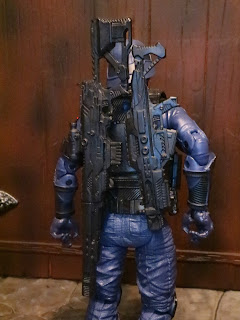 * The second pistol fits in the holster on the Cobra Trooper's left lower back while the two rifles plug into two ports on his back. Voila! Pretty cool, right? 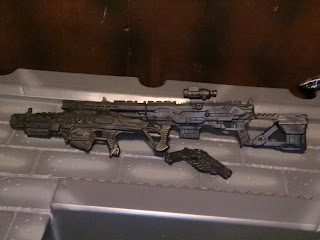 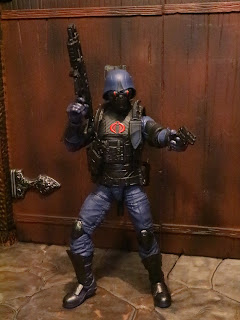 The Cobra Trooper might be my favorite figure in this line so far. He's awesome. Even if I weren't collecting this series I imagine the Cobra Trooper would still be one of those figure that I'd pick up just because of how cool he is. The accessories are top notch and the fact that you can stow them all on him while leaving his hands free is a huge plus. This guy is confirmed Epic and well worth tracking down.

It's a darn shame that the Target exclusive Cobra Island figures have been so hard to come by, though. Usually I feel like Target is pretty good with their exclusives but this launch was a mess. Both Hasbro and Target kept switching up advertised release dates, the online sales were over in seconds, and the figures were often register locked for a street date both Hasbro and Target denied. They're awesome toys but it'd be nice if they were easier to get.