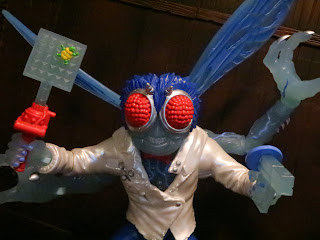 Ready for some more Turtle Power? How about a new Teenage Mutant Ninja Turtles line? Then let's get ready for Super7's Teenage Mutant Ninja Turtles Ultimates line, a new 6-7 inch scaled line of action figures based on the vintage Playmates Teenage Mutant Ninja Turtles line. Yes, these figures aren't based on a current piece of media, the comics, or the classic films; they're based on the 1988 Playmates toys that most of us had as kids. If you're at all familiar with Mattel and Super7's Masters of the Universe Classics or Thundercats figures then you might have an idea of what to expect as these follow a similar pattern: Larger, more detailed, and more articulated versions of the vintage figures. These are meant to punch you right in the nostalgia and they succeed in that for sure. The first full series has already arrived (mine showed up today) but a month or so ago I managed to be on Super7's website at the right time to order this cool exclusive Glow-in-the-Dark Baxter Stockman. Baxter Stockman was intended to be the SDCC 2020 exclusive but due to Covid-19 he was sold directly through Super7, meaning I actually had a chance to get him. He's a cool, glow in the dark bug and since I was eager to get my hands on this line and see how it turned out I ordered him. Ready for a look at this "Bug Zapper Blue" Baxter Stockman? Then join me after the break... 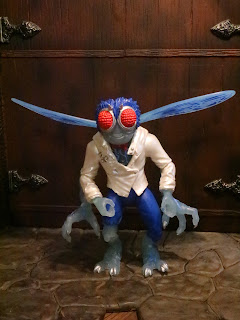 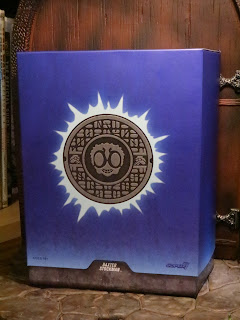 * Super7 consistently has some of the nicest packaging in the action figure industry and it looks like the TMNT Ultimates line is going to be another win for them. Each figure comes in a window box with a cardboard sleeve over it. Baxter's is a blue sleeve adorned with a manhole cover with his face on top. There are actually little mousers on the side as well, which is pretty cool. The splash behind the manhole and the details on the manhole all glow in the dark. 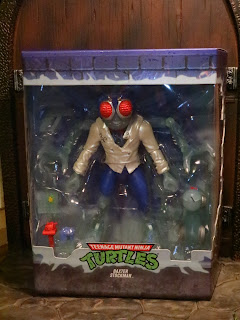 * And here's the window box. I'm not sure I'd call this truly collector friendly packaging but you don't have to really destroy anything to get him out. There's a brief bio on the back, too. 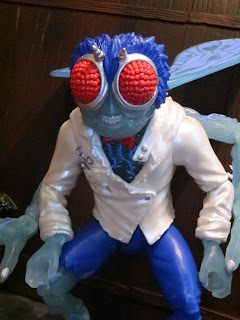 * Here's Baxter! Based on the vintage toy of Baxter Stockman Super7 delivered an incredible update of the series 2 figure except now he glows in the dark! I'll be reviewing the standard Baxter Stockman in the coming month or so but this one really stands out due to his body being molded in a translucent, blue glow in the dark plastic. It gives him a very cool look, as if he was trapped in some sort of science equipment. It's a very nice glow and while not as strong as some toys, it's better than others. Plus, Baxter glows for a long time. I actually kept him on my bedside table for the first week or so that I had him (my wife was thrilled). Bug zapper Baxter also has a pearlescent sheen to his lab coat that nicely accents his glow. 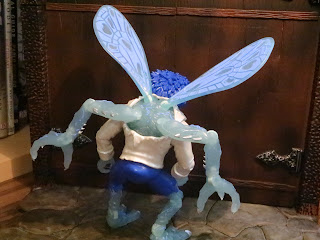 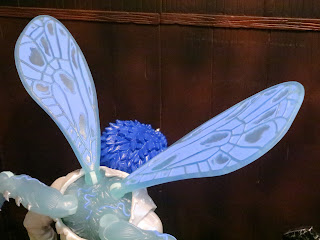 * Baxter's wings are really cool. They're see through (thanks to the glow in the dark plastic) and they have a really nice design. They're also articulated at the bottom so you can move them around for different poses. 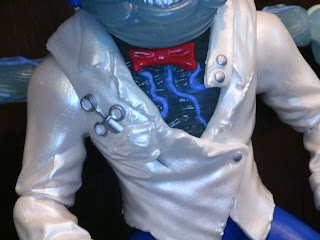 * Up close you can see some cool smaller details like the syringe Baxter keeps in his lab coat pocket (that can't be safe, can it?) and the weird glowing veins running down his body. The lab coat is a separate piece of plastic that fits over his torso, by the way. It's not removable, though. 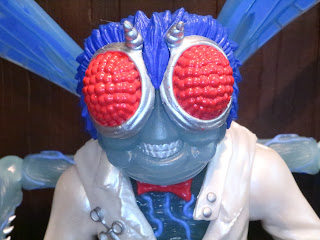 * His headsculpt is amazing! I love how crazy he looks. Baxter has some seriously large, compound eyes and a very sinister grin. Yikes! 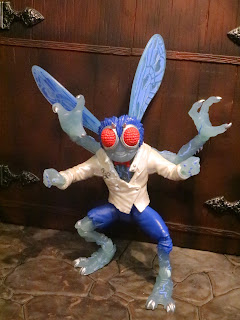 * The articulation on these figures is pretty solid and really does remind me of Super7's other Ultimates lines Masters of the Universe Classics or Conan the Barbarian. The figures are kind of squat and chunky, like the original 1980s and early 1990s Playmates figures, but they're definitely more modern feeling. The feel like TMNT figures, though, and that's a good think. They're very sturdy and most of the joints are either swivel/hinge joints or true ball joints. You can definitely get plenty of poses out of Baxter, although if you're looking for very fine and subtle posing these don't quite hit that mark. They're truly toys and feel like it. 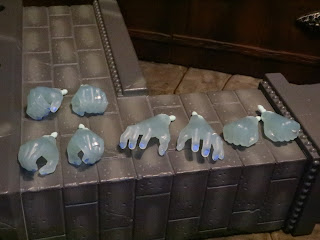 * Baxter Stockman comes with 4 pairs of hands that you can swap around. You get 2 fists, 2 pistol grips, 2 open hands, and 2 regular grips. The fingernails get a paint application and Baxter is wearing a silver band on his left ring finger. 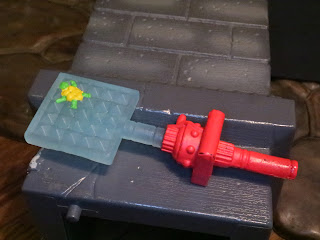 * When it comes time to deal with a turtle menace Baxter is wielding a handy, dandy.. flyswatter? Yup! The vintage Baxter had one too but this one has a glowing grid (maybe it's an electric flyswatter, which is a real thing) complete with a little turtle. Remember that detail on the vintage toy? Well it's here, but now it's painted. Awww.. that's actually kind of depressing, really. 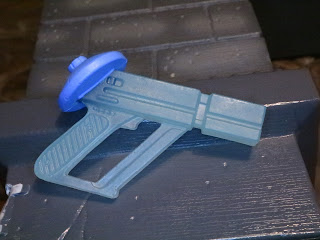 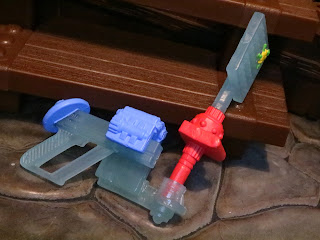 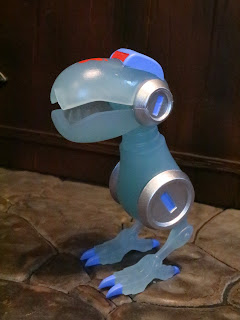 * Baxter Stockman also comes with one of the coolest accessories this year: A Mouser! The Mouser is quite nice with awesome sculpting, multiple paint applications, and glow-in-the-dark plastic. That's right: The Mouser glows, too! This is a really cool bonus and definitely makes Baxter really feel like he's loaded with extras. 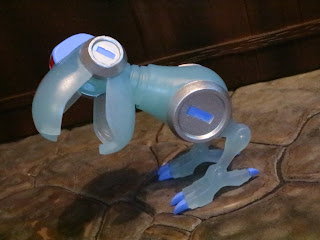 * The Mouser is also articulated. He has swivel hips, a swivel head, and a hinged jaw. I'd love to have a small army of these little fellows. I wonder if Super7 will ever sell them as a group like Playmates did? 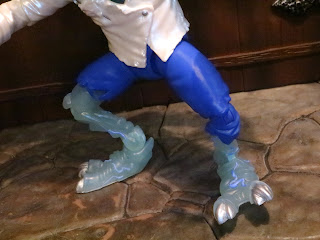 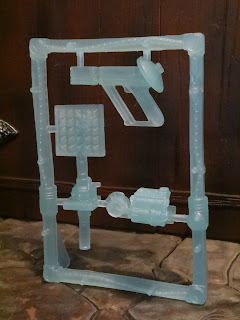 * To really hammer home the vintage inspiration of this line Super7 is including a plastic weapons rack of unpainted weapons with each figure so far. On one hand, there is something interesting about the inclusion of this but on the other hand it just seems like a waste. These are the same weapons Baxter comes with but unpainted and attached to the sprues of the rack. Getting them off seems like it would take some effort and you'd have to trim off the flashing with a hobby knife or something. Honestly, it just seems like a very pointless inclusion. The vintage Baxter Stockman also didn't have weapons on a rack like this, so it's not even a nostalgia thing. 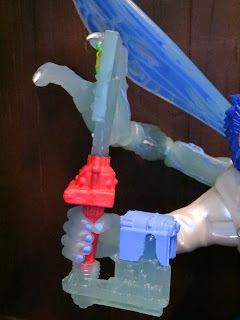 * My last negative has to do with Baxter's flyswatter. I showed above how the piece that attaches to the bottom of the flyswatter also attached to Baxter's ray gun. That's a cool feature but, oddly enough, that's not how the vintage toy's accessories worked. On the vintage toy the device on the bottom actually fit over Baxter's wrist, acting more as some sort of control device for his flyswatter. I wonder why Super7 changed it? It seems like a weird choice to change to make to the figure. 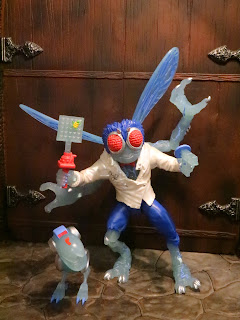 I was anxious to see how Super7's Teenage Mutant Ninja Turtles Ultimates line turned out and I'm quite pleased. Yes, these figures are about twice the price of a standard action figure but they're rather bulky and come with a nice assortment of accessories. This SDCC 2020 Baxter Stockman is a Great figure and a rather nice variant of the popular fly guy. The inclusion of the Mouser really helps, too, as it essentially adds a second character to the mix. If they play their cards right Super7 could really have a line with some longevity to it as the vintage line was filled with wonderfully wacky characters. The Turtles are always popular and really seem to have experienced a huge resurgence in popularity among fans who grew up with the originals. Heck, when have the TMNT not been popular since their debut? They're a brand that seems to stay almost perennially popular! I should be receiving the series 1 figures, soon, so stay tuned!