Minifigure Review: Jitsu from Masters of the Universe Eternia Minis by Mattel 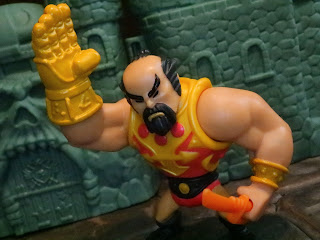 Today we're checking out Jitsu, who is part of the first series of Eternia Minis. He was originally slated to be packed alongside of Mekaneck for the 2015 series of the Matty Collector Masters of the Universe Minis but those were cancelled due to a lack of subscriptions. While these new MOTU Eternia Minis have fewer paint application and, often, fewer weapons, it's still nice to see these sculpts rescued from oblivion and delivered to collectors in a cost-efficient way.  Jitsu doesn't show up in Masters of the Universe product all that often so it's always exciting to get a new toy of him! In fact, I believe this is the first figure of Jitsu that I've reviewed on the site. Jitsu, the Evil Master of Martial Arts. Let's dive in to take a look at him after the break... 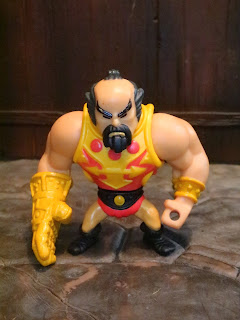 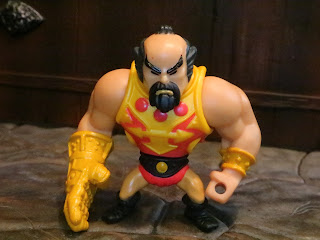 * Jitsu is really cool. He fits the aesthetic of this line really well and looks ready for battle. The paintwork is clean (though his usual gold is swapped for yellow here) and his armor is nicely detailed. 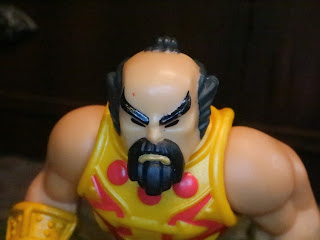 * The headsculpt is pretty cool, too. It's very stylized but the sculpt captures Jitsu's distinctive hairdo and facial hair quite well. 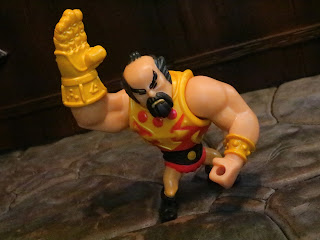 *   These little guys have four points of articulation which may not seem like a lot except you gotta consider they're only a little over 2 inches tall. That's not bad for that scale! They're very durable little figures and would probably fit in well with lines like Imaginext and the Hasbro Heroes figures, so if you have a little one who's into MOTU these could be some decent starter toys. They're fun to play with and have a lot of shelf presence! 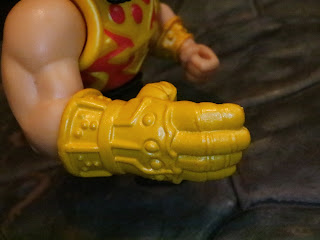 * Jitsu's metal hand looks pretty cool. It has a mixture of details that make it look like a metal gauntlet and like a device with some sort of technological features. The circles on the knuckles kind of make it look like the Infinity Gauntlet, don't they? 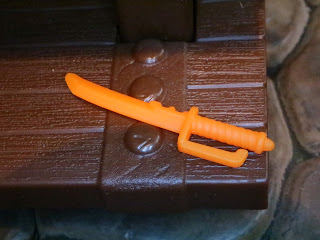 * Jitsu comes armed with his orange katana. It's a small accessory but it fits the figure well. Besides, he only has one free hand. You'll be pleased to know that the handguard is on the correct side on this one, unlike the vintage toy where it was incorrectly placed. 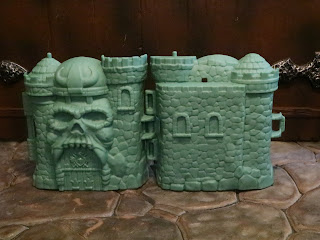 * The Eternia Minis come blind packaged but it's actually not a bad thing at all. First, there is a very prominent code on the bottom of the package identifying the figure inside (Jitsu is "F"), so you don't have to buy these without knowing what you're getting. Second, the packaging is a very cool plastic Castle Grayskull. It actually separates in half and you can connect them with other Grayskulls to make a long chain of castle faces. It's a cool sculpt and some of the best blind packaging I've ever seen. 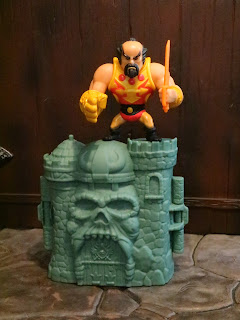 * Furthermore, the Castle Grayskull container functions as a really cool display stand. There are two pegs on top that can plug into either of the figure's feet. When you connect a row of these together you can have a long display stand for multiple figures. 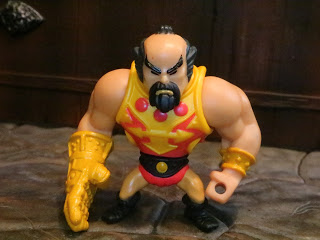 * The 2015 release of Jitsu that was intended to be sold through Matty Collector (but was never released) was depicted with gold highlights on his armor rather than the yellow that comes on this toy. This doesn't look terrible but gold would have looked so much nicer! 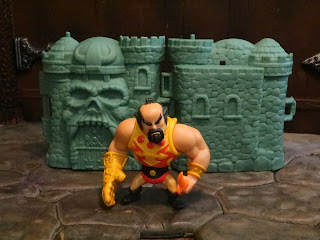 Jitsu is a Great and a 1/2 mini and probably one of the most desirable in the set since he's a new Evil Warrior not released in the previous line of minis. Yeah, gold would have been preferable to yellow, but you can just pretend this figure is inspired by Jitsu's Filmation appearance (where he was known as Chopper). Jitsu's a cool bad guy and his presence makes me really hope that we'll see a Fisto at some point. Those two were made to battle each other! I've been seeing series 1 quite frequently, so I'm hoping you're having good luck finding your set!

This is actually the first figure of Jitsu I've reviewed on the site.