Action Figure Review: Skeletor from Masters of the Universe Origins by Mattel 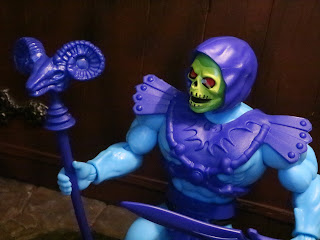 It took me a long time but I finally stumbled upon the Masters of the Universe Origins figures themselves! I've now found all of the first series and, to get things started with the single carded figures, let's check out the Evil Lord of Destruction himself: Skeletor! It's interesting to finally have these in hands, although it's a bit anticlimactic since we've kind of been getting these figures for over a year now. Mattel first released Origins last year as an SDCC 2019 2-pack of He-Man and Prince Adam. Like the vintage line and Masters of the Universe Classics, Origins relies heavily on body reuse for most characters, though Mattel took things a step further and "pre-used" the Origins bodies for the Masters of the WWE Universe line. I guess what I'm saying is that these don' feel as "new" as a new toyline usually feels, although I am very excited to finally have Skeletor and other real MOTU characters in this style. Skeletor is one of the premiere villains of the 1980s and one of my favorite characters overall and it's always nice to see a new toy of him. Originally Origins seemed to be heavily inspired by the earliest MOTU minicomics but now things seem a bit all over the place as Orko is very Filmation inspired, Man-At-Arms has his mustache, and upcoming figures like Clamp Champ, Kronis, and Keldor obviously take cues from the 200x line and MOTUC. Still, Skeletor feels very vintage and very true to his roots. Don't be a royal boob! Check him out after the break... 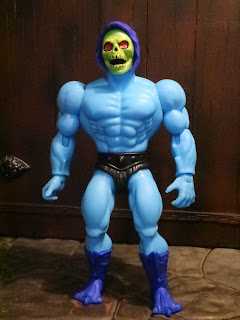 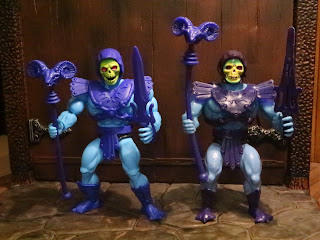 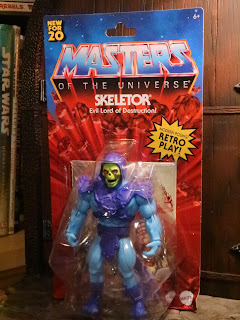 * Here's a quick shot of the figure on the card. Mattel went with a card that really pays homage to the vintage line and it really makes the figures stand out on toy shelves. These are currently Walmart exclusives (though it looks like Amazon will start carrying them in November with other retailers to follow shortly) and Walmart has been getting over-sized display cases of these, too. It's pretty amazing to see these sitting on toy shelves and hanging from pegs again.

The Positives:
* Well, here's Skeletor! The Origins line has a very vintage look and feel to the even though they have most of the same joints that you would expect from a modern action figure. What can I say about Skeletor? he's much brighter than the vintage figure, almost as if Mattel took a cue from the Filmation Skeletor, but I like it. I've always loved how bright and bold the colors of MOTU are and Origins really doubles down on that. Skeletor's armor and belt are nicely recreated here and they definitely feel more sturdy than the armor of the vintage toy. They're both removable as well. Skeletor has always been an extremely strong character design and that still holds true nearly 40 years later. 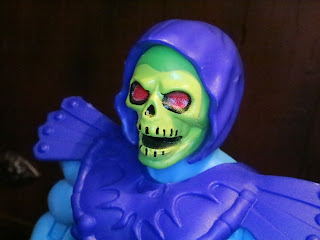 * I'm very mixed on Skeletor's headsculpt, particularly because of the open mouth. I like the sculpt of the hood, the multiple colors used, and the red eyes. It's clearly recognizable as Skeletor and there are some parts of the head that are very nicely done. Mattel was clearly going for a more minicomic inspired look for Skeletor and they were about...60% successful, I'd say. Maybe 70%. The head has a great range of motion as well. 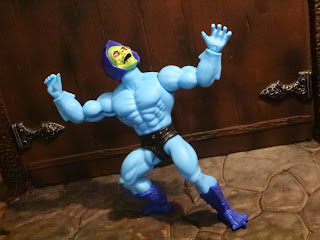 * The MOTU Origins line has figures built like the vintage toys but with modern articulation. While their bulky frames make the articulation a bit clumsy, they do feel like an evolution of the vintage line. Imagine what you would get if you mixed a vintage figure with a MOTUC figure. They're quite fun to play with.
* They're also modular. Like the Masters of the WWE universe figures, these can be easily separated to make your own lazy boy customs!

* Skeletor just has to have his Havoc staff with him, doesn't he? The Origins comes with a Havoc Staff that is very, very similar to the vintage toy. Not identical, mind you, but I could easily see someone who didn't have a comparison reference confusing the two. If you like the vintage Havoc Staff then this one ought to be a winner in your book, too. 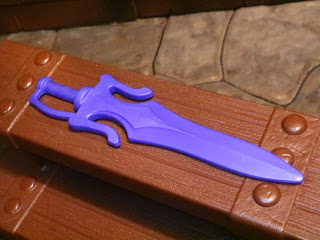 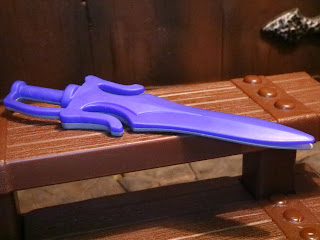 * Skeletor and He-Man each come with half of the Power Sword and they can snap together, just like the vintage toys could. 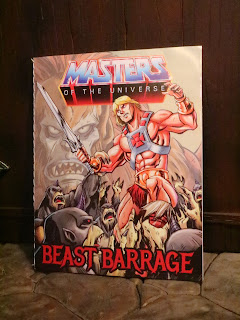 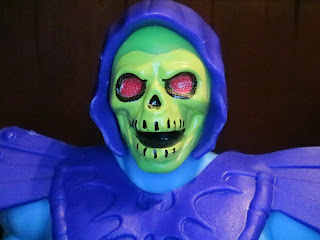 The Negatives:
* I am not liking Skeletor's open mouth. It might work on the Filmation Skeletor (OK, it totally works on the Filmation Skeletor) but on the vintage figure it looks really strange. I think it's the teeth that just don't look good. They really don't look like teeth; just random lines. I've seen a couple collectors use hot water or heat to soften the head up and close the mouth, so try that. It definitely looks better. 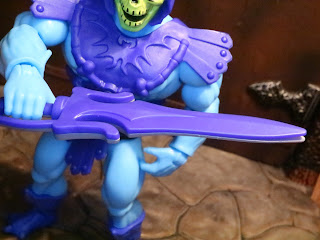 * Like the vintage toys, the swords don't fit together perfectly. They're loose at the ends. 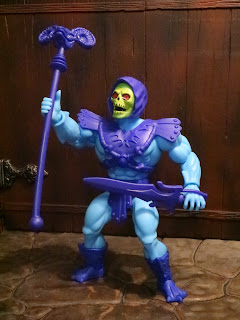 Other than the open mouth, which looks better at a distance or from the side, I'm really quite happy with the Masters of the Universe Origins Skeletor. It's a nice update of the vintage toy that's still in that same scale and style but it does have enough changes to make it feel like more than the vintage toy remade. The bolder colors, the sturdier armor, and the Alcala inspired sword all give this figure some newness I do still want this line to find it's own unique feel and tone, though, and Skeletor really doesn't get us there. He's still a Great and a 1/2 figure, but I'm really curious to see what Origins becomes. He-Man/ New Adventures, 200x, and Masters of the Universe Classics all had their own unique feels and strengths and I'm hoping that Origins gets there, too. The upcoming deluxe figures give me some real optimism that Mattel is going to be able to take the line and give it it's own feel in the future. I hope so as I'd love to see Origins forge it's own unique identity rather than be the vintage line 2.0.
Skeletor/ Keldor is one of my favorite villains of all time and now he has his own review archive! Check out Snake Mountain for all of my reviews of the Evil Lord of Destruction who, by his own admission, "Is not nice!"
For more Masters of the Universe Origins check out the following
Battle Cat
He-Man and Prince Adam 2-Pack
Prince Adam & Sky Sled