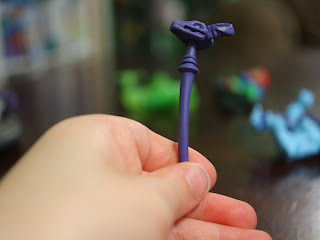 September is here! Fall is getting closer and, of course, I'm guessing that many of us are already starting are Halloween festivities. Heck, we've had decorations up at my house for about a month! So, what's new this week?

Well, I've finally found some more of the new Masters of the Universe product from Mattel! I've now found He-Man and Skeletor from MOTU Origins (reviews coming soon) as well as the complete first series of MOTU Eternia Minis. I've already reviewed Buzz-Off and the rest will be coming shortly. By the way, my daughter took that picture of the Havoc Staff from Skeletor. She likes to photograph these little guys with my camera. 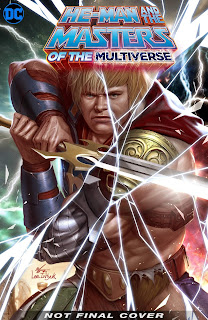 I'm currently in the middle of reading Stephen King's The Tommyknockers but I took an hour or so off the other night to read the trade paperback release of DC's He-Man and the Masters of the Multiverse. I tried to keep up with the series and picked up the first three issues as they were released but Covid-19 took a big hit on my local comic shop, so I wasn't able to pick up issues 4 and 5 until a month or two ago and I still haven't gotten my hands on a single copy of issue 6. I'm glad to have the TPB as my reading copy (though I did read the singles as they came out). I really like most things from Tim Seeley I've read and this one isn't an exception though it really feels like it should have been at least 8 or 12 issues. Like the MOTUC minicomics, there are so many ideas and characters jammed in here that they're all not given enough time to shine. The concept is quite cool, though, but I would say this one is really for the hardcore MOTU fans only. If you're only passingly familiar with MOTU I could see you easily getting lost. 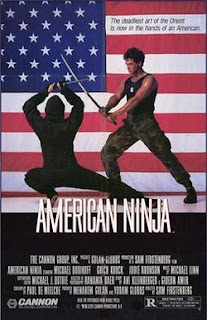 2020 may be one of the worst years on record but it'll also go down as the year I discovered American Ninja. How have I never seen this 1985 martial arts masterpiece from Cannon Films before now? A week or so ago I saw it on Amazon Prime and decided to give it a watch. Amazing! I now own a copy of it and the next two sequels. If you've never watched this movie and you love ninjas and 1980s action movies you gotta check it out. Watching it, I kind of imagine Michael Dudikoff's character, Joe Armstrong, as being Snake Eyes before his years with the G.I. Joe team and his fateful accident that left him scarred. Seriously, this movies is quite fun. I'd give it 4 1/2 shurikens out of 5.

The last thing I'm going to check out is the current list of my most popular articles. It's interesting to see what attracts the most attention among readers. For ongoing most popular reviews we've got:

Nocturna from He-Man/ New Adventures- This one keeps hanging in there. My guess is there probably are so few other reviews of this guy out there so when someone does look for him this is where they go. The New Adventures of He-Man just ain't that popular!

Scarlett and Snake Eyes from G.I. Joe Classified Series- Also return. I'd wager that this is still the hottest line out there right now and many folks are still trying to track down the first series, not to mention the impossible to obtain Target exclusives.

Casey Jones and Raphael (In Disguise) from NECA's Teenage Mutant Ninja Turtles line is new this week. NECA's toyline based on the 1990 film has been popular over the past couple of years but now that NECA can more widely release these toys Turtlemania is back in full effect. This was a dream set for me and I'm thrilled to have it!
What's new with you? Let me know!