Toy Review: Masters of the Universe from Little People: Collector by Fisher Price 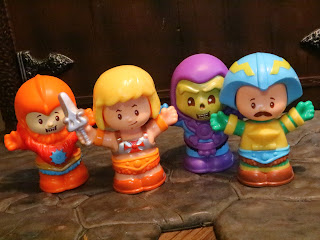 I'm a sucker for anything Masters of the Universe related and, yes, I'm getting ready to review some Little People. Some Masters of the Universe Little People, to be exact. If you were born in 1960 or anytime after, odds are that you had some little people as a kid. They've been around for a long time! I was born in the 1980s and I remember playing with them, mostly at my grandmother's house. My cousins had a lot of Little People and I'm sure I had some as well. My daughter had Little People (and still has them), though hers were different from mine. I remember both the wooden and the plastic "peg" people when I was little but the modern Little People are chunkier and all plastic with sculpted bodies. Fisher-Price has been attempting to capitalize on the nostalgia for both Little People and various fan properties by introducing the Little People: Collector brand. They've released Little People based on The Lord of the Rings, KISS, The Office, WWE, and now we've got Masters of the Universe. Mattel owns Fisher-Price, so it makes sense that they'd take advantage of the brandThe set of four figures (He-Man, Beast Man, Skeletor, and Man-At-Arms) just started shipping earlier this month and allow you and/ or your little ones to have some adventures in Eternia. Let's check out this fun little set after the break... 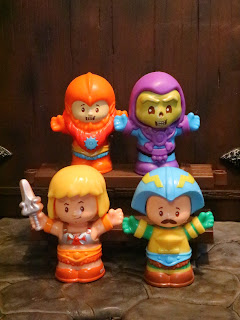 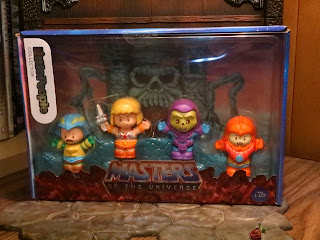 The Packaging:
* The Masters of the Universe Little People come in a pretty cool window box that is actually very collector friendly. There's a small clear sticker on the top that holds the window in place. Remove it and the window easily folds down, giving access to the figures inside. The Little People are sitting in a plastic that is Grayskull Green at the bottom with brick-like details. You can pull the figures out and put them back in with ease. Of course, there is also a nice Castle Grayskull backdrop for the figures, too. 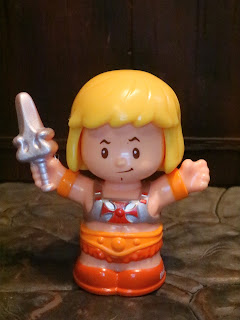 The Positives:
* Let's start with He-Man, the most powerful man in the universe! He-Man looks the most like a standard Little People figure (well, at least a standard "modern" Little People figure) as while he's dressed in his classic outfit, he has a pretty standard Little People shape. He's carrying a sword, though, which is something Little People don't usually do. The hair is spot on and the outfit features lots of little details. The trunks look oversized to my eyes but that might be part of the Little People aesthetic. No one else's trunks seem as big as He-Man's, though. My daughter's little people seemed to be softer and more rubbery, but these little guys feel like they're made from a harder plastic. I like these better as collector's items though I'm it seems that you could give them to a child safely. 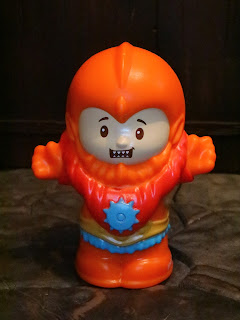 * Next up is Beast Man, Skeletor's hairy henchman! I gotta say that this version of Beast Man is adorable and quite possibly my favorite figure in the set. While he's missing his blue facial markings/ tattoos, the rest of this guy is very accurate to the vintage Beast Man. How cute, right? I love his pointy little teeth! 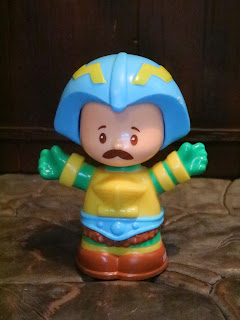 * Man-At-Arms is also here. He's sporting his stache and his armored helmet as well as his classic armor. The details are certainly simplified but there's still no doubt as to who this is. I do wish Man-At-Arms had his mace, though. He just looks a bit bare without it. 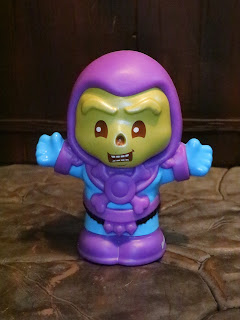 * Skeletor is the final figure in the set and he is definitely the most detailed thanks to his armor, his belt, and his unique face. He has eyes (which is different) and his face is definitely more gold than yellow. That's kind of weird, right? I like the look of the figure but there's definitely something a bit off about it. He also doesn't have his Havoc Staff. I'm pretty sure that the other day in a review I said that Skeletor has to have his Havoc Staff. Well, apparently Fisher-Price doesn't think so. Bummer. 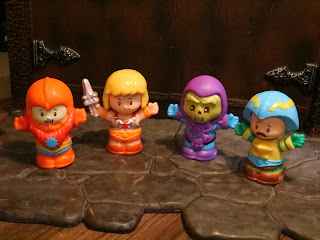