This is the Way: Jango Fett (Star Wars: Bounty Hunter) from Star Wars: The Black Series Phase III by Hasbro 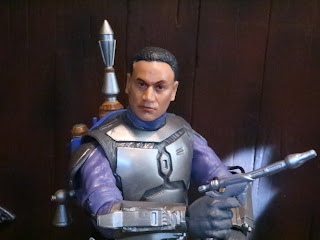 The Mandalorian Madness continues with a look at Jango Fett who is, according to the rulers of Mandalore, not actually a Mandalorian. He's allegedly from Concord Dawn, a planet in the Mandalore Sector of the Outer Rim, but not from Mandalore itself. Anyways, whether or not he's a Mandalorian it's pretty clear that Jango Fett was renowned as the greatest bounty hunter of his era. Hasbro released a Jango Fett in the Black Series back in early 2016 that was based on his appearance from Attack of the Clones, a film that's simultaneously one of the best and one of the worst Star Wars movies. This version of Jango Fett is one of GameStop exclusive Gaming Greats and is actually based on the 2002 GameCube and Playstation 2 game Star Wars: Bounty Hunter. That's pretty cool, right? It wasn't the best game but I do have some good memories of playing Star Wars: Bounty Hunter on my GameCube back in 2003 or so. The biggest weakness of the previous Jango Fett figure was the paint on the face so Hasbro has totally rectified that issue here with an incredible face print. To further differentiate the figure, though, you also get Jango's earlier Z-6 jetpack and a purple bodysuit. I thought it was worth a buy, especially with the great sales and the nice rewards GameStop has been running lately. Let's take a look at the Gaming Greats Jango Fett after the break... 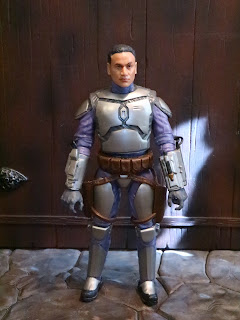 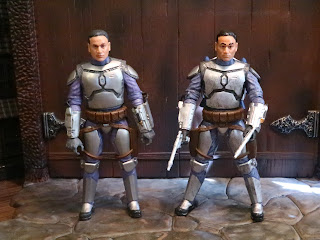 Comparison:
* On the left is the new Gaming Greats Jango Fett while the previously released Jango Fett is on the right. The biggest difference here are the presence of facial printing (the new Jango looks amazing), the purple bodysuit versus blue, the different jetpacks, and the cleaner look on the new Jango versus the weathering on the previous figure. 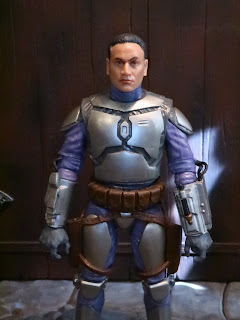 * While this is the same sculpt as the previous Jango Fett release from 4-5 years ago, it still holds up quite well. Hasbro has always done an excellent job with armored characters and they did a great job of capturing all of the detail in Jango's flight suit and armor. This suit is much cleaner than the previous one, giving Jango's armor a shiny, retro-futuristic aesthetic. All of the details are here, even including the rocket dart launchers on his knees. 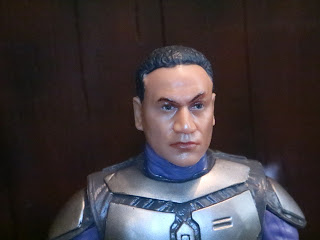 * The headsculpt is the winner here and makes this variant worth a purchase. This is actually the same headsculpt as the previous figure but the modern face printing is so amazing that the likeness is drastically improved. This is a great Temuera Morrison likeness! Honestly, it's really astounding how much the face printing improves these figures. 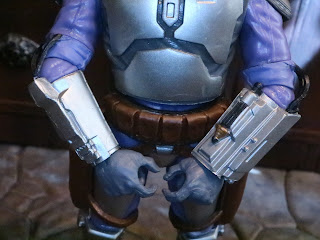 * Jango's gauntlets are nicely detailed and Hasbro gave Jango swivel biceps and swivel forearms in addition to the swivel/ hinge elbows. This makes posing the gauntlets, even though they have wires, much easier. 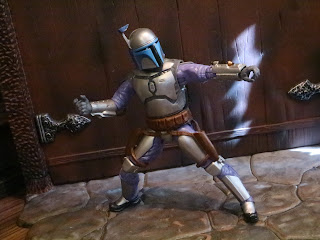 * The articulation on these older figures isn't as impressive or as smooth as on the newer figures but Jango is still no slouch. He's got most of the standard joints you'd expect from figures within the first 3-4 years of the Black Series plus the extra arm joints. 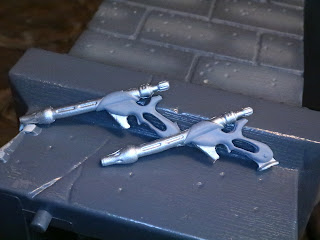 * Jango's WESTAR-34 blaster pistols look fantastic. The paintwork is a bit different on them but it does seem to match the game version of the pistols quite well. 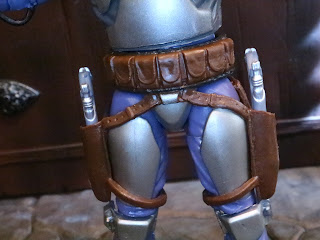 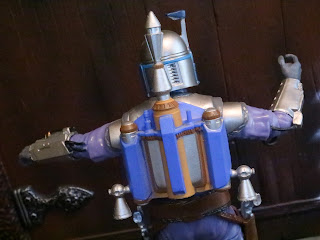 * Jango Fett comes with the Z-6 jetpack which he used in the Bounty Hunter game and in the earlier scenes in Episode II. Overall it's quite similar to Boba Fett's but with a different paintjob and some other minor differences, such as hollowed out thrusters on the bottom. 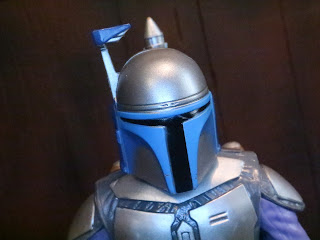 * Rather than an interchangeable helmeted head, Jango Fett comes with a removable helmet. I think it looks pretty slick and appropriately proportioned. Sometimes removable helmets look too large but this one seems just right to me. Plus you can have Jango hold it as an accessory if you want, which is harder to due with an actual swappable head. It's a lot cleaner than the previous helmet, too. 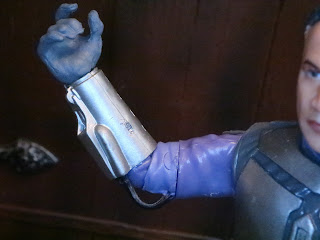 * My only real complaint with the figure is that the range of the motion on the elbow is definitely not too impressive, especially considering what we're getting now. I'm not saying we need a completely new Jango Fett (I'm saying that we don't need a new Jango Fett, either) but it would be nice if Hasbro had retooled this a bit. 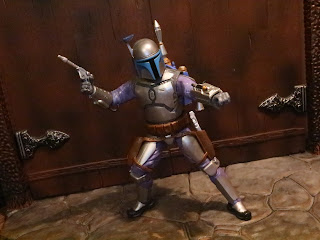