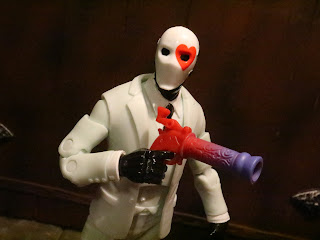 A few weeks ago I reviewed the first of the Fortnite: Legendary Series Legendary Loadout sets. While the set was a cool idea most of the weapons were oversized, meaning the 6 inch figures couldn't hold them, and too many of the weapons were copies of weapons we already had in the line. The second set is a bit better as it features four all new weapons and the size of the weapons fits the figures better. Interestingly, Jazwares also gave two of the weapons unique wraps, something I don't quite remember seeing in the line yet. I like the standard, more realistic looking weapons best but the wraps do add a nice pop of color to the set. Thus far these have only been available in the UK and Canada and there has been little to no information about there availability in the United States. Let's take a look at the Legendary Loadout #2 set after the break... 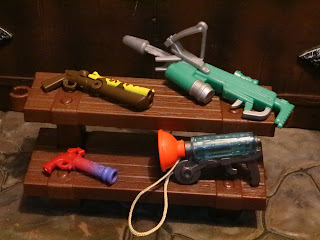 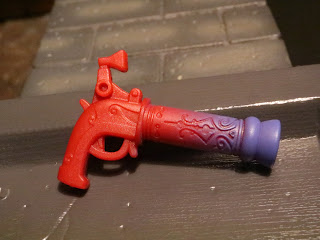 The Positives:
* First up let's take a look at the Flint-Knock Pistol, a Fortnite take on a traditional flintlock pistol. The detail is rather ornate on this one, including on the barrel. The color scheme is called the Hot & Cold wrap, presumably referencing the red and blue colors on the pistol which blend together in the middle. The Flint-Knock Pistol also has a moving hammer. That's a neat little feature! I really hope to see this weapon again in a more traditional color scheme but this one sure is nice. 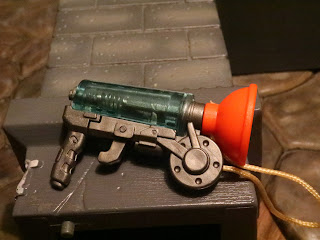 * The second weapon is the Grappler, a rather cool looking grappling hook-like device that launches a plunger. The detail on this is way nicer than I expected. It honestly looks like a well thought out home-made gadget that someone put some time and effort into. It's probably more of a gadget than a traditional weapon. The figures can hold it quite nicely and it seems suitably sized for the Fortnite: Legendary Series line. I also love the translucent barrel, allowing you to see the devices inner workings! 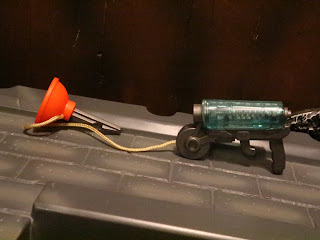 * The trigger guard is actually the trigger and pulling it launches the plunger out of the barrel. It works just fine and since the plunger is attached to a string it can function a bit like a grappling gun. It really is a neat little item, even if it's wildly impractical. 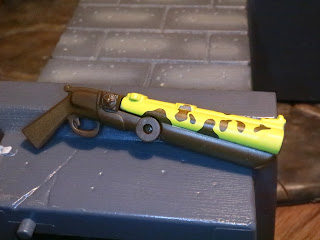 * The third weapon in the set is the Double Barrel Shotgun painted up in the colors of the Ripe wrap. Yes, it makes the shotgun look like a barrel. This is another solid accessory that easily fits in the hands of the figures and looks pretty cool. I wish it were a standard color rather than looking like an overripe banana but it's still pretty cool. Hopefully another figure will come with this as an accessory later on in the line. 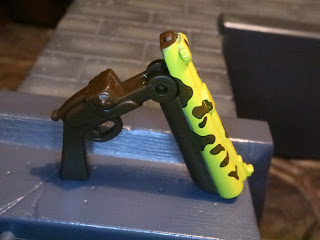 * The Double Barrel Shotgun's play feature is that it can break in half, allowing you to "load" it. It's a cool play feature and one that not many shotgun accessories have had as far as I can remember. 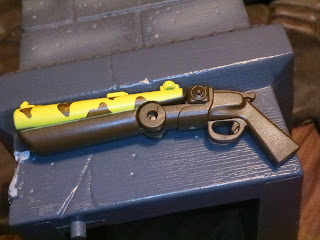 * If I have a negative with the Double Barrel Shotgun, it's that there's not a catch or anything holding the hinged barrel up. Sometimes it falls on its own, or at least starts to droop. A small tap or something molded in the break would have probably prevented this. 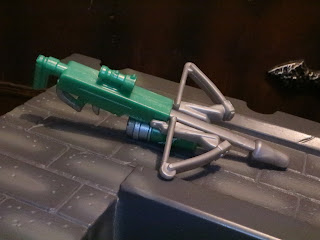 * The last weapon is the largest in this set and it's the Festive Paper wrapped Crossbow. A green and silver tactical crossbow will definitely give some of the Christmas themed figures another tool of destruction, won't it? There's a cool little graphic on the cylinder on the bottom that points out where an arrow is supposed to to be loaded as well. It's easier to see in the picture below. 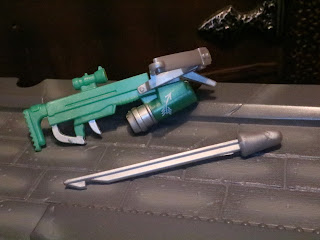 * The Crossbow actually launches an arrow. Or a large missile. It doesn't look particularly arrowish but it does launch. What's cool is that the trigger of the weapon actual launches the missile. Imagine that? 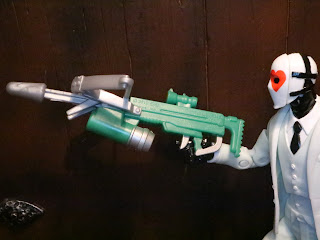 * I don't think the crossbow is too oversized. In fact, it seems to fit in just fine with the size and aesthetic of most other Fortnite weapons. What is weird, though, is the undersized handle. The grips seems more like it's designed for the 1/18th scale figures. 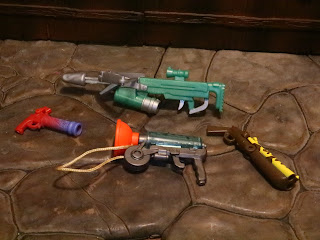 While you're going to have to debate the value of purchasing weapons individually (assuming you're in a country where these are on shelves, the US eventually gets these, or you plan to import them), overall I think this set is a much more worthy purchase than the first Legendary Loadout set. All of the weapons can actually be held by the figures and and they're all unique weapons we haven't seen before. The "action features" are quite cool in this set, especially the Grappler's firing plunger and the way the Double Barrel Shotgun breaks apart. This is a Great set and it's far more fun than the first one. I wonder if we'll see any more of these in the future?
For another Legendary Loadout check out my review of Legendary Loadout #1.
For more figures from the Fortnite Legendary Series check out the following:
Abstrakt
Beef Boss
Crackshot
DJ Yonder
Doggo
Drift
Enforcer
Eternal Voyager
Fishstick
Galaxy
Havoc
Jonesy
Legendary Loadout #1
Leviathan
Molten Battle Hound
Omega: Max Level (Purple)
P-1000
Peely
Rabbit Raider
Ragnarok: Max Level
Raven
Ruin
Rust Lord
Sentinel
Skull Trooper
Skull Trooper (Purple Glow)
Tomatohead
Valkyrie
The Visitor
Wild Card
X-Lord (Scavenger)