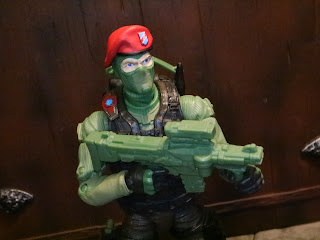 Let's dive back in to the G.I. Joe: Classified Series with a look at the third Target Exclusive figure from the Special Missions: Cobra Island subset: Wayne "Beach Head" Sneeden. Multiple times since the relaunch of G.I. Joe in 1998 Hasbro has released figures under their original file card names, probably to get around an issue with the character's regular name being trademarked or in use by another company or something. It's better than renaming the figures (remember when General Hawk was General Tomahawk for a few years?) and does pay tribute to the vintage file cards which were such a huge part of the vintage toyline. Between the Larry Hama penned file cards and the excellent Marvel comics series, G.I. Joe really had most of its cast fully fleshed out, far more so than most toylines. Beach Head is one of my favorite figures in the vintage G.I. Joe line and was part of the 1986 series of figures, which was the year when I began getting into getting into G.I. Joe. Dang, 1986 was a great year for G.I. Joe and some of my favorite figures like General Hawk v2, Low-Light, Lifeline, Viper, and Roadblock v2 come from that year. Anyways, I have to think my friend Matt from The Toy Box for picking up Beach Head for me. These Target figures have been a beast to find! Let's check out Wayne "Beach Head" Sneeden after the break. He's one of the best figures in this line so far and I'm really excited to show him off... 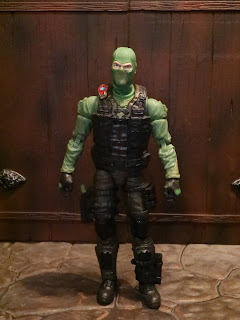 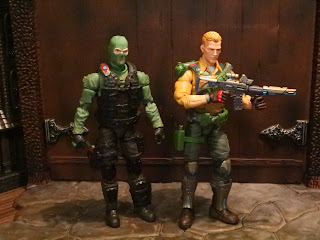 Comparison:
* Beach Head is one of the first figures to reuse some parts. There's not much reuse but he does use the legs and crotch of Duke (though with different shin guards) as well as Duke's holster. It's pretty minor reuse and it makes sense, so I'm good with it. 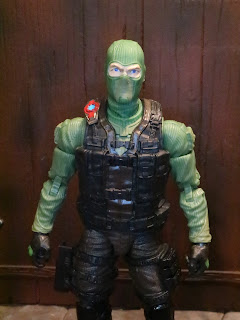 The Positives:
* Beach Head looks incredible. He's very similar to the vintage figure and most other incarnations of the character over the years. Beach Head is still wearing the tactical sweater of the vintage toy (complete with detailed ribbing) but he now has some armored elements and pouches attached to it. He's also sporting some body armor but that's largely hidden by his vest. I do wish he had extra magazines across his chest, like the vintage figure, but he is sporting lots of pouches and such and one of the communicators on hiss right shoulder that most of the Joes have. 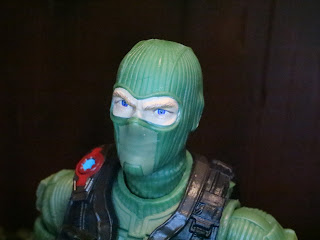 * The headsculpt is excellent. I love the determined look in Beach Head's eyes! He definitely seems like a hardened soldier and his trust balaclava looks appropriately modernized. Since Beach Head is known for a lack of personal hygiene and avoiding deodorant (that's actual information from the comics and such), everyone keeps their distance from him. He keeps his distance from people and wears a mask? Beach Head is the perfect figure for 2020! 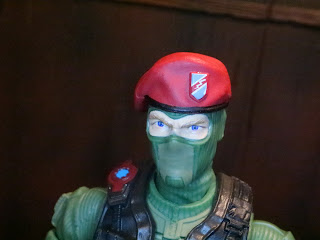 * While Beach Head is a Ranger, he's wearing an Airborne beret. I'm not an expert on military uniforms, so maybe someone can tell me if this is an oversight or if I'm missing something. The vintage figure had the red beret rolled up and tucked in his vest but on this figure it's a separate accessory. At first I thought it was a cool nod to the vintage figure but after having it on the figure a few times I think it adds a nice splash of color and makes Beach Head look even more awesome than your average soldier. 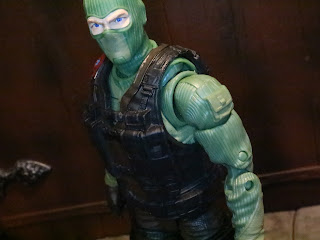 * While his vest isn't removable, it is made of a separate rubbery plastic over his torso. The vest gives the figure an excellent look and a more tactical feel. It's a great addition to the figure. 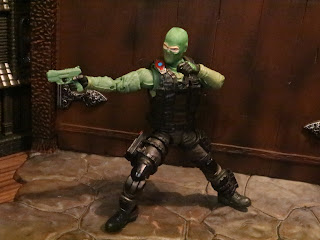 * Beach Head copies the standard articulation in the line, similar to Duke, and thus he has some incredible articulation. He's as articulated as the best Star Wars: The Black Series figures. Heck, maybe even a bit more! Besides the stuff like a balljointed neck base and the butterfly hinged pectorals, Beach Head also has vertical hinges in his hips that go up and down on the pegs connecting to the balljointed hips. That's some seriously articulation that allows for a great range of hip motion while reducing the gap between the hips and the crotch piece. This guy truly makes the classic Joes, the ARAH Joes, and the modern 1/18th scale Joes proud with his articulation. 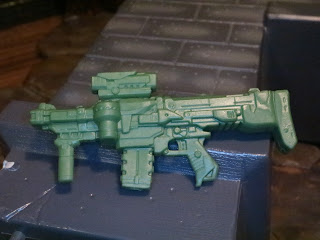 * Beach Head's primary weapon looks like a very heavily modified assault rifle. Hasbro has been avoiding traditional firearms in this line so the design is actually based on the Nerf Vortex Nitron. The little cylinders held discs on the actual Nerf gun but I imagine Beach Head could have some sort of alternate ammunition here as well. I love the look of this rifle and Beach Head can hold it wonderfully due to the forward rip. 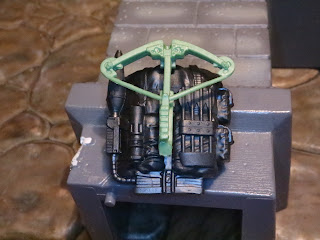 * Hasbro recreated Beach Head's vintage backpack quite faithfully. You can see the grappling hook and cord and he arrows. He also has a small crossbow for silent combat attached to the pack. The crossbow is removable, a feature first seen with the 25th Anniversary Beach Head figure, but this one stays on much more securely than that one did. 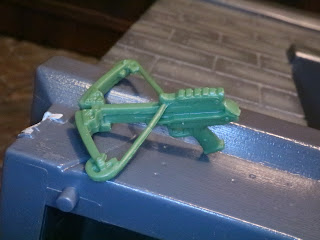 * Beach Head's crossbow is a cool accessory. It's simple but it does have a nice amount of detail. 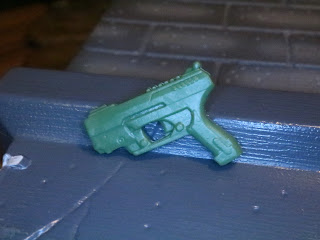 * His pistol is the same as Duke's pistol except that it is now molded in green. 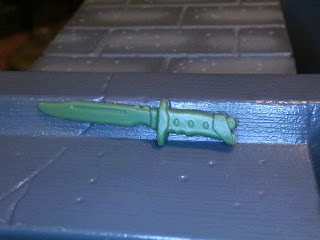 * Lastly, Beach head gets a combat knife for when he has to get up close and dirty in battle. It's a pretty cool looking accessory. 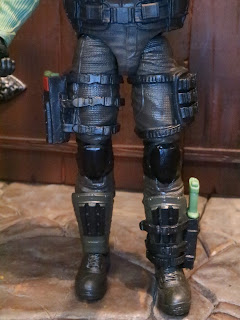 * Beach Head has a lot of places to store his gear, too. The pistol fits in the holster on his right hip while the knife slide into a sheathe on his left boot. There's also a series of pouches on his left thigh that could contain additional magazines for his pistol. All of the leg pouches are separate pieces though they really don't seem like you could remove them unless you disassembled the figure or did somethin else drastic. 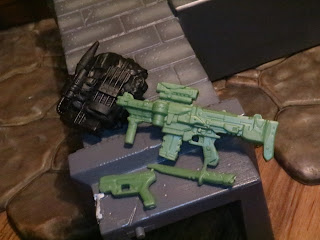 The Negatives:
* I love Beach Head's large assortment of weapons but I really wish that they had some painted details. It's so odd how Hasbro has given paint applications to the accessories of some figures (Duke, both Roadblocks, and both Destros) while others get none. 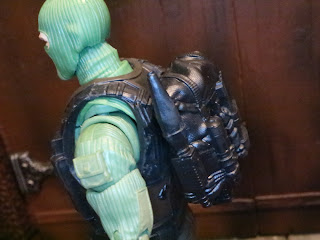 * I think it's due to the vest but Beach Head's backpack tends to fall off while you're handling him. Loose backpacks are a problem on a couple figures in this line and Hasbro really needs to do something about it. Backpacks stayed on nice and tight in the vintage line and most lines since so I'm not sure what the problem is here. 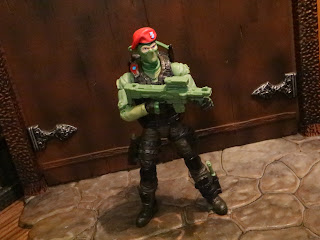 Despite my little quibbles, I absolutely think Beach Head is an Epic figure. He might even be my favorite figure in the Classified Series yet (he might be tied with the Cobra Trooper). He's a solid figure with excellent details, useful articulation, and lots of fun accessories. I've probably spent more time messing around with Beach Head than any other figure in the line thus far. These Target exclusives are a pain to find so I really feel for you if you haven't found one yet. Beach Head is a phenomenal figure and it's a shame so many collectors are missing out on him.
For another review of a Wayne "Beach Head" Sneeden figure check out my guest review of the G.I. Joe 25th Anniversary Beach Head at MWCToys.com
For more figures from the G.I. Joe: Classified Series check out the following:
Arctic Mission Storm Shadow
Cobra Commander
Cobra Trooper
Destro
Duke
Gung Ho
Profit Director Destro
Roadblock
Roadblock (Special Missions: Cobra Island)
Scarlett
Snake Eyes