This is the Way: The Mandalorian from Star Wars: The Black Series Phase IV by Hasbro 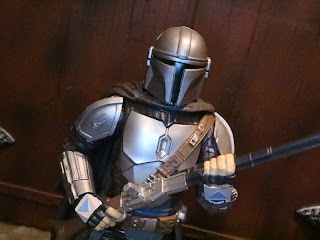 Last year I couldn't find the Phase III figure of The Mandalorian that launched on Triple Force Friday at all. In fact, I didn't finally get one until the end of October when a preorder I had arrived from Big Bad Toy Store. On the same day that I received that figure I also received the newest version of The Mandalorian from The Black Series: Phase IV. This version of Din Djarin, the titular Mandalorian, is clad in his Beskar armor that he wears later on in the first season of the show. I'm pretty excited to have both versions of Din Dharin thus far and I imagine I'll be picking up any future releases, too. Let's take a look at The Mandalorian after the break... 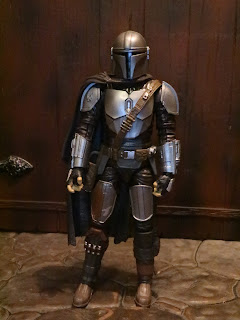 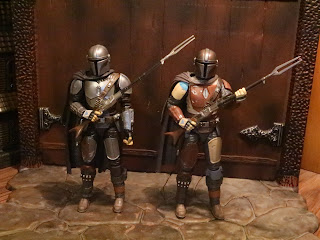 Comparison:
* Mando in his Beskar armor from Phase IV is on the left while the original figure of The Mandalorian from Phase III is on the right. The figures do share a few parts including capes, lower legs, and hands. That's accurate to the show, though, as Din Djarin has upgraded his armor over time whenever he gets his hands on some more beskar. 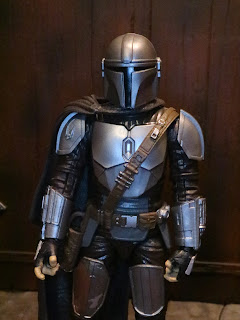 The Positives:
* The Mandalorian is a sweet looking figure. While he's rocking a traditional Mandalorian look he also has his own unique design. The shiny beskar armor looks amazing and the sculpt really conveys the look of someone wearing multiple separate pieces of armor over a jumpsuit. The layering is excellent and feels authentic to the show. The paintwork is excellent, too, with clean paint details and some nice weathering where it makes sense. 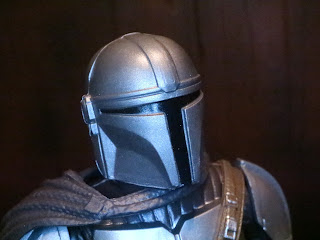 * Mando's distinctive Beskar helmet looks pretty good. It's not as shiny as I'd hoped for but it still looks like it's made of a lustrous metal. Isn't it amazing how much emotion Pedro Pascal manages to give the character through his voice while remaining helmeted 99.9% of the time? He does an amazing job with the role although there are two other guys who are often in the suit: Brendan Wayne and Lateef Crowder. It's a team effort and it's working out amazingly. 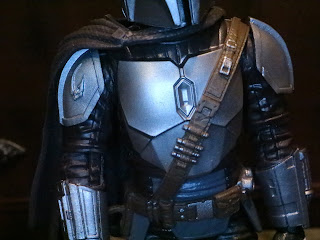 * Mando's chest armor is very detailed with a really cool design. Oh, and he's sporting his pauldron that has the mudhorn signet on it. Remember the mudhorn? That's the beast that the Mandalorian and the Child defeated on Arvala-7 in Chapter 2: The Child (that's still one of mymfavorite episodes). This show has some really cool continuity and character growth elements and Din Djarin being given the symbol of the mudhorn as part of his new clan with the founding Child is a pretty amazing one. 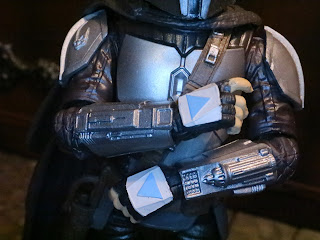 * The Mandalorian's vambarces are pretty rocking. His left vambrace houses the whistling birds launcer while the right has his whipcord launcher housed in it. They both have flamethrowers in them, too. I really wish I could pick up some of these from the store as they'd be amazingly handy in my collecting pursuits, especially when fighting off scalpers! 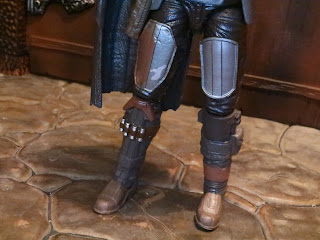 * The legs are quite detailed too with armored plates and lots of straps and such. I'm really hoping we get a visual dictionary for The Mandalorian soon so we know what all of the cool little details are called and what purposes they serve. 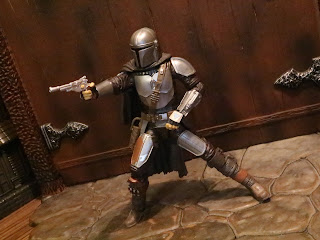 * The Mandalorian has excellent articulation, just like nearly every other figure Hasbro has released since they really improved the line in 2018. The articulation is smooth, plentiful, and Mando can hold all of his weapons appropriately, including holding his rifle with both hands. 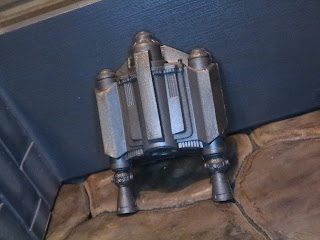 * Din Djarin doesn't receive his jetpack until near the end of the first season but he becomes pretty capable with it fairly quickly. The jetpack doesn't have any paint details but the sculpt is great and it fits Mando's back securely. 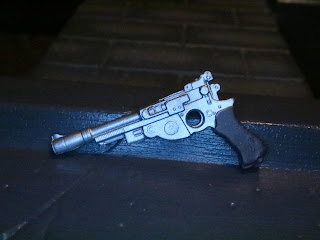 * This set includes both off Mando's firearms including his sleek, western styled blaster pistol. 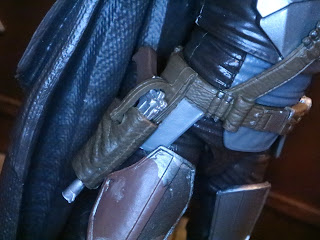 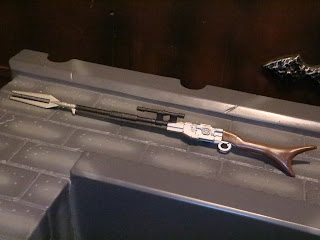 * Most importantly, Mando comes with his Amban phase-pulse blaster. This is such a wicked rifle and it's capable of disintegration when needed. The paint work is excellent, too. 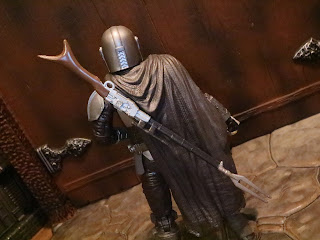 * The Amban can plug into a port in the Mandalorian's back, allowing him to carry it slung over his shoulder. 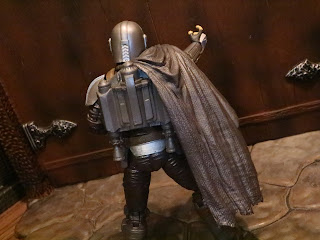 The Negatives:
* I like the cape and the jetpack but it's impossible to have them bot on the figure at the same time. The cape is a pain to remove, too. I really wish Mando had a cloth cape. 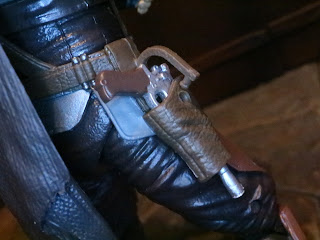 * The strap holding Mando's pistol in place is also a bit of a pain to get into place. You'll really have to work with it a bit. 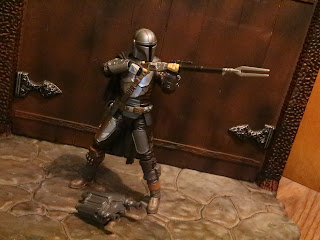 Other than the weird jetpack and cape quirk, there's really not much else negative to say about the Mandalorian. This is easily one of my favorite figures from The Black Series this year. He looks awesome, if fully loaded for battle, and is extremely well articulated. I imagine this is going to be one of the most difficult figures to obtain from this line so definitely shop around and use retailers who let you preorder. Hasbro already has the Armorer as a repack in an upcoming case so surely they'll repack Din Djarin here.
This is the first figure of Din Djarin/ The Mandalorian that I've reviewed. For more figures from Star Wars: The Black Series Phase IV check out the following:
Admiral Ackbar
Garazeb "Zeb" Orrelios