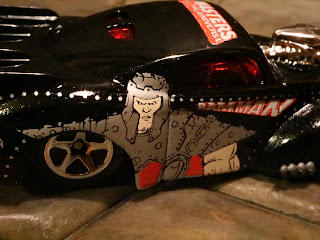 On Wednesday evening I dropped by my local comic shop to pick up issues #2 and #3 of He-Man and the Masters of the Multiverse. Little did I know I would end up finding some really cool Masters of the Universe goodness there! I ended up finding a new She-Ra t-shirt (with an old school design), four issues of the MVCreations comic for around $1.50 each, and two cars from the 2002 Hot Wheels He-Man subset for a $1 each. I decided to check one of them out today just for fun. Also, it's Ram Man, who is one of my favorites! (The other car was the Man-at-Arms car). While Mattel is currently ramping things up to give MOTU a big push in 2020, the last big push was in 2002 where we saw lots of MOTU product on store shelves. Tooth brushes, puzzles, games, and even random Hot Wheels cars: The 200x series definitely had a lot of representation on store shelves. This subset of cars from 2002 featured regular vehicles with MOTU art on the side. Let's check out this '41 Willys Coupe plastered with Ram Man's image after the break... 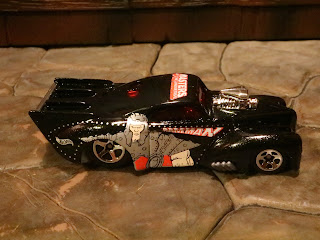 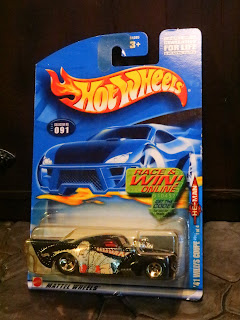 
* I didn't leave this one in the package since the blister is a bit yellowed and the package itself isn't really MOTU inspired or anything (other than the silhouette of the 200x techno Power Sword on the right hand side). 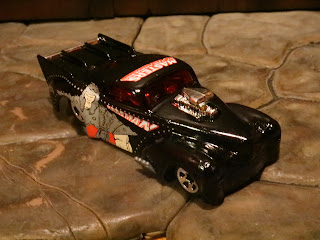 * This is a very heavily modified version of the 1941 Willys Americar Coupe. The large spoiler-like back and the elevated engine definitely show that this isn't your run of the mill car. I like the tinted red windows, too. 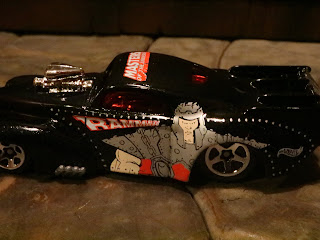 * The real reason I bought this is because of the Ram Man art on the side. Check it out! Both sides of the car have a picture of Ram Man and his name painted on the side! Imagine being a big enough fan of Ram Man (and having the money) to do something like this. I want to do this with my Honda CRV, but I want Moss Man or Orko emblazoned on it, instead. While this is definitely the 200x version of Ram Man, the art style here doesn't seem to have the anime edge of most other MOTU art from that era. It's an interesting look and I kind of like it. 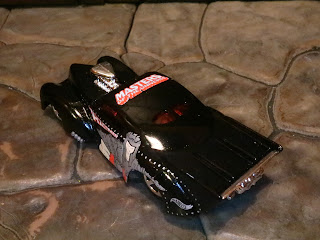 * In case someone were to find this car and not know who Ram Man is, the top of the car has the Masters of the Universe logo painted on it as well. 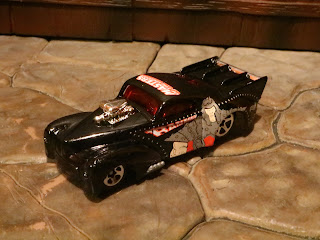 I'm sure there aren't many folks running out to track this one down but it is kind of a cool little oddity. I'm always intrigued by folks who have a specific collection of items based on a particular character, so maybe there's a Ram Man fan out there missing this? It can be had for pretty cheap. Masters of the Universe and Hot Wheels have a long history, though only now are we getting actual MOTU vehicles as Hot Wheels. This is a Good and a 1/2 little find and I'm glad to have picked it up! Maybe an armored car or something would have been more appropriate for Ram Man, but I'm down with this souped up Willys Coupe as well.