Wrapping Up 2019: Beastman (Green) from Masters of the Universe Japanese Vinyls by Super7 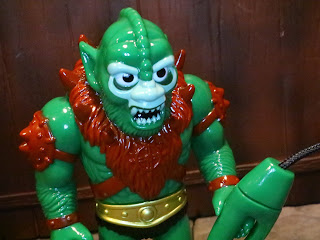 Today I'm wrapping up my 2019 reviews with the last item I purchased in 2019: The Green Beast Man from Super7's Masters of the Universe Japanese Vinyl line (they call him "Beastman" on the website and invoice". I've picked up a few of the Micro Vinyls before but this was the first of the larger vinyls I picked up. Well, larger than the micros. These guys are only around 4 1/2 inches tall, so they're not huge. They're kind of pricey, though. I've skipped all of the previous releases of these (though they do tend to sell out really, really fast) but I couldn't pass up this green Beast Man. You know why? Because green Beast Man is.... Moss Man! Yup, this guy totally seems like a Moss Man homage and that's enough to get me to drop some scratch any day, you know? I love Moss Man. Heck, I asked my dad to make me a Moss Man birthday cake for my last birthday (true story, and he did it. My wife refused!) so you can say that I absolutely love Moss Man. Let's check this guy out after the break... 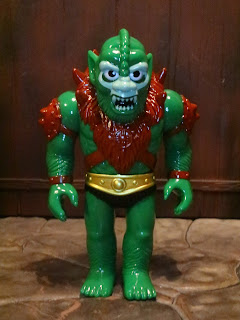 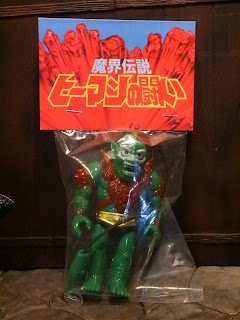 
* Some of the Super7 Japanese Vinyl figures appear to come in really cool boxes, but this Beast Man only comes in a plastic bag with a cardboard header. I kind of dig the "bootleg" aesthetic of it, but at the same time I wouldn't have minded something a bit more impressive and unique. 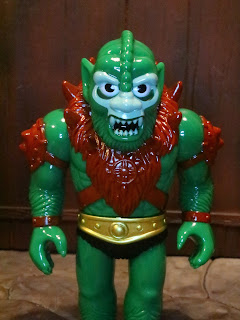 * This is a really cool looking figure. If you're not familiar with the sofubi style, check out this cool article from the Japan Times and my review of Medicom's sofubi Batgirl. The sculpt is definitely Beast Man, although he clearly has the Moss Man colors. Well, he's green at least. Moss Man didn't have any body armor. Is this really Moss Man then? In spirit, maybe. I like the look and feel of the sculpt and the bright colors. The paintwork is very neat and clean here, too. He really looks fantastic. 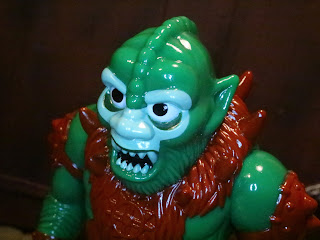 * The headsculpt is great and it really captures a lot of key elements of Beast Man much more intricately than most other Beast Man figures. I love the pointy ears, the sharp teeth, and the segmented ridge running across his head. He also kind of has that trademark "dumb" Beast Man look, as well. Moss Man is a gentleman and a scholar; Beast Man is Eternia's resident dunce, thus making this clearly Beast Man. 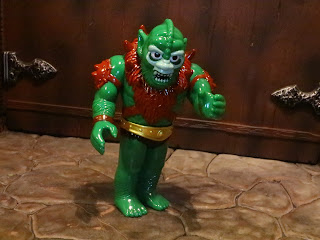 * There isn't a lot of articulation here but there's enough to get a fun pose on the shelf and to fool around with the toy a bit. The feel of this guy is really cool. the soft vinyl and unique molding technique definitely gives the figure a unique feel. While I think the price is really high on these, I can definitely "feel" the appeal of this style of toy. I'm assuming these are made in fairly small numbers or something, especially due to the unique creation process. 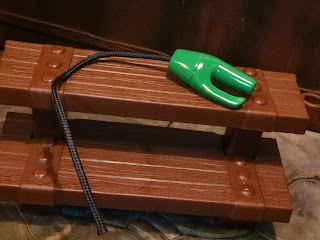 * Beast man comes with his whip. The handle is green, just like him, while the whip itself is made from a cord. The cord is actually pretty cool as it allows for a little bit of posing. Not much, but you can definitely straighten it out or curl it up. 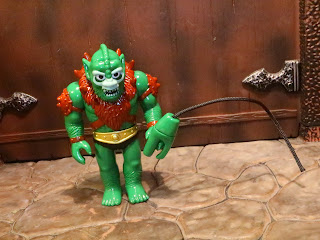 I really can't talk about this guy without mentioning the price. At $65 bucks, this guy was very much a splurge. I know that Super7 tends to be on the pricier side, but I still can't figure out where the $65 dollar price tag comes from. It's gotta be a combination of a low run, the "handcrafted" nature of the piece, and the particulars of this market of collectibles. I do like this figure, and I'm giving it a Eh 1/2. I like the figure itself, but this is really only made for folks who love this style or the character (or who love Moss Man) and would feel forever incomplete without this. I like it, but the price still kills me.