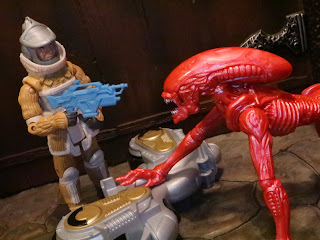 It's been a week or so since my last review of one of the sets from Lanard Toys' Alien Collection and today I'm back to look at another set. Other than the Alien Queen and the larger vehicles, the smaller Xenomorph Swarm sets don't really have unique names, which kind of drives me crazy. The set I'm reviewing today includes a red Xenomorph runner, a Weyland commando, and a planetary rover bike. Of course, the reason I'm buying these sets is to use the Xenomorphs and some of the accessories with my Kenner Aliens/ Predator figures. I have a complete Kenner Aliens/ Predator collection, so it's nice to be able to add some more items to that line. For $10 bucks a pop for the Xenomorph Swarm sets, I don't mind getting a few clunky pieces mixed in with the excellent Xenomorphs. Let's check out this set after the break and see if there's enough value in this pack to make it worth your money... 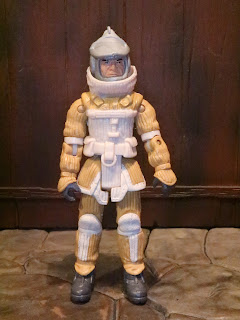 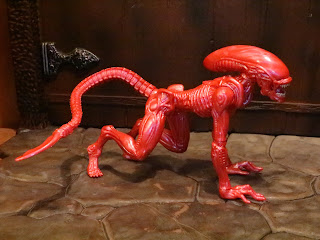 Non-Scalper Price: $10 dollars for the set 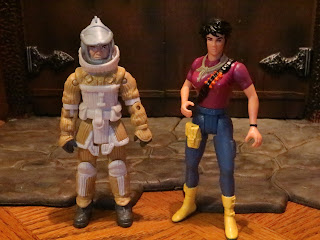 * On the left is the Weyland Commando while the vintage Kenner Ripley figure is on the right. The Weyland Commando is a reused The Corps Elite figure and while he's a bit shorter than the Kenner figures, I don't think he stands out terribly. Honestly, you could probably put him in a vehicle or have him posed so that the height difference isn't noticeable. 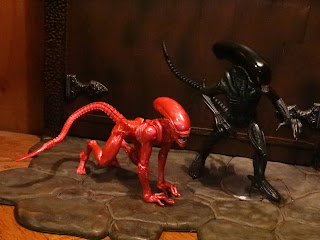 *On the left is the Xenomorph Runner from this set while on the right is the Warrior Alien from the vintage Kenner line. I really think Lanard's Xenomorphs fit in quite well with the Kenner line, particularly considering some of the more uniquely colored aliens. This guy's a runner, so he's meant to be shorter, like the dog alien/ "The Dragon" from Alien 3. 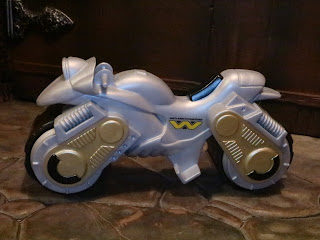 * The set comes with a Planetary Hover Bike that is reused from a Lanard StarForce set.
I knew it had to be reused and I'm glad I tracked the source down so easily. It's not a bad looking vehicle; it's sort of a sleek, futuristic motorcycle with two rolling wheels and the logo of the Weyland-Yutani Corporation on both sides. 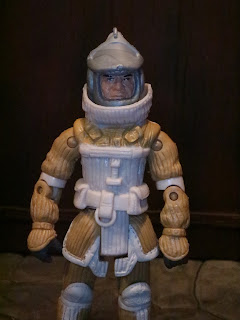 * The Weyland Commando (not sure why they don't call him the Weyland-Yutani Commando) is clearly based on these guys from Alien 3, most noticeably due to the paint job. The figure itself is reused: He's Ogre from a The Corps Elite set I reviewed back in 2015. He's not a bad figure at all and he fits in with the Kenner line fairly well. 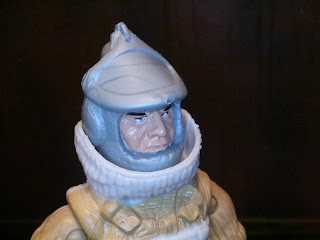 * The helmet isn't a perfect fit for the Weyland-Yutani Commandos but, again, for a reused, low-budget figure, he's not bad. I like the mean, scarred visage of Ogre. He kind of looks like Dengar a bit, doesn't she? 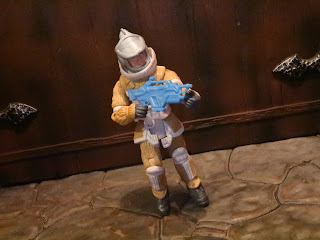 * While he's not as articulated as a 1980s G.I. Joe, the Weyland Commando is definitely more articulated than some other 1/18th scale action figures. He has swivel hips, which is limiting, but everything else is pretty mobile with a decent range of movement. He's easily the best quality human figure in the Alien Collection thus far. 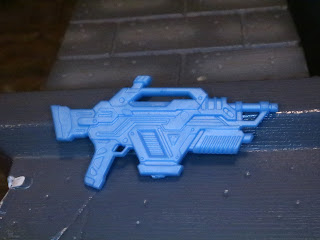 * The Weyland Commando comes with a weapon that definitely looks like a more compact version of the M41A Pulse Rifle with a few minor modifications. I like the weapons in this line as they sport a lot of detail for small, unpainted accessories and they fit in the hands of most of the vintage Kenner toys. 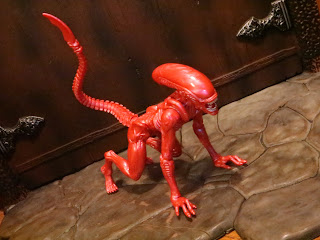 * The Runner Xenomorph is clearly based on "The Dragon" (AKA the dog alien) from Alien 3. It's a fantastic sculpt and it very well may be the high point of this entire line. It's fantastic, terrifying, and it really fills in a gap in the vintage Kenner Aliens line. While some drybrushing or an ink wash would really improve things, as it stands the red here is still quite striking. I love this figure! 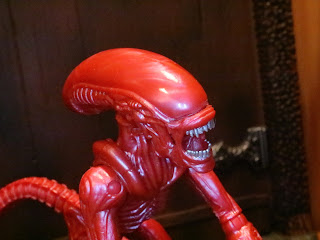 * Check out the headssculpt! It's actually different from the gold Xenomorph Soldier from this series. it has a slimmer, sleeker dome with a less open jaw. It's a great sculpt and the silver teeth send it over the edge. 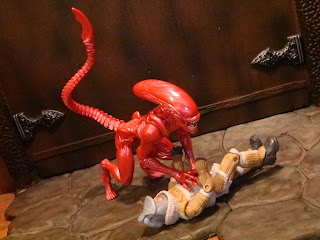 * The articulation is excellent. While the back legs are just swivels, they do help keep the Xenomorph standing. The tail is on a balljoint, allowing for some great, expressive posing, and the arms feature multiple swivel/hinge joints. 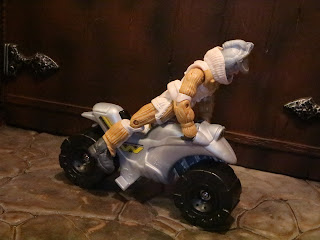 
* The Planetary Hover Bike is definitely a bit undersized and since no figure in the line has balljointed or swivel/hinge hips, no one can ride it. Thus, it's just a piece of background scenery. Lame! 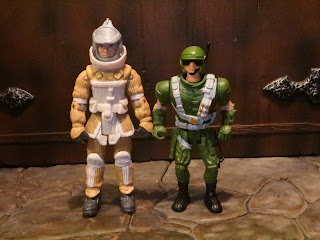 * As I started reviewing these sets, I've realized that the scale of the humans in these sets is all over the place. The Weyland Commando is taller than everyone else with the Research Scientist being shorter than him and the various soldiers being even shorter still. A lack of consistent internal scale in a line definitely is one of my pet peeves, and this line is particularly egregious about it. 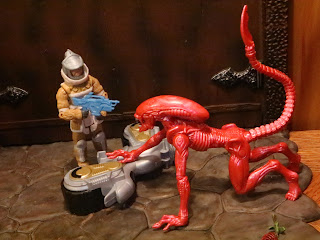 After my criticisms, you're probably going to be shocked when I give this set an Epic rating. What? Why? How? Here's the thing: For $10, I would snap this Xenomorph Runner off the shelf in a heartbeat. He's just a really, really good Aliens toy that blends in near perfectly with the Kenner line. Now, imagine that all of the other stuff are just accessories. Heck, pretend they don't exist! The Xenomorph Runner is still a darn fine toy. I like the Weyland Commando, too, especially his rifle. For $10 bucks, this set is a steal and it's easily one of the best for blending in with the Kenner line.

For more Xenomorphs, check out my reviews of the M.U.S.C.L.E. Xenomorph from Alien Pack A, the Attack Alien from Pack C, the Xenomorph Warrior from Aliens Pack A, the Alien Warrior (with open mouth) from Pack B, and the Alien Warrior (Crouching) from Pack C, the ReAction Alien (with Metallic Flesh), the gold Xenomorph Drone from Lanard's Alien Collection, NECA's Xenomorph Warrior, the standard Xenomorph from Kenner's Alien versus Predator 2 pack as well as the Bull Alien, Gorilla Alien, and Scorpion Alien, the Loyal Subjects' Xenomorph (Black Battle Damaged) and Xenomorph (Ice Blue Metallic), and the Micro Machines Alien Transforming Playset which is loaded with Xenomorphs.

This is the first Weyland/ Weyland-Yutani Commando I've reviewed. For more figures from the Alien Collection, check out the following:
Alien Queen
Colonial Marines 'Vs' Aliens (Research Scientist, Egg and Facehugger, and Gold Xenomorph)
Posted by Barbecue17 at 2/09/2020