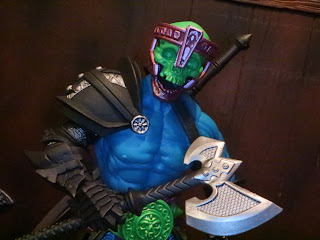 The Four Horsemen have a long history with the Masters of the Universe brand and they've been making it a tradition to include some MOTU inspired figures sprinkled throughout the Mythic Legions line. The latest Mythic Legions series, Wasteland, just started popping up en masse and the set contains tribute figures to two great MOTU characters: Trap Jaw and Panthor! Today I'm checking out the Trap Jaw tribute figure. He's named Kronnaw, a portmanteau of Kronis (Trap Jaw's real name) and "jaw." Kronnaw's bio reveals him as the creation of an evil and arcane experiment, causing him to be a walking death dealer who kills indiscriminately. He's probably my favorite Mythic Legions figure yet (I don't own many), so let's check him out after the break so you can see why! 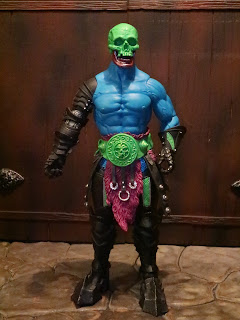 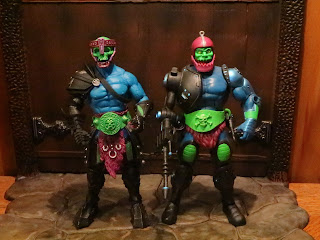 * Just for fun, here's a shot of Kronnaw (left) next to the Masters of the Universe Classics Trap Jaw. Putting these two side by side really shows off how great of a job the Four Horsemen did in crafting Kronnaw as a cool tribute to Trap Jaw. The colors are spot on! 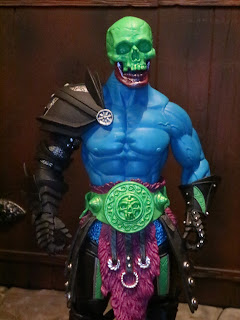 * I love the look of Kronnaw. To capture the design of Trap Jaw, the colors are spot on with a great mixture of pruple, green, blue, and black, and an asymmetrical arm design. While Kronnaw doesn't have a mechanical arm like Trap Jaw, he does have an armored right arm with a massive pauldron (the pauldron is removable, and technically you could put it on either side, but it looks fantastic on the right. 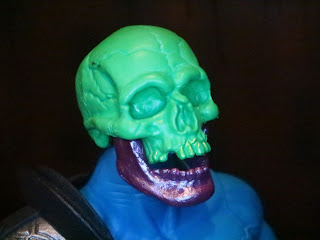 * Kronnaw's skull is a bright green skull with a metallic purple jaw. The colors match Trap Jaw perfectly! This is the first time I've had one of the Mythic Legions skull sculpts in hand and I love it. It's very detailed. Gosh, I hope they do a Scare Glow tribute figure soon! Anyways, the lower jaw is hinged, so you get even more poses out of him! 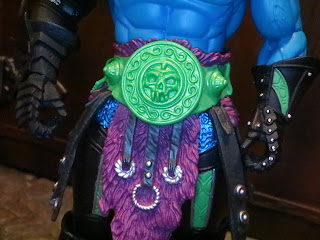 * I really like Kronnaw's belt! I'm not sure if this is a reused piece or a new sculpt but it looks fantastic. It's a fantastic looking nod to Trap Jaw but it's also just an excellently sculpted piece on its own as well. 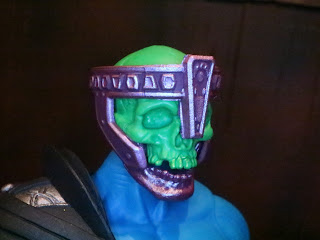 * To complete the Trap Jaw look for Kronnaw, the figure comes with an armored crown of sorts. I honestly know what to call a helmet like this but it fits around Kronnaw's head with armored bits extending down to cover the bridge of his nose (or where his nose would be) and the sides of his head. It's metallic purple, just like Kronnaw's jaw. 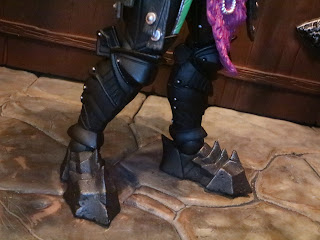 * The Four Horsemen almost always give characters really cool boots and Kronnaw is no exception. Check these boots out! The feet are the same as those of the Orc Legion Builder 3, but the legs are different (probably reused from somewhere else, though). 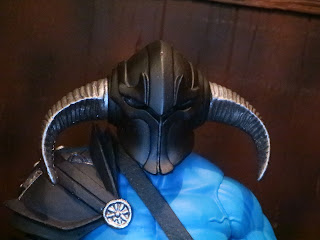 * All of the figures I've picked up from Mythic Legions thus far have included an alternate portrait and Kronnaw is no exception! He comes with a black armored helmet that looks like Frank Frazetta's Death Dealer or something the Dragonborn from Skyrim would wear. The Orc Legion Builder 3 also came with this helmet, so it's a reused piece. Still cool, though. The horns rotate you can create your own alternate look for Kronnaw! 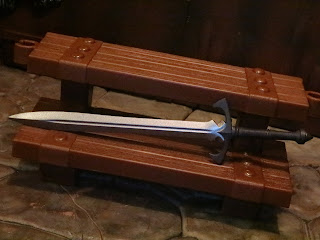 * Kronnaw is loaded with accessories! First up is a sword. It's another piece reused from the Orc Legion Builer 3 (and probably a number of other figures) but here it has a black hilt with a silver blade. 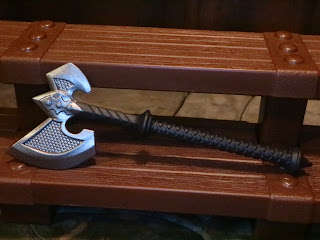 * Kronnaw's second weapon is this cool ax. It's shorter than a great ax though it's still quite decorative. The texture on the side of the blade it pretty impressive! 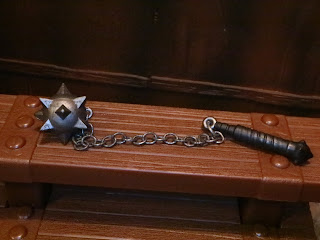 * Third up is this flail. It's a great sculpt with a real plastic chain and a wicked looking morning star. 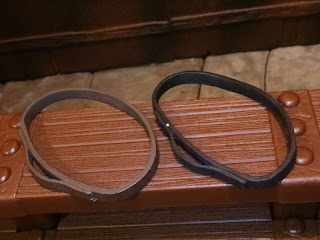 * For storing away his sword, Kronnaw comes with two chest straps. The black one looks best with his armor, but there's a brown leather looking one, too. Just remove his head (it's a simple balljoint) and place it over his chest. 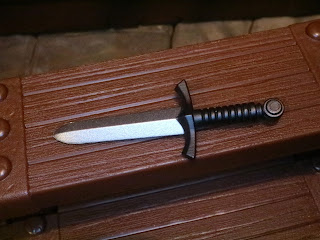 * Last up is this short dagger with a silver blade and a black hilt. 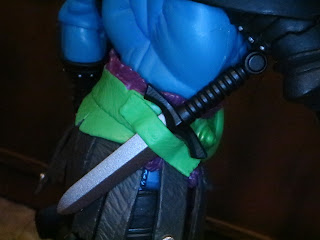 * There's a loop on Kronnaw's belt which allows the dagger to be stored on his body. With his sword in the chest strap loop and his dagger in this loop, Kronnaw has two hands free for his ax and flail, which means he can carry all of his weapons! I love that! 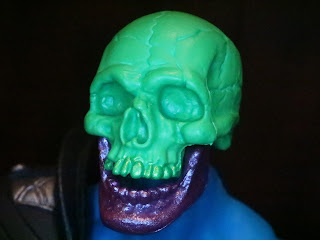 * It's not a huge issue but I would have liked to have seen some black paint in the eye sockets and nasal cavity of Kronnaw. That would have spiced things up even more, right? 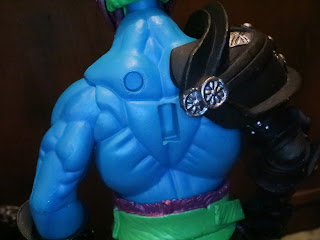 * Like the on other figures, Kronnaw has some visible holes and a slot. The holes are for the pauldrons and the slot is used on other figures that share this sculpt (the line uses lots of shared parts). Still, if you're posing these guys in battle it would be nice to find a way to cover those holes. Maybe some plugs or something? 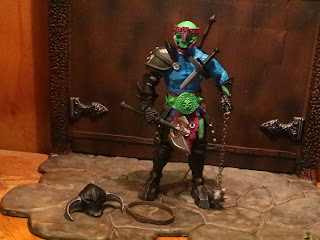 Kronnaw is another Epic figure in this line. He's only the fourth Mythic Legions figure I've owned but I'm always impressed with this line. The older releases are quite expensive now, so there's no way to catch up. Still, Kronnaw is an excellent figure. He's fun, loaded with articulation and accessories, and he makes a great tribute figure to Trap Jaw. I really like him and I'm sure lots of MOTU collectors will dig him, too.

This is the first figure of Kronnaw I've reviewed on the site. For more Mythic Legions figures, check out the following:
Cowarros
Malynna
Orc Legion Builder 3
Posted by Barbecue17 at 2/23/2020