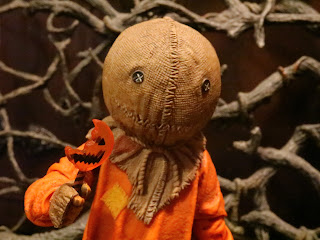 I was really hoping that NECA's Ultimate Sam from Trick 'r Treat would come out during October 2019 so I was able to include him in 31 Days of Toy Terror, but he didn't. He actually came out in November, so I ended up getting him for Christmas. I love Sam and Trick 'r Treat and getting a new version of the character from NECA was definitely a real treat. The original Sam figure debuted in the Cult Classics line back in 2008, before the movie even got its first wide release by being released on DVD in October 2009. That figure is definitely a popular piece but NECA has released a true upgrade now of Sam, who certainly has been rising in popularity over the past decade or so as one of the new icons of Halloween. NECA clearly puts their heart and soul into these Ultimate releases and Sam is another fantastic one. Let's check him out after the break and see what all this guy has to offer... 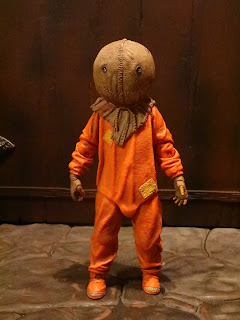 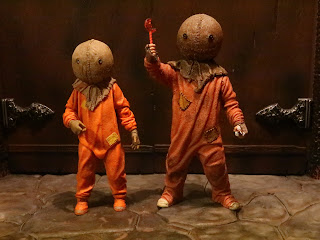 *For comparison here is the new Ultimate Sam (left) alongside of NECA's Cult Classics Sam (right). These are both completely different figures with no shared parts whatsoever. Also, the Cult Classics Sam is a good inch or so taller with little articulation. There are a few accessories that seem to be shared though, including one of the jack o' lanterns and the candy bar shiv. 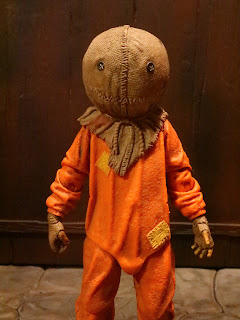 * Sam looks like Sam, so what more could you ask for, right? NECA did a great job with this guy as the proportions are excellent and the costume looks spot on. Sam wears slightly baggy orange footy pajamas with a few patches on them, and they're really nicely rendered here. He's built like some of the other modern NECA figures (Michael Myers come to mind) where his torso is actually a rubbery piece over a more standard articulated torso. He might even have a mid-torso balljoint under there, though it's not very mobile if that's the case. 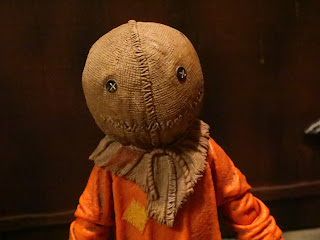 * The burlap sack covered head is my favorite look for Sam and it looks perfect here. I love it! Sam really mixes together spooky and adorable nicely, doesn't he? The texture of the burlap and the details on the stitching is perfect. The eyes are spot on, too; you can even see where they're sewn on! He has a little bit of dried blood on the bottom right of his mask, too. Who's blood could it be, I wonder? 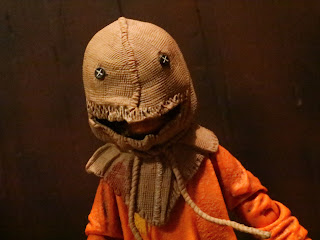 * The second headsculpt features Sam's mask with the mouth torn open, revealing just a glimpse of his true pumpkin-like form (there is a sculpted head underneath, though it's tough to see). This is a really cool headsculpt. I like how the buttons and the rip in burlap make the mask seem expressive. It kind of reminds me of Oogie Boogie! 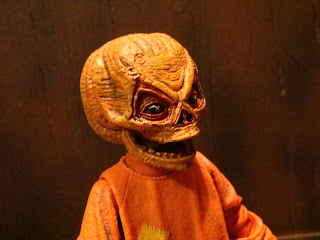 * When Sam takes off his mask to reveal his true face he looks pretty creepy! NECA did a killer job here. I love the details and how the sculpt and paint look wet and organic. Sam even has a hinged jaw. 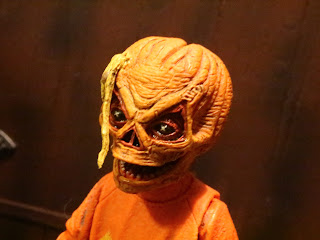 * Sam has another unmasked headsculpt, and this one is even more expressive than the first. It's from his fight with Mr. Kreeg and it shows Sam with some random bits of pumpkin gut like stuff running down his brow. This is just brilliant. God bless NECA, because they're masters at what they do! 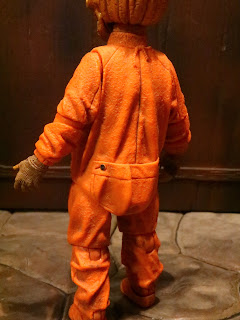 * The folds and wrinkles on Sam's pajamas are so well done. He even has the flap in the back of his union suit! 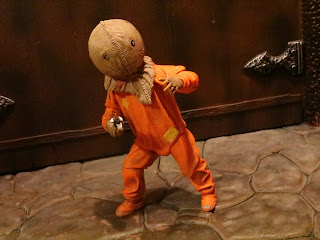 * Sam's a smaller figure compared to most other NECA Ultimates, but he has nearly the same articulation. He's not super articulated but there should hardly be a pose you'd want to put Sam in that you can't get with this guy. The double swivel/hinged elbows really work nicely to allow for intricate arm poses and his neck and head have three balljoints total, allowing for some really expressive posing there, too. 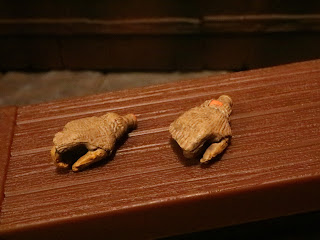 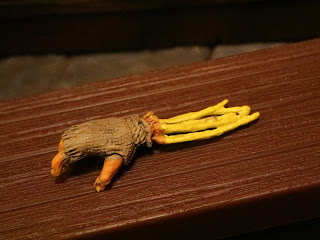 * Sam also comes with a severed right hand from his battle with Mr. Kreeg. It's posed as if it's crawling and it's trailing some pumpkin gut-like innards behind it. Seriously, NECA really throws some great little surprises into their figures, don't they? 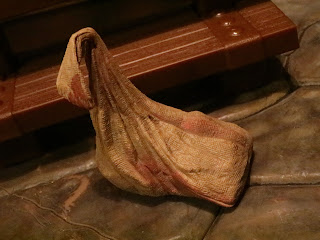 * Sam knows that you gotta have a sturdy bag for trick 'r treating (my grandma called it Halloween'n) so he comes with his large sack that's filled with... well, who knows? It's got a lot of blood on it, so maybe we don't want to know? 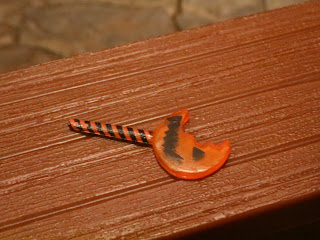 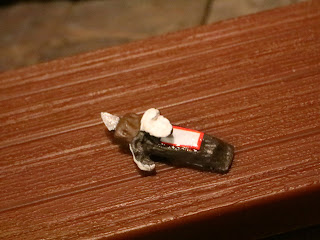 * Here's his chocolate bar with a blade sticking out of the tip. Looks like a Snickers bar to me. I think this accessory is reused from the Cult Classics figure from 2008, though the paintwork is definitely different. 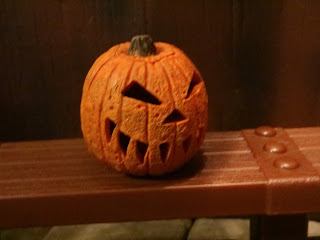 * Sam includes two jack o' lanterns, the first of which also seems to be reused from the original figure. This is still a great sculpt, though (both inside and out) and it fits with the figure oh so well. 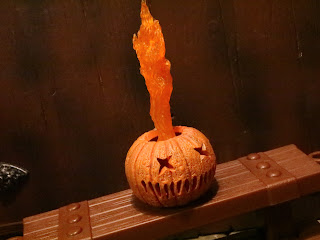 * While the original Cult Classics Sam figure came with the flaming jack o' lantern, this one is a different sculpt. I love the X-shaped eyes, as it makes the pumpkin look rather concerned about what is going on. 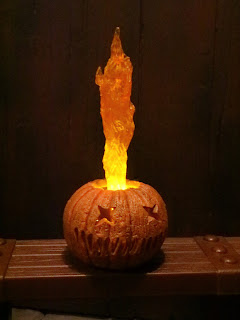 * It also lights up! Push down on the "flames" and an LED inside causes the flames to look like they're launching up, just like like in the film. This is brilliant work! Sam is easily one of the best single action figure releases of 2019. He's an Epic figure and definitely lives up to his title of being an Ultimate Sam. What more could you want from a Sam figure? NECA again shows why they're one of the best companies in the toy business with another amazing release that truly is worth every penny you pay. Nobody does accessories like NECA! While I doubt we'll ever get anyone else from Trick 'r Treat, NECA has made a perfect Sam to stand alongside other horror icons in your collection. Pick him up now so you have him ready for your display come Halloween 2020!