Wrapping Up 2019: Skeletor and Panthor from Masters of the Universe ReAction by Super7 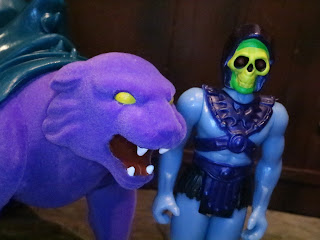 Is this the last "new" Masters of the Universe ReAction product from Super7 that I'll be reviewing? It's possible! It seems like in preparation for a major refocusing on the brand tied in with the 2 upcoming Netflix shows and the "perpetually in development but now seemingly cancelled" movie, Mattel has been ending the licensing agreements they have had in place with many other companies. Of course, Funko's seemingly ended last year but now it's back in effect, so maybe something similar will happen with Super7 as well? Anyways, I reviewed He-Man and Battle Cat on Tuesday and today I'm looking at Skeletor and Panthor. Whenever Battle Cat shows up you just know that Panthor is going to follow, don't you? Let's check out this two pack after the break... 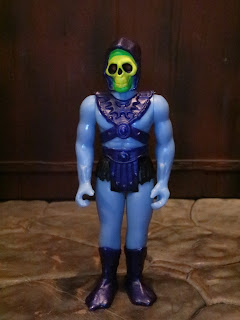 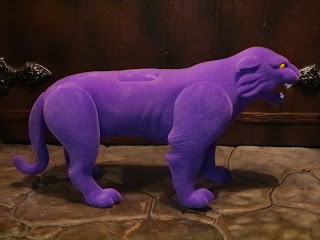 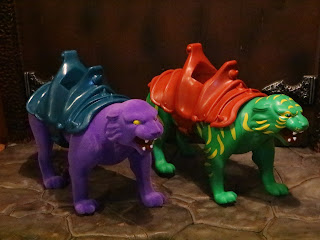 * Panthor and Battle Cat use the same sculpt and same saddles, just with different colors. Panthor also has flocking while Battle Cat doesn't, just like the vintage toys. 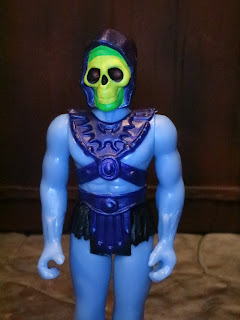 
* This set includes a Skeletor who, sculpt wise, is similar to any of the other ReAction Skeletor figures released. The biggest difference here is that Skelly's purple outfit parts have a slightly metallic sheen to them. It looks quite nice and while it's not as noticeably different as He-Man's metallic paint apps, it still looks good and sets this figure apart as being a bit special. 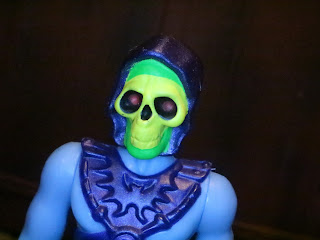 * I like the Skeletor headsculpt in the ReAction line as it's rather creepy and evocative of the earliest minicomic art by Alfredo Alcala while still having a vintage Kenner feel. 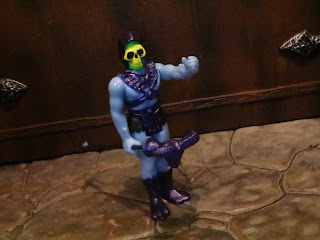 *   If you've ever picked up a retro figure like this, you know what to expect: 5 points of articulation and all swivel joints. Skeletor feels quite well made and sturdy. Super7 has been very consistent in the quality of their ReAction lines over the past couple of years. 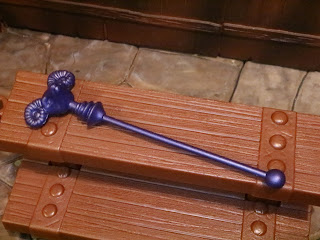 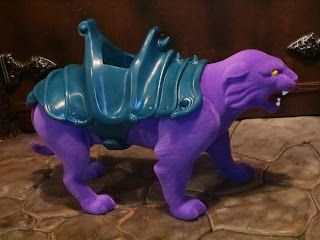 * Cringer looks fantastic. Not only is the size of the cat pretty good in the line but the fact that he's covered in purple flocking is excellent.

*Of course, you've a really cool saddle as well. Just like Battle Cat's it's designed to allow Skeletor to slide into the middle via a trapdoor, kind of like the vintage Kenner Dewback and Tauntaun. 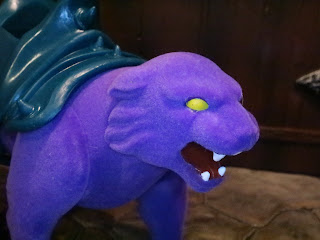 * I'm A-OK with this headsculpt and I actually like it a little better flocked.  He really looks a lot like the vintage toy. The yellow eyes and bright white teeth definitely cause this one to pop, don't they? 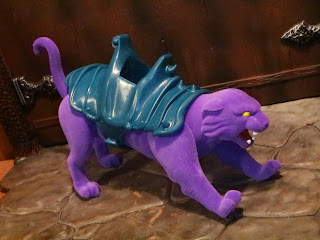 * Panthor is articulated, which means he's actually more articulated than the vintage toy (which had no articulation at all). The swivel hips and swivel tail do make this guy kind of fun to mess around with. I like making him look like he's pouncing. Go Panthor, go! 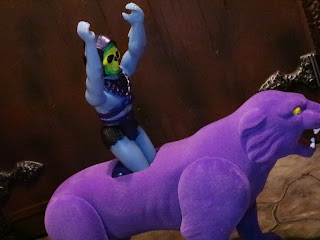 *  Like the vintage Tauntaun and Dewback, Skeletor is supposed to slip inside of a trapdoor on the figure's back. It doesn't work. I cannot get him inside and he just gets stuck. I think it's Skeletors feet that get in he way.

*There are also no "fake legs" on the side of the saddle. That helped to sell the illusion with the Tauntaun and the Dewback, but here it looks kind of awkward when you look a figure sitting "inside" Panthor, even with the saddle on. 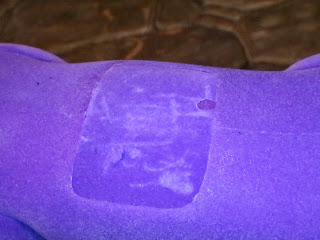 * I tried to get Skeletor inside but never could. All that happened was that Panthor's flocking ended up getting scuffed up and started to fall off. Grrr!! That really, really shouldn't happen after one use, should it. 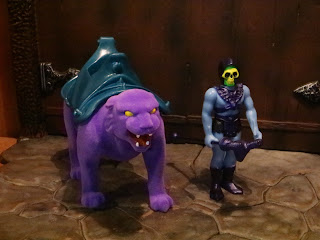 Like with Battle Cat and He-Man, Skeletor and Panthor look fantastic. Unfortunately, I cannot get Panthor's trap door to work with Skeletor and the flocking is already falling off of the door. Seriously, what the heck? That really should have been apparent to anyone who tested this item. I love the look of these two, but this one really only warrants a Good rating. It's good for displaying them separately, but just let Skeletor walk! He can't really ride Panthor and you'll end up damaging Panthor's fur.

I've reviewed so many toys of Skeletor/ Keldor that he has his own review archive. Check out Snake Mountain for more Skeletor reviews!