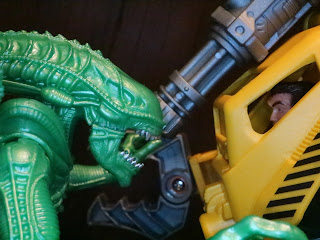 Today is my fifth review from Lanard Toys' Alien Collection and this is one of the "Xenomorph Attack" sets. These sets are $15 bucks each (the Xenomorph Swarm sets are $10) and include the two larger vehicles from the line. This set features the Super-Power Loader but it also comes with a green Warrior Alien and a Colonial marine. The scene in Aliens with Ripley using the Power Loader to fight the Alien Queen is one of the coolest fight scenes in movie history, thus the Power Loader always seems to make its way into Alien toylines. While Alien Warrior is a new sculpt for this line, the Power Loader is reused from a previous The Corps release from about 5 years ago. Still, it does work pretty well as the iconic vehicle. Let's check this set out after the break and see if it's worth picking up... 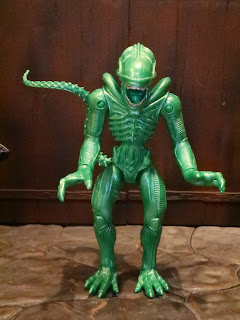 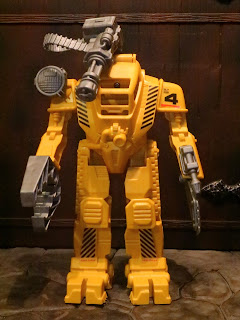 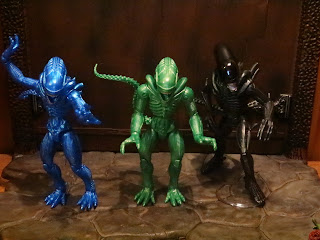 * This set's green Alien Warrior is in the middle while the blue Xenomorph Warrior from one of the Alien Swarm sets is on the left. They share the same sculpt, so they're just two different colorways of the same mold.  All the way to the right is the Warrior Alien from Kenner. I think these guys blend in with the Kenner line fairly well and scale quite nicely with those figures. 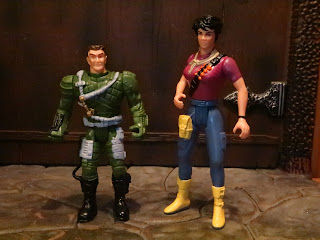 
* The human figures in this line definitely don't work with the vintage Kenner line, though. The Colonial Marine is on the left while Kenner's Ripley is on the right. He's kind of short, isn't he? 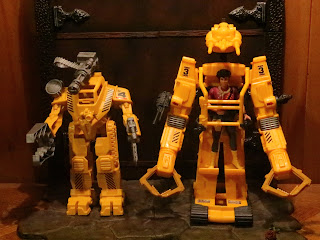 * On the left is Lanard Toys' take on the Power Loader while the classic Kenner Power Loader is on the right. The Kenner one is obviously superior but I do like how similar the colors are. Also, it's kind of cool that Kenner's Power Loader is #3 while Lanard's is #4. Did they intentionally make their sequential with Kenner's? 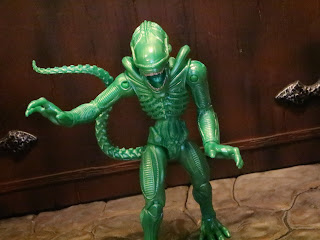 *  I love this guy! The Xenomorph Warrior uses the same body as the Xenomorph Drone but now it is cast in a great metallic gree plastic. It definitely feels like an homage to the Kenner Hive Wars Warrior Alien (only in a different color), or maybe even a tribute to the Mantis Alien, who was based on the mold of my beloved Gorilla Alien. The sculpt is fantastic here with lots of excellent detail. 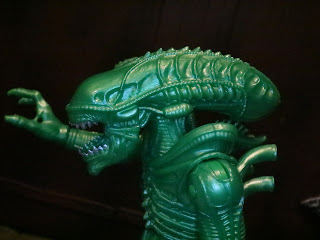 *  The Warrior Alien headsculpt is different from the Drone's, showcasing a look more in line with the Xenomorphs from Aliens rather than the Big Chap from Alien thanks to the bonier, more textured skull. 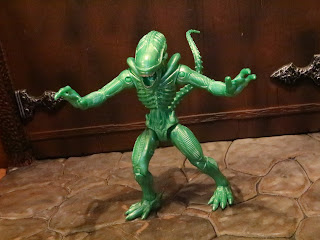 * Lanard's Xenomorphs are very well articulated and are definitely the selling point of this line. They're just really fun figures to mess around with. 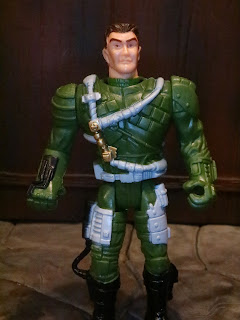 * The Colonial Marine is.... uh, a figure. It has five points of articulation and it's pretty solidly built. Seriously, this doesn't even feel like a figure from The Corps. It looks like a dollar store figure rather and seems very out of place. It's here, though, and it's not breakable. Kids will have someone to fight their Xenomorph, so at least there is that. 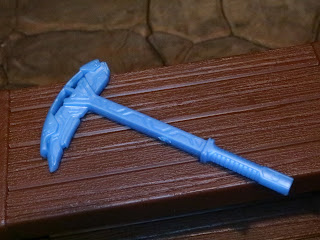 * Rather than come with a gun, this Colonial Marine comes with a pickax of some sort. It's a really weird accessory for the line but it does look like "futuristic" enough to possibly be an entrenching tool or something carried around by the Colonial Space Marines. It definitely has some nice detail on the sculpt. 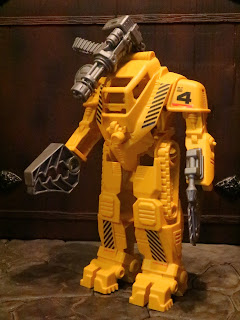 * While it's a reused piece, I really do like the look of the Power Loader. In any other color this would like like any other mech but here, in this exact shade of yellow, it really does resemble a modified version of the Power Loader. Definitely something that the Space Marines might have modified to use in some sort of offensive capacity against the Xenomorphs. The stickers are nice and give it a little bit more "oomph" in the design front. 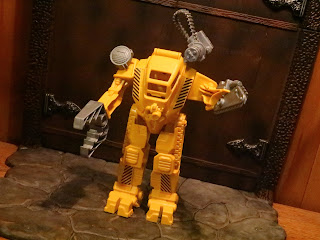 * The Power Loader is articulated, featuring swivel arms and legs, a balljointed mini-gun, and an opening and closing claw on the right arm. 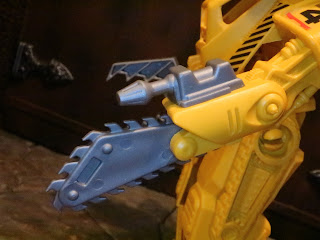 * I love the chainsaw and laser gun on the left arm. The chainsaw blade looks fairly nasty! It also moves around a bit, though I'm not sure how intentional that is. 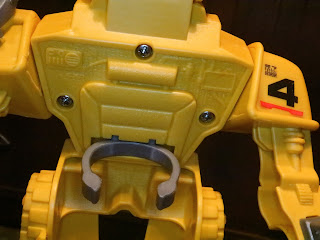 * The cockpit opens and features a clip to hold a figure in place. There's actually quite a bit of detail inside the cockpit, too. 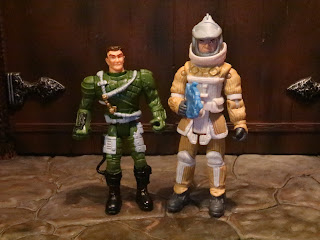 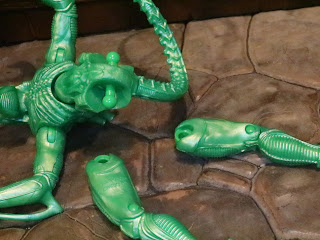 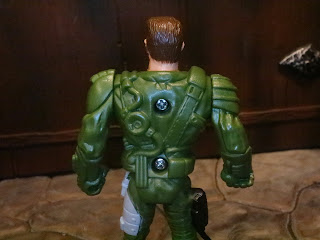 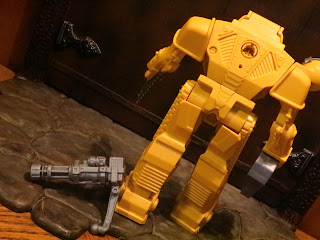 * The balljointed mini-gun seems like an amazing feature but it tends to fall off pretty easily. 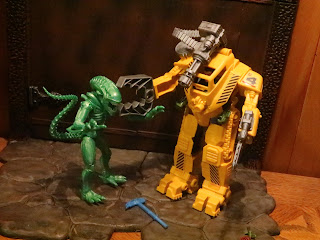 I love the Alien Warrior, and it's clear that all of the aliens in this line (whether it be drone, facehugger, or Alien Queen) are the high points of the line. The Power Loader is pretty cool too, actually, though it's not even as good as the Kenner version which came before it nearly 30 years prior. The Space Marines in this line are truly terribly, though. Lanard makes some really cool 1/18th scale figures, so why they insist on using these lame molds is beyond me. This set is a Good and a 1/2 set with a great Alien warrior, an OK Power Loader, and a terrible Space Marine. This might be the easiest pass of all the sets, but for the price there's still some value here.