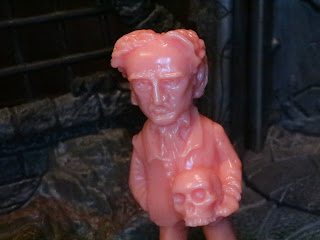 I really like HH Toys' Mythos line (it just made my list of my 10 Favorite Toylines of 2019) and I'm super excited that they're branching beyond the works of H.P. Lovecraft to cover the works of more writers of "Weird Fiction." At the end of January HH Toys released their second expansion for the Mythos line, which focuses on the work of Edgar Allan Poe. While I doubt most students read Lovecraft in school as assigned reading, the works of Poe are absolutely a major part of many English curriculum. Poe surely is one of the most recognizable authors around (both for his appearance and for his works) and it's great to see him in this line with Lovecraft (whom Poe inspired). This was a very limited run but apparently HH Toys will be making more of these soon, so keep your eyes open! Let's check these out after the break... 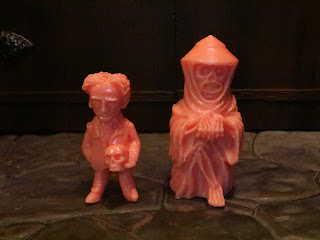 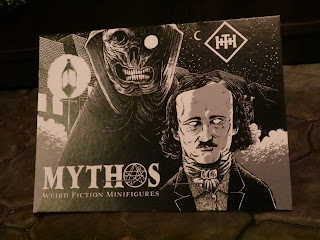 
* Sam Heimer puts out some fantastic art and the header card for the pack is worth keeping (the pack is sold in a plastic bag with the cardboard header card stapled on). I love the wonderfully eerie atmosphere the art evokes! 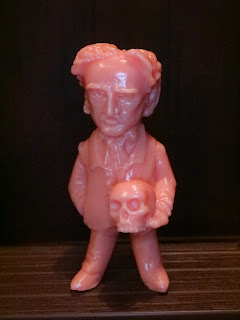 * I'm sure if you showed this minifigure to nearly anyone who has graduated high school they would recognize it as Edgar Allan Poe! The headsculpt is caricatured a bit, but features a fantastic likeness. The hair and the slightly uneven features really capture Poe's visage quite well. He's looking pretty casual; despite being dressed in a fancy outfit he's just chilling with one hand in his pocket and the other holding a skull. 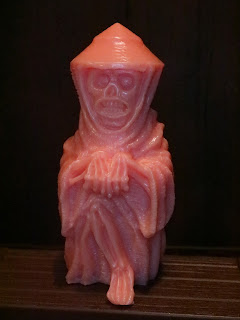 * The Red Death, from the Mask of the Red Death or The Masque of the Red Death, is a really cool figure. The mysterious, unnamed harbinger of death from the story is rendered as a creepy, skeletal figure covered in a robe. He's a tall mini (around 2 5/8ths inches) and would be even taller since he's depicted in a bit of a crouch. This one has some fantastic sculpting and is rather terrifying indeed! 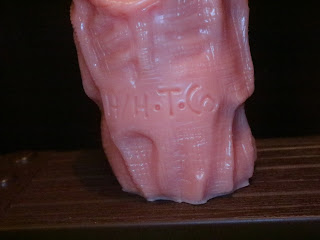 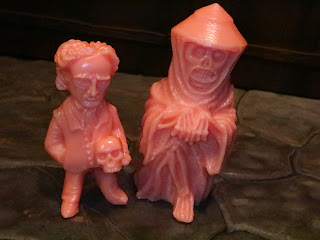 * While the standard Mythos figures have been cast in a softer PVC, feeling more like the traditional M.U.S.C.L.E. and Monster in my Pocket figures that inspired them, this set is made from resin, giving them a "harder" feel with a few rougher edges. I do prefer the more rubbery figures, but these still look great on the shelf and have excellent detail. 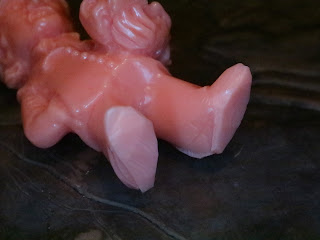 * There's definitely a rough texture on the bottoms of the figures. It must be harder to mold resin minifigures as cleanly as the PVC/ rubber figures as other resin figures I own have similar issues. The bodies themselves look grand, but the bottom edges look off for sure. 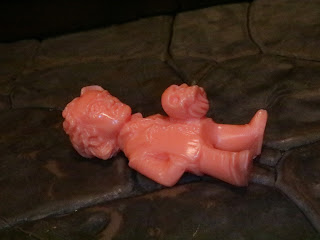 * Poe has a tough time standing up, and I doubt it's due to too much cognac. Instead, it seems that the bottom of the mold is uneven, causing Poe to tip backwards. I believe I can easily fix this with a little sanding, but it is a bit annoying. 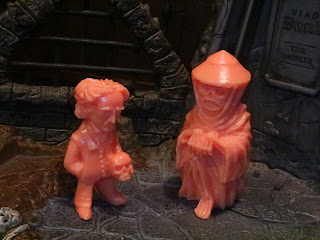 This is a pretty cool set and I'm curious to see where HH Toys continues to take this line. I really like the idea of expanding beyond Lovecraft and Poe makes a great next logical choice for expansion (even if there aren't as many possibilities for figures from his works). I don't like the resin figures as much as the PVC minis (they're also a bit pricier) but considering these are truly a small run toyline with a very niche, very unique concept, I'm still delighted to have them. This is a Great set, though if you like them you'll have to wait for HH Toys to release a second run as this release is nevermore!