This is the Way: Han Solo (Endor) from Star Wars: The Black Series Phase IV by Hasbro 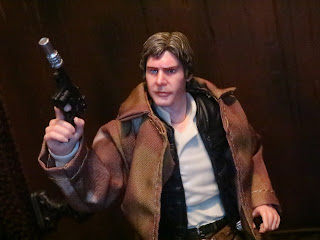 This weekend prepare yourselves for a mini review series looking at the heroes of the Rebellion during their mission to the forest moon of Endor! The most recent series of figures from The Black Series includes Han, Luke, and Leia in their Endor gear, all three of which were repacked from the exclusive Heroes of Endor set which was intended as an SDCC 2020 exclusive (the set also came with Paploo and a Speeder Bike). I waited for the single released, though, and wow! This is an impressive set of figures! Today I'm starting off with General Han Solo decked out in his cool camouflaged trench coat from Return of the Jedi. While his lower body is reused from Han Solo in ESB black coat the rest of the figure is new, giving you the option to create quite a few different looks for Han. Ready to take a look at this one? Then join me after the break... 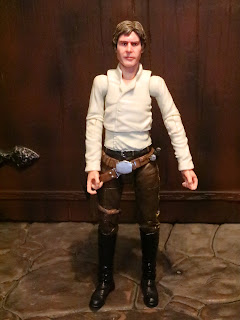 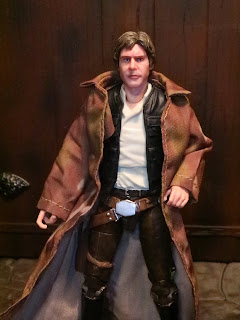 The Positives:
* I'm going to work through all of the different looks for this figure but first up is the basic look you get for the figure out of the box which is Han Solo in his camouflaged trench coat. Han's wearing the brown pants, holster, and a similar shirt to what he wore in Empire and the first half of ROTJ but the trench coat definitely gives him a very different look, deviating from his typical "smuggler" gear by adding a military feel to Han's wardrobe. It's a great look and Hasbro did an excellent job. Despite the difficulty of crafting realistic looking complex soft goods in the 6 inch scale Hasbro excelled, giving Han a coat that looks accurate and not at all bulky. 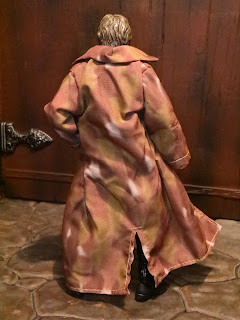 * The coat has a very nice camouflage pattern to it. It's quite complex with more colors than previous toy versions of Han in this outfit. The coat also "moves" well with the figure. The material kind of stays where you hope it does during posing which is quite a nice feature. 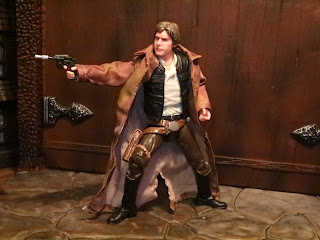 * The articulation is excellent, just like on the Bespin Han Solo figure, but with the newer elbows with a better range of motion. Han's coat doesn't get in the way at all. In fact, it very much flows with the figure. This is a really, really fun figure to pose as the trench coat makes it feel more dynamic. 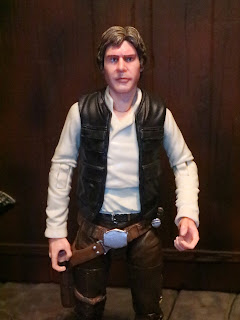 * During his time on Endor Han ends up taking off his coat so it's very likely that you'll want to have your Han displayed with his coat off, too. Here he is! His removable vest looks excellent and fits the figure perfectly. You can take the vest off to have Han in his outfit after being rescued from the Carbonite (ignoring that he's still got the belt) though the shoulders do look a bit odd without the vest. 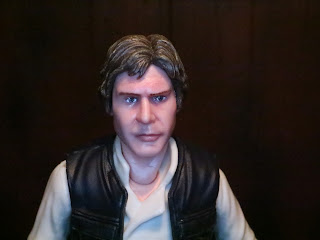 * This is a really, really good Han Solo portrait. Harrison Ford clearly looks different in Return of the Jedi and I think Hasbro captured his likeness there quite well. The photo real/ face printed portraits don't always look as good in pictures as they look in person because, in hand, Han is superb. 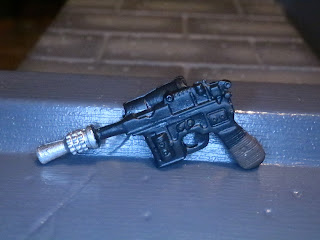 * Han always includes his trusty DL-44 blaster pistol. It's still a great sculpt with nice paint applications on it. It fits in his hands perfectly, too. 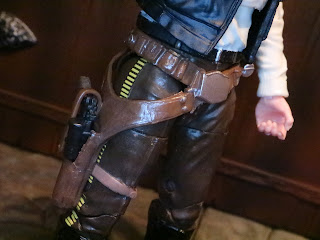 * Han's holster is very nicely painted to give it the look of weathered leather and it features all of the necessary details. Of course, it also perfectly carries the DL-44 blaster at Han's right hip. Also, check out the yellow stripes on Han's pants. They look great and are really neat and clean. 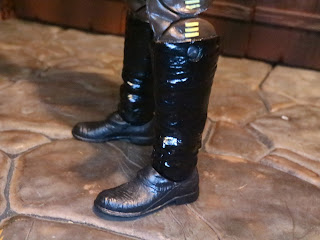 The Negatives:
* My only complaint here is that the bottom of Han's boots don't match the top. The tops are very shiny while the bottoms are matte. They ought to be able to match these colors, right? 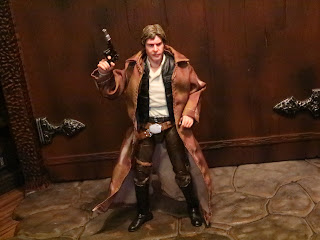 Hasbro has released quite a few excellent Han Solo figures in this line and Han Solo in his Endor trench coat is another great one. A Great and a 1/2 one, in fact. His outfit looks fantastic and with the removable coat and vest you can almost get every look for Han from Return of the Jedi. It's amazing to look and see how the line has improved over the past 7 years, isn't it? Tomorrow I've got another review of a Rebel hero in Endor gear. Who do you think is coming up next? Check back tomorrow to find out!

I've reviewed so many Han Solo figures that he has his own review archive. Check out the Kessel Run for all of my Han Solo reviews!