This is the Way: Darth Vader from Star Wars: The Black Series Phase IV by Hasbro 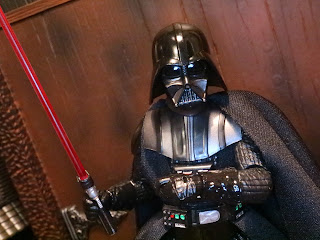 Earlier this year Hasbro released an updated version of Darth Vader in their 40th Anniversary collectors' line for The Empire Strikes Back. It was a swift seller and recently Hasbro re-released it in The Black Series Phase IV. We received a Return of the Jedi Darth Vader first, way back in 2014 as part of the Phase II line followed by an A New Hope Darth Vader in 2017 in the 40th Anniversary Collection, so now we have a collection of Original Trilogy Darth Vaders! While at a glance this might seem like just a rerelease, Hasbro really did put a lot of effort into this version of the Dark Lord of the Sith in order to give us the best Vader yet. Consider this review as a tribute to David Prowse, the body of Darth Vader, who passed away just a little over a week ago. Ready to check out a new version of one of the most menacing villains of all time? Then join me...after the break... 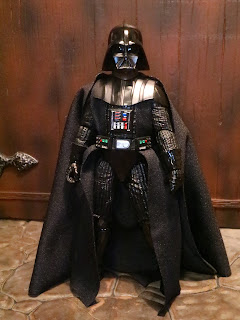 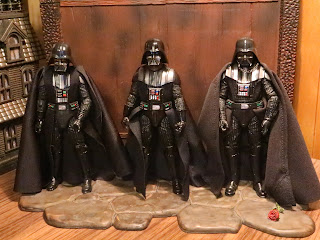 Comparison:
* On the left is the 40th Anniversary A New Hope Darth Vader, in the middle is the new Phase IV ESB Darth Vader, and on the right is the original Phase II ROTJ Darth Vader. As best as I can tell this new version of Vader uses some of the previous parts but has lots of newnewss such as a new torso and a new headsculpt. The articulation on the upper body definitely feels more like the modern figures as well, with better elbow articulation. 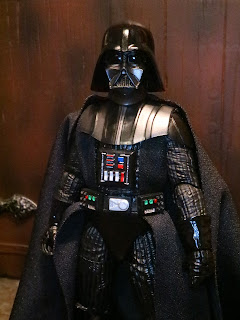 The Positives:
* While he might look similar to the previous Darth Vader figures, this one is absolutely the best yet. I love Vader's armor in ESB (his ROTJ armor is very, very similar) and Hasbro captured it perfectly. Every detail looks perfectly in place and all of the separate pieces like his codpiece and the armor on his chest fits together perfectly. It's taken some time to get a near perfect Darth Vader in the Black Series but the waist was worth it. 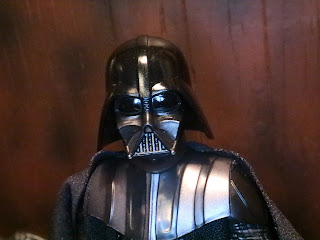 * The headsculpt is perfect. I definitely prefer this helmet to all of the previous ones we've received. A swappable portrait with the back of Vader's head exposed or one with Luke's face peaking through would have been welcome as well, but this standard head is the most important element and Hasbro clearly delivered. 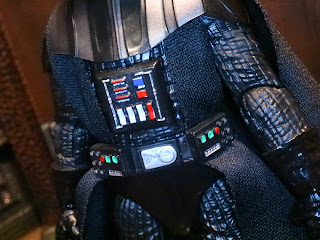 * The chest panel and all of the paint details on Vader's chest and belt are excellent. It's really fun to compare all of the little buttons and lights with images from the 501st's website or the visual dictionaries to see the effort Hasbro put in here. 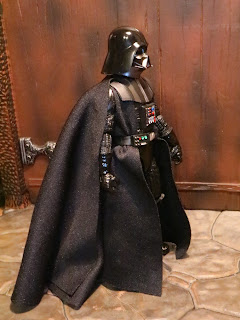 * Darth Vader's cape is quite luxurious feeling. He has both his over cape and the robe that fits under his armor and they're nicely tailored and look fantastic. They make for a very striking, very imposing looking figure. 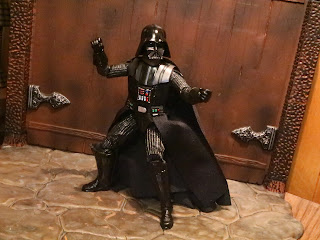 * Vader's articulation is as good as any of the previous figures and even better because of the new elbow joints with a wider range of motion and the "butterfly" shoulder joints that help give him more lateral motion in his shoulders. He's the most solid feeling Vader we've received yet and the most fun to play with and pose. 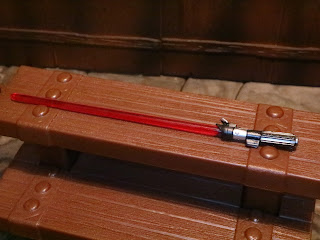 * This is the best Darth Vader lightsaber we've received in the Black Series. It's highly accurate, sized well, and it has a very deep, red blade. I love how dark the blade is in person. It looks so much better than a pinkish blade (even though that may be more "accurate"). 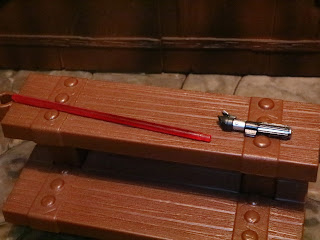 * Hey! You can remove the blade of Vader's lightsaber without fear of the blade breaking. It's a sturdier peg and it slips right in. While I'd still love to get the hilt as a separate piece this lightsaber turned out nicely. 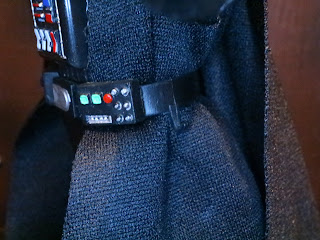 The Negatives:
* My only real complaint here is that it's nearly impossible to hang Darth Vader's lightsaber from the hook on his belt. The hook is very flimsy and rubbery and I just cannot get the hook to catch on the loop on the lightsaber hilt. 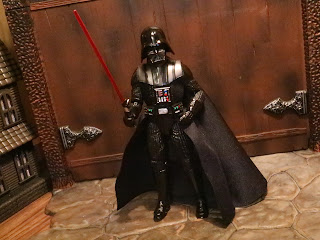 This is the best Darth Vader we've received in the Black Series yet and it's nice to have the trifecta of Darth Vaders on the shelf. Now that Hasbro has been improving the articulation and sculpt so much I'd really like to see them move towards things like gesturing hands, which they do all too rarely in this line. This Vader has a left hand that looks like it's more designed for firing a blaster but wouldn't it have been cool to have a gesturing hand for reaching out to Luke during the duel on Cloud City? Or a Force choking expression. Hasbro's doing amazing and this is a Great and a 1/2 figure, but there are still some cool little things they could do to make Vader even better!
Interested in more Darth Vader/Anakin Skywalker stuff? I've checked out quite a few plastic renditions of Anakin Skywalker over the past few years including smaller Anakins in the Micro Machines Classic Characters pack, the Royal Starship Repair, the Star Destroyer/ Space Fortress Transforming Action Set, and the first set of Episode 1 Micro Machines, the Black Series Titanium Darth Vader, the 6 inch Black Series Anakin Skywalker, Darth Vader, the 40th anniversary Legacy Pack Vader, Anakin Skywalker (Padawan), the Archive Series Anakin Skywalker, the Walgreen's exclusive Darth Vader (Emperor's Wrath), the Centerpiece Series Darth Vader, the Hero Mashers Anakin Skywalker, Luke Skywalker Vs. Darth Vader 2 pack, and the Jedi Speeder with Anakin Skywalker, the Micro Force Advent Calendar with Darth Vader w/ snowy boots, the Funko POP! Darth Vader [Bespin] #158, and the Hikari Minis Darth Vader.
For more reviews from Star Wars: The Black Series Phase IV check out the following:
Admiral Ackbar
The Armorer
Cad Bane
Garazeb "Zeb" Orrelios
Han Solo (Endor)
Incinerator Trooper
Luke Skywalker (Endor)
The Mandalorian
Princcess Leia Organa