This is the Way: Plo Koon from Star Wars: The Black Series Phase III by Hasbro 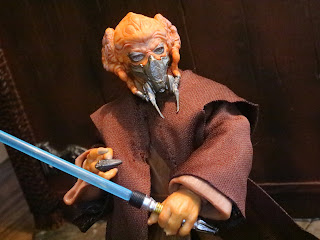 Since I just took a look at the Episode II version of Anakin Skywalker a couple days ago let's now take a look at another figure from the Episode II themed last full series of Star Wars: The Black Series Phase III figures. Today I'm checking out Plo Koon, the Jedi Master who had a pretty significant role in The Clone Wars but who didn't have a single line of dialogue in the Prequels despite appearing in all three films. Plo Koon is a Kel Dor (but not Keldor!) from the planet Dorin who fought in many battles during the Clone Wars, though he might be most well known to fans for being the Jedi who discovered a young Ahsoka Tano and brought her back to the Jedi Temple to train. Considering that the Black Series has been going for over 7 years now (I received my first series figures around the week that my daughter was born) it's surprising that Hasbro is just now getting around to so many Jedi figures. In years past Hasbro released as many Jedi as they could but for quite a few years they've largely avoided Prequel based figures. It's nice to see things loosening up, though, as we've received some great stuff from the Prequels and The Clone Wars lately. Let's take a look at Master Plo Koon after the break... 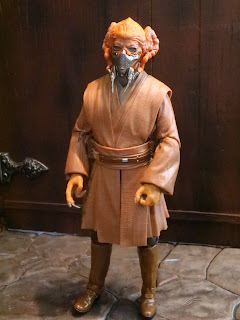 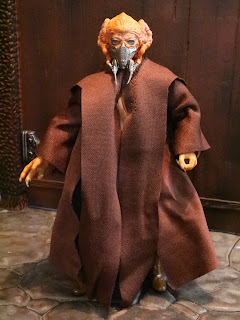 The Positives:
* Before we get to the headsculpt (which is the best part of Plo Koon) we have to talk about his robes. Plo Koon reuses Mace Windu's body with a new head, new hands, and a new robe. Plo Koon's robe is a bit different than many of the Jedi robes as it fits over his head and around his neck, rather than just fitting over his arms and shoulders. It's a great looking garment and seems quite accurate to what we see in the films and on The Clone Wars. It's not easily removable as you'll have to pop off his head but, then again, there's not really a reason to remove it: Plo Koon even wore his robe on Geonosis in Attack of the Clones while the rest of the Jedi just wore their tunics, so he seems to always favor keeping it on. 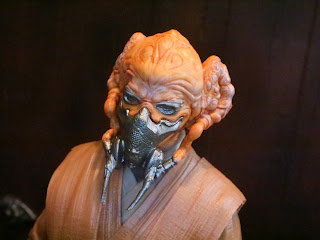 * Plo Koon's headsculpt is amazing. The work on his head and its unusual anatomy is impressive. This is easily one of the best headsculpts we've seen this year from Hasbro in the Black Series and they've really been on a roll, so that's saying something. The work on his breathing mask and eye covers is impressive, too. This is some of the highest quality work I've seen on a 1/12th scale figure in recent memory for sure. 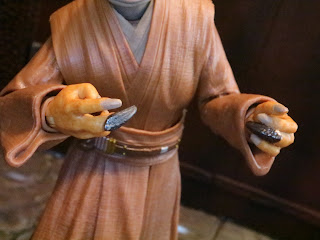 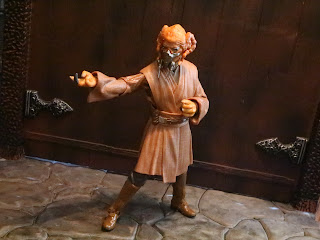 * Since Plo Koon reuses Mace Windu's body he has all of the excellent articulation that Mace had including the "butterfly" shoulder joints. He's durable and lots of fun to pose. It's great to finally have a small group of Jedi now, isn't it? We really need some more, though. Aayla Secura, Ki-Adi-Mundi, Quinlan Vos, and Luminara Unduli are some of the highest on my wish list. 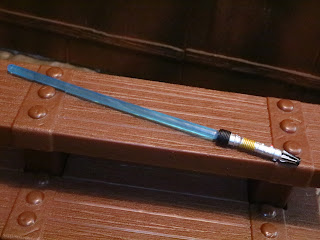 * Like any Jedi, Master Plo Koon comes with his lightsaber. It looks excellent with a translucent blade and a well painted hilt. 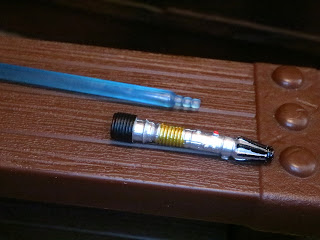 * Hey, guess what? The tip of the lightsaber blade doesn't feel as flimsy as most past saber blades. Furthermore, the new design on the tip makes it easier to remove and keeps the blade straighter in the hilt! 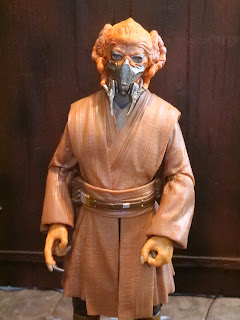 * Plo Koon reuses Mace Windu's body, which had a fantastic sculpt. The colors are redone and look quite nice, too. But there's a problem...
The Negatives:
* Plo Koon has a very different style of tunic underneath his robes (which he wears all the time as far as I can remember) that has a very unusual, high collar. Hasbro tried to fudge it by using the "non-removable" robe but it's clearly still incorrect. 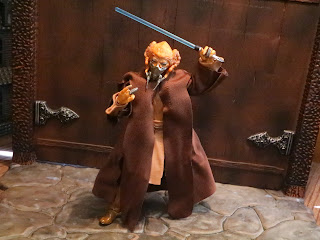