This is The Way: IG-11 from Star Wars: The Credit Collection by Hasbro 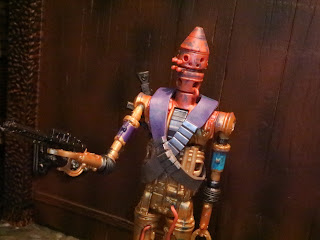 Hasbro has been releasing 6 inch scaled Star Wars figures in multiple different lines this year. Besides the main Black Series Phase III and Phase IV (which include various sublines like Gaming Greats) we also have the 40th Anniversary Line for The Empire Strikes Back and now we have the Credit Collection. Inspired by the amazing artwork shown at the end of each episode of The Mandalorian during the end credits, this line of repaints uses different color palettes to merge the concept art with the Black Series figures Hasbro has already released. Since The Mandalorian revolves around a bounty hunter, we also get a galactic credit roleplay sized monetary piece. So, The Credit Collection: Based on the art shown during the end credits and including a credit. Get it? Word play! All of the figures in this series have been retailer exclusives and IG-11 here is a GameStop exclusive. GameStop is the only store where I can reliably find Black Series exclusives and I stumbled upon IG-11 during a sale. I wasn't originally planning on picking him up as the standard IG-11 was pretty a pretty average figure but in hand I really liked the color scheme. I usually like my Star Wars figures to be able to fit "in-universe" but IG-11 seemed like he could be just another IG Assassin Droid who has been eclectically painted and then worn down by the elements. Let's take a look at The Credit Collection IG-11 after the break... 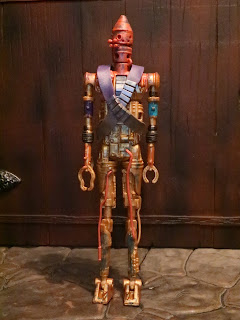 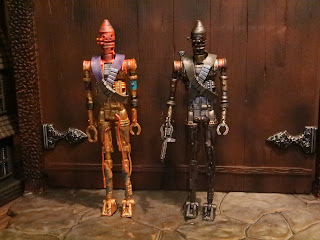 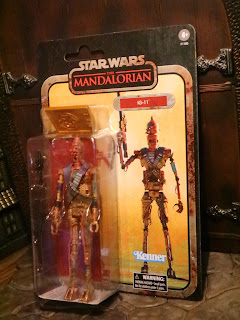 The Packaging:
* Thee packaging is quite nice and if someone were inclined to keep these carded I couldn't say I'd blame them. They're on a vintage Kenner styled card, like the 40th Anniversary figures, but rather than a picture from The Mandalorian TV series you get a concept art image that was shown at the end of one of the episodes. This is some slick presentation and it's really, really cool to see The Mandalorian title in the box at the top under the Star Wars logo. 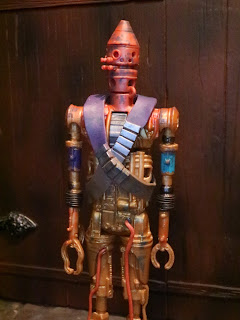 The Positives:
* This version of IG-11's main selling point is his cool new paintjob. Inspired by the concept artwork, IG-11 has some unusual colors on him and his main body itself is sort of a rust colored orangish-red. I really like how eye-catching it is, particularly with some of the more unusual color patches like the purple shoulder straps and the blue and purple on his biceps. The sculpt is still strong and while it's not 100% IG-11, it's still very recognizable. 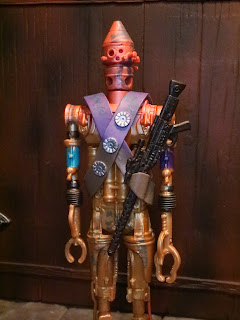 * The back of IG-11's bandolier is cool as the droid is toting around what appear to be mines of some sort. He's also got a holster for his DLT-20a rifle. It slides right in the holster and looks fantastic. There are some great weathering effects on the figure, too. 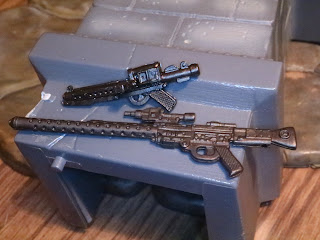 *  Like IG-88, IG-11 comes with two rifles: The previously mentioned DLT-20A and a modified E-11. They're a bit smaller, which means they weigh less and can work nicely in IG-11's smaller, spindlier arms. They're also specially design to fit in the proper hands: The E-11 (Stormtrooper blaster) fits in the right hand while the DLT-20A (longer rifle) fits in the right hand. There are pegs on his wrists which plug into the weapons to add extra support. The weapons are mostly black though the DLT-20A does have a bit of a copper sheen to it, it seems. 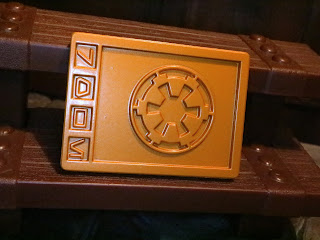 * Since this is The Credit Collection each figure comes with an Imperial Credit. You can see them stacked on a table in this picture from the show. It looks like they're pretty accurately sized. The Credit is a simple plastic piece that meant to be sort of a prop replica rather than an accessory intended for use with the figure. Across the side of the credit you can see the Aurebesh characters that spell out ROWE. What's that mean? I can't find an answer anywhere! 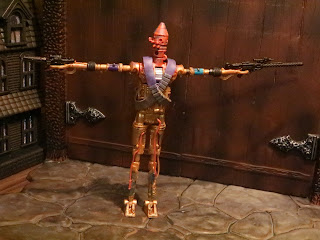 * IG-11 has the same articulation as IG-88, which is both a blessing and a curse. There are some interesting joints that are really integrated into the sculpt but...
The Negatives:
* The hips are basic swivels, the elbows are quite frustrating, and the ankles are simple hinges. He's just not a terribly fun figure to pose or play with, which is a shame. 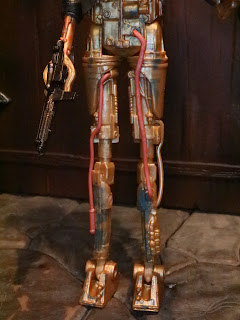 An Improvement?
* Also like IG-88, IG-11's legs are long and spindly, possibly with the prospect of "wilting" over time. While both IG-88 and the previous IG-11 have had that issue, I will say that The Credit Collection IG-11's legs feel more solid than the previous release. In addition to him being tall and thin, the softer legs have really put this sculpt in danger of tipping over. Did Hasbro actually fix things here? Only time will tell. 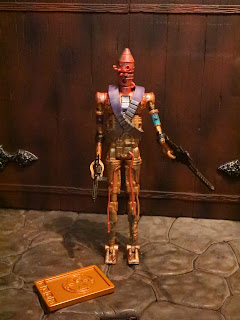 While you're going to have to pay Hasbro's exclusive tax (fortunately I bought mine during a 20% off sale) I actually think this version of IG-11 edges out the previous one a bit. While not screen accurate, the colors are quite cool and definitely make for an eye-catching figure that still looks like he could be an actual part of the Star Wars galaxy. Furthermore, I really do think Hasbro used a sturdier plastic on the droid's legs which should keep him standing up straighter over time. If I'm not just imagining it then Hasbro did fix one of my biggest complaints with the previous figure. It really feels to me like Hasbro was blindsided by the popularity of the Mandalorian and they're kind of scrambling to get as much product out as they can. Had they known last year what they do now it's conceivable that we would have seen more product for The Mandalorian than for The Rise of Skywalker (which didn't get a lot of product to begin with). I'm giving this version of IG-11 a Good and a 1/2. Not everyone is going to want him but he's still a decent purchase and those collecting The Credit Collection should be pleased.
If you're a fan of IG-11, the droid who taught Mando how to love droids, then check out my review of the standard Black Series IG-11.
Posted by Barbecue17 at 12/12/2020